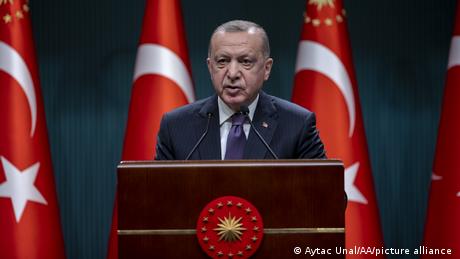 The United Nations' statistics leave no room for doubt: The situation in Afghanistan is dire. UN experts estimate that more than 18 million people in Afghanistan need help: That's more than half the entire population.

Hamid Karzai International Airport in the capital, Kabul, is central to overcoming the country's most urgent problems. At present, though, following the withdrawal of all international troops, it is no longer in operation. Getting the airport up and running again is imperative if urgently needed goods are to reach the country fast. And this puts Turkey in the spotlight of international diplomacy.

Turkey has been present in Afghanistan right from the beginning, when it took part in the initial deployment of the International Security Assistance Force (ISAF). At times, as many as 2,000 Turkish soldiers were involved. From June 2002 to February 2003, and again from February to August 2005, Turkish commanders were leading the entire 43-nation mission.

Securing the airport was a core part of the Turkish soldiers' assignment. Discussions between Turkish President Recep Tayyip Erdogan and his US counterpart, Joe Biden, about Ankara providing ongoing military support were already taking place on the fringes of the NATO summit in June, and it was rumored back then that the Turkish military would take over responsibility for securing the airport after the Americans withdrew.

It is therefore not surprising that the Taliban are currently holding talks with representatives from Turkey and Qatar about reopening the airport. However, it seems the Turkish government intends its involvement to extend beyond ensuring airport security.

Before the Taliban overran Kabul, Ankara still believed it could define a new role for itself in Afghanistan," says Kristian Brakel, a foreign policy analyst who heads the Heinrich Böll Foundation in Istanbul. This, he says, was in line with Ankara developing an increasingly independent foreign policy.

Brakel points to Turkey's attempt to make Istanbul the venue for peace negotiations between the Taliban and the Afghan government in the spring of 2021, which he says was a clear indication that it is using Afghanistan to try to raise its foreign policy profile. Those negotiations ultimately fell through when the Taliban canceled their attendance.

Nonetheless, the international community, as well as the United States, recognize that Turkey could play an increasingly important role in the region in future. This was why the German Foreign Minister, Heiko Maas (SPD), paid a visit to his Turkish counterpart Mevlut Cavusoglu just last weekend. NATO Secretary-General Jens Stoltenberg has also described Turkey as having a "key role" in dealing with the conflict.

Many Western observers believe that Turkey, as a Muslim-majority country, could have a special part to play in talks with the Taliban and that this is another reason to approve Ankara's involvement. However, this thesis should be treated with caution, as demonstrated by the debate about contradictory statements by Taliban spokesman Suheyl Shaheen.

Just a few weeks ago, in an interview with the BBC, Shaheen made it clear that "all foreign forces, contractors, consultants, trainers should withdraw from the country." At the end of August, he backtracked on Turkish television's Ahaber channel, stressing that the Taliban wanted a good relationship with Turkey. After all, he said, their two countries were "brothers in faith."

The Turkish president was glad to pick up on this. He, too, played the religion card. There was no contradiction between the Taliban's faith and Turkey's, he said — there was nothing in Turkey that contradicted their faith.

'You are the Taliban'

However, many Turks were determined that this should not, under any circumstances, be permitted to stand. They publicly vented their anger, particularly on social media, hitting back at the Taliban spokesman's statements under the hashtag #TalibanKardesimDegildir ("The Taliban are not my brother"). President Erdogan also got his share: The hashtag #SensinTaliban ("You are the Taliban") created an absolute furor on Twitter.

The clear message from the Turkish public was that the president was wrong and that as far as religion was concerned, Turkey and the Taliban had nothing in common. A tweet by the well-known actor, film director and author Ilyas Salman was widely shared. Let's not fool ourselves, he wrote: Apart from a "very small and radical percentage," not even the president's supporters would want the kind of life they would have in Afghanistan.

Despite often fierce domestic protest, people in Turkish government circles seem determined to establish solid relations with the new rulers in Afghanistan. One reason is that Ankara fears mass migration from Afghanistan to Turkey heading for the EU if the situation in the Hindu Kush remains unstable. Anticipating an imminent influx of refugees from Afghanistan, the Turkish government has already pushed ahead in recent days with the construction of a wall along the border with Iran.

However, the Turkey analyst Kristian Brakel believes it also has another motive. He suspects that Ankara aims to position itself as a mediator between the West and Afghanistan in order to polish up Turkey's foreign-policy reputation in Washington and Brussels, which, he says, "has been badly tarnished of late."

Turkey's relationship with many of its NATO partners is indeed more than a little tense. In some of the alliance's capitals, there has been considerable consternation at the fact that Turkey intends to protect its airspace with the Russian S-400 anti-missile defense system

As a reaction to Ankara's decision, Washington had even decided to exclude Turkey from the F-35 stealth fighter program. In addition, US-Turkish relations have been strained by the discussion surrounding the Turkish massacre of Armenians during the First World War. In the spring of this year, US President Joe Biden termed these atrocities in the early 20th century a genocide, provoking a storm of protest in Ankara.