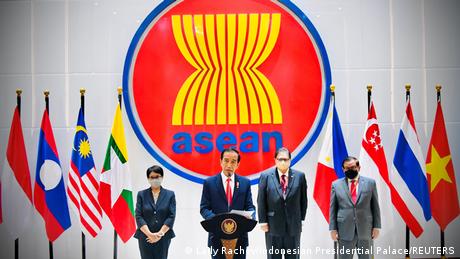 The calamity of the US withdrawal from Afghanistan over the past two weeks has drawn scathing rebukes of US foreign policy, while raising serious questions over how the US intends to project power in the future.

In Southeast Asia, the US has been working to shore up regional alliances vis a vis China. Last week, US Vice President Kamala Harris concluded a weeklong trip to Singapore and Vietnam, where she reaffirmed Washington's commitment to Southeast Asia.

However, Harris' Southeast Asia trip came amid the greatest foreign policy debacle for the US in decades.

Several Southeast Asian governments were forced to hurriedly evacuate their citizens from Afghanistan as the result of Washington’s decisions, and there are concerns that a surge of Islamic extremism in Afghanistan could increase the threat of terrorist attacks in Southeast Asia.

During a joint briefing with Harris on August 23, Singapore's prime minister, Lee Hsein Loong, said that "what will influence perceptions of US resolve and commitment to the region will be what the US does going forward."

In the decades after the end of the Vietnam War, US interest in Southeast Asia was typified in foreign policy circles as a form of "benign neglect."

However, with the rise of the region's economies, as well as the threat of a more assertive China, Southeast Asia became a key region for Washington, marked by the so-called pivot to Asia policy from the Obama administration in 2011.

"Southeast Asia always has a degree of angst about US staying in power in the region, but I don't think that Afghanistan moves the needle of their concerns very much," said Bonnie Glaser, director of the Asia Program at the German Marshall Fund of the United States.

The United States is a key economic and security partner of most Southeast Asian governments and has a treaty alliance with Thailand and the Philippines, as well as close defense ties to Singapore and Vietnam, one of its major partners in Asia today.

Washington has taken the side of Vietnam, Malaysia and Indonesia in their disputes with China over territory in the South China Sea.

But over the past several weeks, the hasty withdrawal from Afghanistan has forced some governments to question whether Washington will come to their defense if a violent conflict broke out with China.

Southeast Asia is not Afghanistan

For the most part, however, Southeast Asian governments are aware that US interests in their region are vastly different from what the US has tried to achieve elsewhere.

While US intervention in countries like Afghanistan revolved around anti-terrorism efforts and nation-building, in Southeast Asia, Washington's interests focus on improving already close relations with stable states.

Moreover, the US in Afghanistan tasked itself with providing much of the country's security, as well as bankrolling a weak and impoverished state.

Southeast Asia is home to some of the world's fastest-growing economies, from which American businesses can profit. The Southeast Asian bloc is America's fourth-largest trading partner, according to US government data.

Will Southeast Asia now get more US attention?

Some analysts in Southeast Asia are now watching whether the US withdrawal from Afghanistan will actually allow the US to engage more deeply in other key regions.

"The Biden administration came to office stating that it intended to recalibrate from Central Asia and the Middle East to the Indo-Pacific," said Chong Ja Ian, an associate professor of political science at the National University of Singapore. "Withdrawing from Afghanistan was part of this plan, except that it was very poorly executed," he told DW.

What matters most for Southeast Asian governments will be how quickly the United States moves to reinforce the message that the Indo-Pacific lies at the heart of American foreign policy, said Chong.

"Should the retreat from Afghanistan mean a more effective and robust recalibrated US presence in Southeast Asia, the United States may be able to maintain a presence and expand on its options, and limit any [Chinese influence] over its actions, in the region," he added.

Many Southeast Asian governments expressed confusion during the last years of the Trump administration, especially after he seemingly snubbed the region by not sending a senior official to the ASEAN summit in 2019.

And in the first months of the Biden administration, there were complaints that the US had lost interest in the region, the likely reason for vice-president Harris' visit in late August.

The trip was intended to "build on the Biden-Harris Administration's message to the world: America is back," Harris' office said in a statement before her visit to Vietnam and Singapore.

"Our partnerships in Singapore, in Southeast Asia, and throughout the Indo-Pacific are a top priority for the United States," Harris said while in the city-state.

As well as Harris' trip, US Defense Secretary Lloyd Austin visited Singapore, the Philippines and Vietnam in late July. In May, US Deputy Secretary of State Wendy Sherman visited Indonesia, Thailand and Cambodia. US Secretary of State Antony Blinken has also recently participated in ministerial meetings of the ASEAN bloc.

"The US withdrawal from Afghanistan certainly attests to the regional uncertainty of the US commitment," said Yun Sun, co-director of the East Asia program at the Stimson Center in Washington. "But the region is generally convinced that the US will not be able to leave Southeast Asia," she told DW.

US building alliances against China

Then there is the fact that Southeast Asia is a key area in Washington’s rivalry with China.

"From the US perspective, it is unrealistic to leave Southeast Asia, with its geographical, economic, historical and social connections, which are now compounded by the competition with China," said Sun. "In that framework, Southeast Asia is the frontline of the competition," she added.

This can be taken two ways by Southeast Asian leaders. Because Southeast Asia is an integral region in Washington's rivalry with Beijing, especially over issues like territorial disputes in the South China Sea and resource conflict on the Mekong River, regional governments can expect to maintain the attention of officials in Washington.

"Southeast Asia wants the US and China to compete for their attention, but countries in the region resent being forced to choose [between the two]," explained Sun.

However, because some regional governments "worry the US only cares about them because of China," American "staying power" could also diminish if Washington alters its current opinion of China as a major rival, the analyst added.