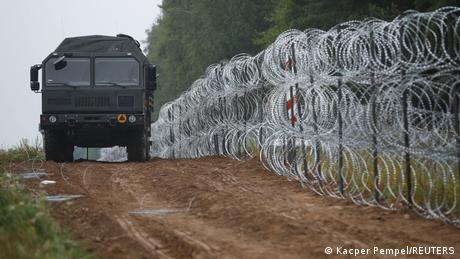 The Polish government on Tuesday asked President Andrzej Duda to declare a state of emergency at the country's border with neighboring Belarus.

The plan to impose a state of emergency along the border comes after some 3,000 migrants tried to enter the country from Belarus during August. Poland's government and the EU believes the unauthorized crossings and attempted crossings are being orchestrated by Alexander Lukashenko's regime in Minsk.

Once approved, the emergency rules would ban demonstrations in a thin strip along the border as well as obliging people to carry identity documentation. It would last for 30 days before requiring renewal.

"The situation on the border with Belarus is a constant crisis," Poland's right-wing Prime Minister Mateusz Morawiecki told reporters. "That is why we have decided to propose this solution to the president."

Migrants have also entered Latvia and Lithuania, two other EU member states bordering Belarus. Most of the migrants are from the Middle East and Afghanistan. Belarussian authorities have been accused of flying people into the country in order to send them into neighboring EU states.

The EU believes Lukashenko's strongman regime is trying to use immigration as a form of leverage against the bloc's stringent sanctions. Minsk

Poland began the construction of a 2.5-meter-tall fence along its 418-kilometer (260-mile) border last week.

The Polish government has taken a hard line in a bid to prevent refugees and migrants from entering the country and beginning asylum claim processes.

The situation has, however, split the country with the liberal opposition, non-governmental organizations and the Catholic Church all criticizing the government's stance.

Poles have also been divided about the fate of a particular group of 30 migrants, suspected to have come from Afghanistan, who have been stranded at the border for over three weeks.

Polish authorities arrested 13 activists over the weekend who had been protesting what they called "inhuman" behavior on the part of the government by cutting a hole in the new fence.