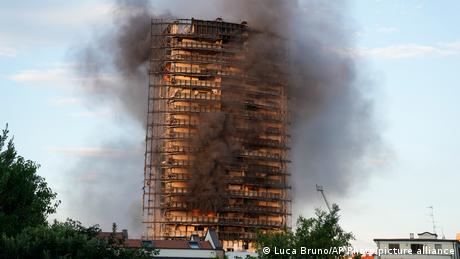 Italian firefighters were still struggling to bring a raging fire under control at a high-rise building in Milan on Monday, a day after it first went up in flames.

There were no reports of deaths or missing people inside the high-rise residential building, with firefighters saying everybody appeared to have been brought to safety. However, the rapid spread of the fire and the destruction of the cladding on the outside of the building recalled the fire at Grenfell Tower in London in 2017 that killed 71 people.

"I have never seen a situation like this,'' firefighter official Giuliano Santagata told AP. ''Just look at the facade and you see that everything is completely burned, and therefore presume that it was made of flammable material."

Videos of the fire were shared over social media.

Milan's mayor, Giuseppe Sala, demanded answers for why the fire was able to rip through the building so easily. "The tower was built just over 10 years ago and it is unacceptable that such a modern building should have proved totally vulnerable," he wrote on Facebook.

"What was clear from the start was that the building's outer shell went up in flames far too quickly, in a manner reminiscent of the Grenfell Tower fire in London a few years ago," he added.

The fire was first reported by a resident on the 15th floor and then quickly spread through the cladding, despite the material supposedly being fire resistant, Italian newspaper Corriere della Sera reported.

"The cause of the fires still needs to be determined, but it seems that the rapid spread of the flames was due to the thermal covering of the building," said Carlo Sibia, an Interior Ministry official in Rome.

Firefighters were able to extinguish the main blaze in the 60-meter (almost 200-foot) building but were left battling remaining hotspots on Monday.

A tweet from the Italian fire service included video taken from a helicopter showing the extent of the damage and the remaining plumes of smoke. The tweet said that 15 vehicles had been deployed and that firefighters were checking the inside of the building for people who had been left inside.

Flammable cladding and poor safety standards were blamed for the Grenfell Tower fire. The tragedy resulted in an inquiry into the use of materials in high-rise buildings.