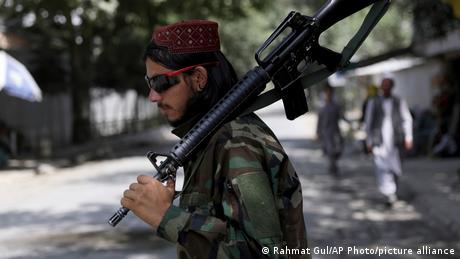 After the Taliban ousted the Afghan government earlier this month, a spokesman for the militant group made a series of public pledges amid heightened scrutiny — and skepticism. The tone may have been conciliatory, but the West and international organizations, including the UN,eyed the statements warily. One such pledge outlined in the Taliban's August 17 statement was that there would be "no threats" against journalists.

Ten days on, however, Taliban fighters continue to target journalists and their families.

What did the Taliban say?

Taliban spokesman Zabihullah Mujahid had said (via Al Jazeera translation): "Journalists working for state or privately owned media are not criminals and none of them will be prosecuted.

"There will be no threat against them. If journalists have stayed at home in some places, it is because of the war situation. They will soon be able to work as before," he added.

"Once again, I would like to assure the media, we are committed to media within our cultural frameworks. Private media can continue to be free and independent, they can continue their activities — with some requests for the media."

The comments were met with immediate skepticism as, up to this point, journalists were frequently killed, detained or injured by Taliban militants. Less than two weeks before Mujahid's press conference, suspected Taliban fighters killed Afghan journalist Toofan Omar.

Journalists from Afghanistan, including DW staff, have described the Taliban's hunt for them and how their families were targeted as well.

The Taliban shot dead a close relative of a DW editor and seriously injured another while carrying out a door-to-door search for the journalist. The editor was already in Germany when the Taliban gained control of Kabul.

"The killing of a close relative of one of our editors by the Taliban yesterday is inconceivably tragic, and testifies to the acute danger in which all our employees and their families in Afghanistan find themselves," DW Director General Peter Limbourg said after the slaying. "It is evident that the Taliban are already carrying out organized searches for journalists, both in Kabul and in the provinces."

Since the Taliban's unprecedented statement less than two weeks ago, Reporters Without Borders (RSF) told DW it has recorded seven incidents of Afghan reporters and photographers being beaten at the hands of the Taliban, including two serious cases involving female journalist Nahid Bashardost and TOLOnews reporter Ziar Khan Yaad.

Yaad said he and his cameraman were assaulted at gunpoint on Wednesday. The two were reporting on poverty in Kabul when the beating occurred, said Yaad, adding that their equipment — including mobile phones and cameras — were confiscated.

Yaad told DW on Friday that his equipment and phone have not yet been returned and that no arrests have been made. He said the Taliban continue to answer his phone when friends and family try to reach him on the mobile number, and that the militants ask for the reporter's home address is. Yaad said he is also concerned for his family's safety.

There were also 12 cases of journalists being arrested by the Taliban — all of whom were released in the hours that followed.

"Fortunately, no one has been killed as far as we know since the Taliban took over the control of Kabul," an RSF spokesperson told DW.

Media organizations and activists are urging the new regime to clarify what "free and independent" means for private media and how it will be applied within, as the Taliban spokesperson had specified, the extremist group's "cultural frameworks."

The Taliban say they will govern according to Sharia law, or Islamic law. While the group has remained vague on its exact interpretation today, the Taliban's brutal history of applying what it called Sharia law in the 1990s fostered draconian punishments and nearly no rights for women — prompting fears of what may come.

Reporters Without Borders told DW: "We are asking the Taliban to provide clear and written rules for the press to avoid arbitrary situations, as we have noticed these last days."

Earlier this week, RSF Secretary-General Christophe Deloire said in a statement, "Officially, the new Afghan authorities have not issued any regulations, but the media and reporters are being treated in an arbitrary manner.

"Are the Taliban already dropping their masks? We ask them to guarantee conditions for journalism worthy of the name."