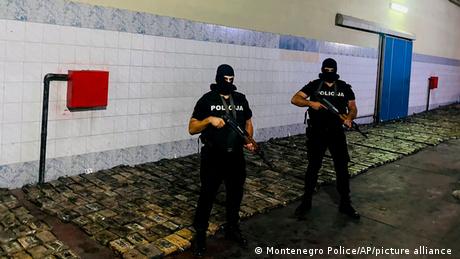 Police in Montenegro said on Friday they had seized over 1 ton (907 kilograms) of cocaine hidden in a shipment of bananas.

The cocaine, which was divided into 1,250 packages, was found on Thursday night in Mojanovici, a suburban village near the capital Podgorica, the national police said in a statement on their Twitter account.

"Montenegrin police and the customs department have seized 1,205 packs of cocaine...in a shipment of bananas... with a total weight of over one ton," it said.

Police said two people were arrested. No other details were immediately available.

It's the biggest ever drug bust in the country, said the RTCG television network.

"What a feat of Montenegrin police. We are doing what we have pledged: Montenegro will not be a country of crime," Deputy Prime Minister Dritan Abazovic said in a tweet.

In recent months, Montenegro has stepped up its fight against organized crime in the country.

Montenegro, a small Adriatic Sea nation with some 620,000 people, is a NATO member and former Yugoslav republic.

It is also seeking European Union membership. But before it joins the bloc, it will have to eradicate organized crime and corruption.