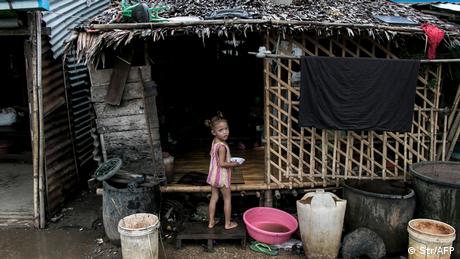 Zaw Min (name changed) is a construction worker in his 30s from the Yangon suburb of Hlaing TharYar in Myanmar. He recounts how he sold his second-hand motorcycle for 150,000 kyat ($91, €77.5) in September out of financial desperation.

Min was forced to find new ways to feed his family when he couldn't find work in his profession amid Myanmar's battle with COVID-19.

"I did not have a job for quite a while. So, I had to sell my motorcycle. I had no choice," Min told DW.

The pandemic, coupled with Myanmar's military coup in February, hit the economy hard.

So, Min began to do any odd jobs that are available to make ends meet. He says that since the coup, it's become even more difficult to find work due to new security measures and worsening political situation.

His regular customers have relocated due to security reasons while others are no longer in contact because of COVID.

"I cannot find work. My customers have moved to other places. Others do not want to hire me anymore," he told DW.

The World Bank has warned that Myanmar is at risk of economic turmoil. In the Myanmar Economic Monitor released on July 26, the global financial institution stated that the country's economy is expected to contract around 18% in the 2021 fiscal year, meaning Myanmar's economy will be about 30% smaller than it would have been in the absence of COVID and the coup.

A survey on business firms in Myanmar released by the World Bank at the end of August found that the impact of the military coup was more detrimental than that of COVID-19.

The military general cited various economic losses due to COVID and warned that Myanmar might continue to face income losses in the coming months.

On August 10, military chief Senior General Min Aung Hlaing had warned about trade and budget deficits in a governmental meeting, according to state media reports.

Businessman Aung Myaing (name changed) says Myanmar must now buy essential items such as edible oil and gasoline "from outside."

"We cannot export much these days. That is why the dollar is in high demand and becoming sky high," he told DW, warning about the weakening Myanmar kyat currency and burgeoning trade deficit. The kyat has dropped approximately 30% in value since the coup.

"It's very difficult to run a business these days," he added.

"The exchange rate is changing everyday and raw material prices change with it…Our customers are facing economic difficulties. So, we don't know how to price our products," he said, adding that cash shortage is also a problem.

Since the military takeover, the Southeast Asian country has been crippled by a cash shortage. Banks have placed caps on ATM cash withdrawals and introduced token systems to restrict the number of customers making counter transactions.

The central bank restricted the withdrawal of Myanmar kyat to 20 million for companies and two million kyat for individuals. More amounts of cash can be withdrawn for buying COVID-related medicines and medical equipment.

Since the coup, people have been seen queuing outside bank branches. People are desperately trying to find cash through various means.

"I have no idea how we can get out of this mess," lamented factory owner Khin Maung Naing about the economic crisis.