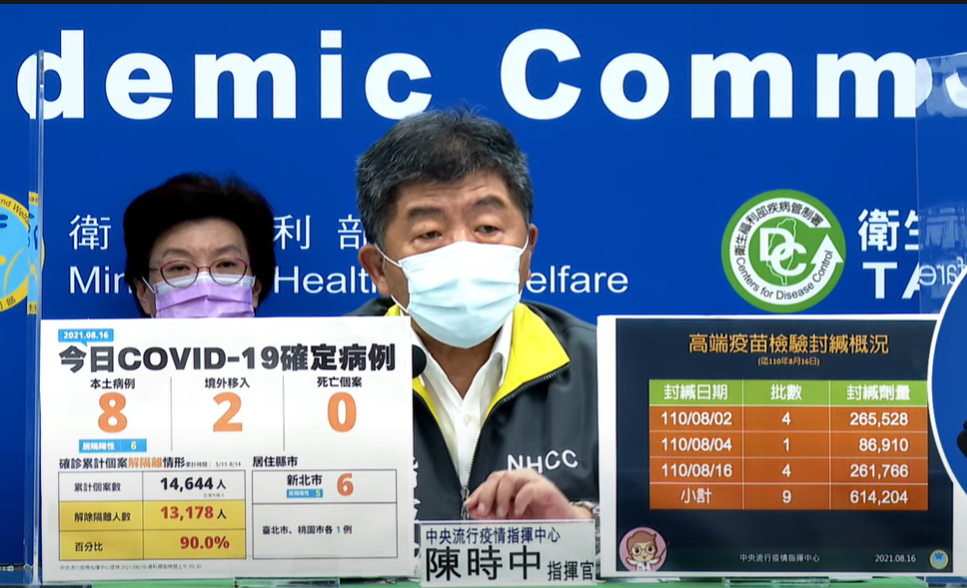 The country has had its borders closed to non-nationals, except for those with residency or special permission to enter, since March 19, 2020.

Quarantine rules were tightened in June of this year, requiring all arrivals to undergo a two-week quarantine either at a government facility or a quarantine hotel in order to prevent the spread of the Delta variant of the virus in Taiwan.

Previously, arrivals from countries deemed to be low-risk could stay at their residence in Taiwan for the compulsory two-week period.

Asked whether Taiwan will relax some restrictions after new locally transmitted COVID-19 cases reached zero on Wednesday, Chen said now is not the time.

"Of course we wish to relax some of these quarantine rules, but the point is we in Taiwan must have stronger protection first," he said, adding that only when the national vaccination rate is higher will the CECC consider easing some of the entry regulations.

However, Chen did not specify how high the vaccination rate would have to be for quarantine rules to be relaxed.

Currently, around 40% of Taiwan's population of 23.5 million has received their first shot, but less than 3% has had the two shots needed to be fully vaccinated.

Experts say Taiwan will need to vaccinate at least 60% of the population to achieve herd immunity and safely reopen to the outside world.

The CECC said it expects to lower the classifications for Taipei and New Taipei later this week from the existing high-to-moderate infection risk to a moderate risk.

The cities have reported more than 90% of the country's COVID infections since a surge in cases started in mid-May.

As the domestic outbreak has been brought more or less under control over the past few weeks, the CECC is expected to lower the risk classification for Taipei and New Taipei and allow family members of long-term care center residents in the cities to visit their relatives starting Tuesday (Aug. 31). They have not been permitted to do so since May.

Meanwhile, Taipei announced that exercise equipment in parks that has been sealed off since May will reopen starting Thursday, but those using it must wear a mask and maintain social distancing. In addition, basketball, volleyball, and handball facilities will reopen on Wednesday (Sept. 1), the city government said.

Kaohsiung has said it will open local activity centers for some courses, as well as outdoor hot springs and spa pools on Wednesday (Sept. 1), though people visiting these sites still need to wear a mask at all times.