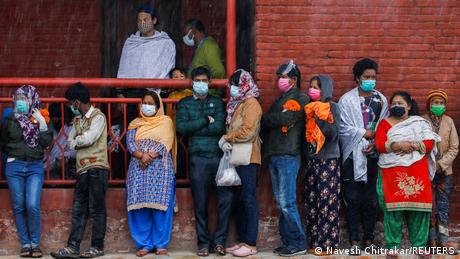 As COVID cases continue to rise, Nepal's Ministry of Health and Population (MoHP) has warned of a third coronavirus wave, instructing all hospitals and health centers to gear up and prepare necessary measures.

"We are at the brink of a third wave as daily cases have increased, hospital beds are being filled up with serious patients, and many cities and towns have declared lockdown measures," Baburam Marasini, a former director of epidemiology and disease control, told DW.

Nepal reported a total of 751,001 COVID cases as of Wednesday with 10,568 related deaths, according to data from the Johns Hopkins University. The country logged between 3,000 and 4,000 daily COVID cases in the past several days. The recorded daily new cases were less than half that number in July and earlier this month.

Health experts have said the virus could spread rapidly in the coming weeks, especially during Nepal's festive season in October and November.

Though authorities started COVID-19 vaccinations as early as in January 2021, inoculation has been severely delayed after India stopped exporting vaccines in March after a devastating virus wave hit the country.

As of August 19, only 16% of Nepal's 30 million inhabitants had received their first dose of jabs, while 12% of the population had been fully vaccinated.

"If we fail to gear up vaccination, we will face yet another deadly wave of the pandemic," Marasini cautioned. "There is a sheer absence of testing and contract tracing in villages and rural parts of the country. This has made it further difficult to contain the virus," he said.

Nepal has procured around 10.8 million doses of COVID vaccines so far — most of which were procured or provided as a form of grant assistance from China and India, with about three million doses provided by the US and Japan through the COVAX scheme.

Nepal's Health Secretary Roshan Pokhrel says the government couldn't speed up its inoculation drive due to the non-availability of jabs. He told DW that Nepal has begun to procure six million doses of vaccines from China and four million from the US. An additional nine million jabs under the COVAX initiative are also expected to arrive.

"We are further planning to secure additional 15 million doses of jabs from Sinovax of China and Pfizer of the USA," he said. "We have appealed to all the vaccine producing countries to make vaccines available either as grant assistance or for buying."

Vaccination centers at risk of being hotspots

More than half of Nepal's new COVID cases have been recorded in major cities, including the national capital Kathmandu and provincial capitals like Pokhara and Biratnagar, as well as towns bordering India. Public parks, temples, and movie theaters, among others, have been ordered to shut down until further notice.

Pokhara Metropolitan City authorities in central Nepal have issued a warning to all vaccination centers in the area to abide by health guidelines following reports that vaccination centers could become COVID hotspots for failing to comply with distancing measures.

"We came here to take vaccines. But we are risking our lives while waiting in crowded queues to take the jab," Sanu Maya Maharjan, 57, who was queuing up for the jab at a vaccination camp in Kathmandu, told DW.