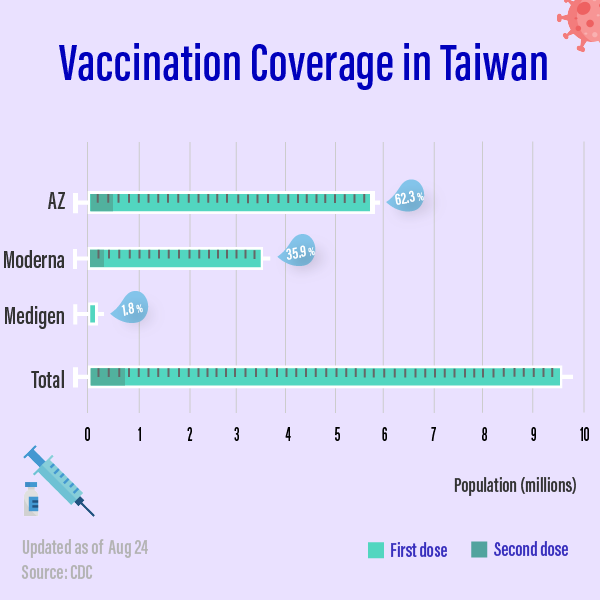 TAIPEI (Taiwan News) — Taiwan's Central Epidemic Command Center (CECC) announced Tuesday (Aug. 24) that over 40% of the population has received at least one dose of a COVID-19 vaccine.

Health Minister and CECC head Chen Shih-chung (陳時中) said Tuesday afternoon that 40.32% of people nationwide had received the first dose of a COVID vaccine. He said that Taiwan's ratio of doses to its population has reached 43.66 doses per 100 people.

As Taiwan's sixth round of vaccinations commenced on Monday (Aug. 23), 179,000 doses were administered, with 167,000 being the domestically developed Medigen jab. Although 187,000 people had registered for the Medigen shots, 20,000 missed their appointments.

Chen says that this indicates that 90% of those registered showed up for their Medigen vaccinations. He described the percentage who received the vaccine as "fairly good, we are fairly satisfied."

Thus far, 599,000 people have registered to be inoculated for the sixth round, with 605,359 qualified. Last week, Chen said that 614,204 doses of the Medigen vaccine have been tested and sealed and are ready for use, meaning that most of the available vaccines will be put to use.