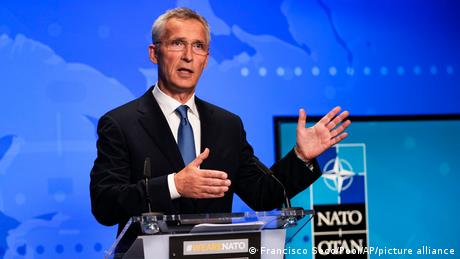 NATO allies will use diplomatic tools and possibly sanctions to ensure that the Taliban "live up to their commitments," the alliance's chief Jens Stoltenberg told DW on Friday.

After the Taliban's takeover of Afghanistan, they pledged "amnesty" to Afghans who had worked with international forces and promised to allow their safe exit from the country.

Western countries have scrambled to get their citizens and local staff out of Afghanistan."The problem is not the lack of planes. Many allies have stated clearly that they're ready to receive Afghans. The challenge is to get them there," Stoltenberg told DW's Teri Schultz in Brussels.

"We expect the Taliban to allow free passage. We have some leverage. We will use that," he said.

"Of course, we have less leverage now in Afghanistan than when we had a military mission. But we will use political tools, diplomatic tools, potential sanctions to do whatever we can to make sure that that people that Taliban live up to their commitments," he added.

For the short term, Stoltenberg said the alliance needs "tactical operational contacts" with the Taliban "and continue to look into how we can help people to get into the airport."

Stoltenberg admitted that the situation is "difficult for NATO." However, he said the allies "need to be honest and be clear-eyed and ask those hard questions about what are the lessons learned" at a later stage.

After a 20-year presence, US and NATO forces began withdrawing from Afghanistan in early May.

The decision to withdraw troops came after the former US administration signed a deal with the Taliban, agreeing to end the conflict in Afghanistan.

Although the US made the deal with the Taliban unilaterally, Stoltenberg said NATO "made that decision very well aware of the risks that was clearly communicated."

"We knew that if we left or ended our military mission, there was a risk of the return of Taliban," he said. "But we also knew that the alternative was also a bad and difficult option, and that was to stay in a mission with more NATO troops, with more violence, more fighting, more casualties... We actually faced a very difficult dilemma."

The US-led intervention began as a hunt for Osama bin Laden and his al-Qaeda network after the September 11, 2001 attacks in the US.

NATO then invoked its mutual defense clause, Article 5, which treats an attack on one member as an attack on all, for the first and only time in its history.

The Alliance's decision to pull out along with US troops was considered highly likely by most security analysts, given that the US was the most significant contributor to the NATO-led operation.