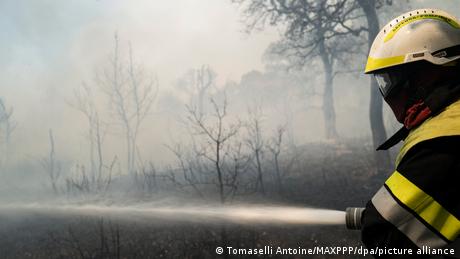 A large forest fire has forced about 6,000 residents and holidaymakers to evacuate homes and accommodations near the French Riviera.

More than 700 firefighters have been trying to tackle the blaze, which began on Monday evening, 40 kilometers (24 miles) from St. Tropez.

"Thousands of people have been evacuated as a precautionary measure, but there are no victims," fire department spokeswoman Delphine Vienco told news agency AFP. No deaths or serious injuries have been reported as yet.

How did the fire start?

The fire is believed to have started on Monday evening, near a stretch of road running through the Plaine des Maures nature reserve north of St. Tropez.

"We've never seen it spread with such speed, it was three or four times the usual," Thomas Dombry, mayor of La-Garde-Freinet village told AFP.

Its currently high season for holidaymakers who flock to the area around this time of the year.

The blaze has been spurred on by strong winds as well as dry and hot conditions, with temperatures reaching 40 degrees Celsius (104 F).

Firefighters are being supported by firefighting aircraft, which are helping dump water on hot spots.

Local authorities have closed roads in the area and have urged caution. According to the local fire department, the area affected is believed to span an area of 22 kilometers (13.6 miles).

A summer of severe wildfires

It's been a particularly devastating fire season for a number of countries in the Mediterranean, with those in Southern Europe and North Africa some of the worst hit.

Most recently, raging wildfires in Algeria claimed the lives of at least 75 people.

Hundreds of fires have burned across Greece and Turkey during a severe heat wave. Italy has also had a number of fires burn this season.

Firefighters in Israel have been battling a wildfire that's been burning for a third consecutive day west of Jerusalem.

The blaze has threatened a number of communities.