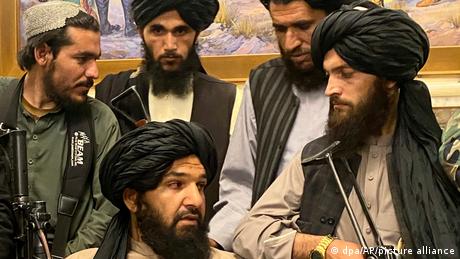 After the Taliban entered the Afghan capital on Sunday, Suhail Shaheen, a spokesperson for the Taliban, said on Twitter that fighters were under strict orders not to harm anyone.

The militant group took over Kabul without facing any resistance from Afghan government forces.

"Life, property and honor of no one shall be harmed but must be protected by the mujahedeen," he said, referring to the Taliban fighters.

Earlier, Mohammad Naeem, another spokesman for the Taliban, told Al Jazeera that the Taliban do not want to live in isolation and want peaceful international relations.

As the Islamist group took control of the capital without bloodshed, commanders said they were ready to form an "inclusive" government with other Afghan stakeholders.

Experts say the Taliban, who ruled Afghanistan from 1996 to 2001, are seeking to project a moderate face. They have even promised that they would respect women's rights and protect both foreigners and Afghans.

But, according to reports from the UN and US, the Taliban committed war crimes during their assault on Afghan forces and executed some of the surrendering soldiers in parts of the country. The militants deny these accusations.

Many Afghans say the Taliban are unlikely to keep their promises. They fear the group will return to past practices with their imposition of Shariah, or Islamic law.

During the Taliban's previous rule, which lasted from 1996 to 2001, they did not allow women to work and enforced harsh punishments such as whipping and hanging.

"I encouraged one of my colleagues to join the police. Taliban fighters killed her in her home," a female police officer in Kunduz province told DW on condition of anonymity.

The Taliban's swift and rapid battlefield advance across Afghanistan forced hundreds of thousand of people to flee to Kabul. Many of these were women, who recounted stories about Taliban atrocities.

Salima, a displaced woman from Takhar province, told DW that the Taliban came to mosques in her area and told everyone that their fighters will marry widows and young girls.

"They said that their fighters will marry two daughters of any family with three daughters," she said. "We got scared and left. Our home was hit and destroyed. We escaped at 2 o'clock in the morning with only one pair of shoes and clothes. We have nothing left."

Some Afghans told DW that, so far, the Taliban were showing restraint.

He said people had access to food and water in Kunduz.

"The airport is not operational. There are no commercial or military flights from the province," he added.

Haidar also said schools were closed in Kunduz. "The Taliban are planning to use them as rehabilitation centers for drug addicts," he said, adding that the militants are not using schools and other government facilities as their military camps.

According to some residents, the Taliban are also not stopping anyone from running their businesses, but some people are still hesitant to open their shops.

The US has come under heavy criticism for leaving Afghanistan, in what many believe was a premature move, and without a proper peace deal between all the Afghan stakeholders.

The Taliban succeeded in capturing several territories after US President Joe Biden announced an unconditional withdrawal of US forces from the country in February.

Experts say that many Afghans feel abandoned and betrayed by the US, which had vowed to protect human rights in their country.

"We had urged the Afghan government and the international community for months to secure our city, but no one paid attention to our pleas," Halima Sadaf Karimi, a lawmaker from the northern Jawzjan province, told DW.