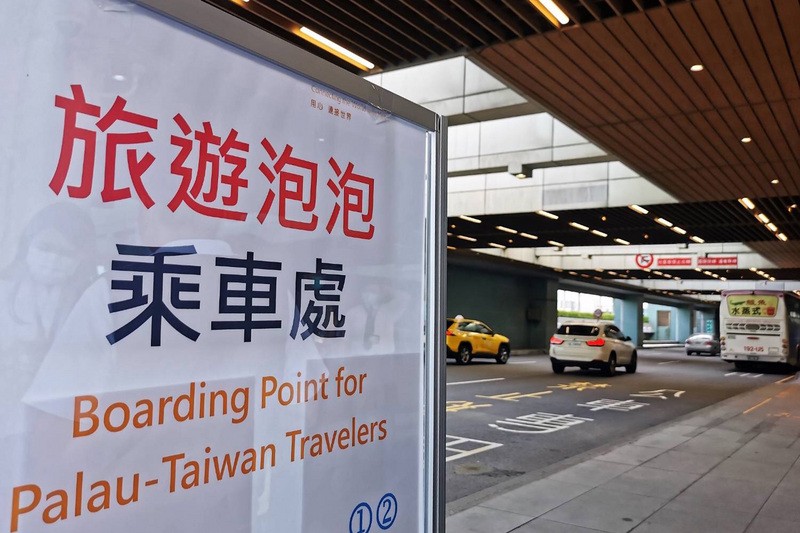 A China Airlines flight took off at around 10:30 a.m., carrying the passengers to Palau under a program in which the Palauan government is offering up to 2,000 doses of COVID-19 vaccines to attract Taiwanese travelers, according to a CNA report.

The travel bubble was initially launched on April 1 but was suspended in mid-May after a surge of COVID-19 cases in Taiwan, partly due to a low vaccination rate. Taiwan is still facing a shortage of vaccines.

The travelers arrived at around 4 a.m. and were then given a COVID polymerase chain reaction (PCR) test at 5 a.m. By 8:30 a.m., their PCR tests had all come back negative, according to Taoyuan International Airport Corp. (TIAC) President Jerry Dan (但昭璧).

Dan said the airport has a streamlined procedure in place, which allowed them to finish the tests ahead of schedule. In accordance with disease prevention protocols, participants in the travel bubble will be isolated from other travelers upon their return to Taiwan, he said.

Dilmei L. Olkerii, Palau's ambassador to Taiwan, visited the airport to wish the passengers bon voyage and distributed US$50 (NT$1,391) in travel vouchers to each person for their holiday. Olkerii thanked Taiwan's Central Epidemic Command Center (CECC) for allowing the program to resume.

She said she will meet with representatives from EVA Airways and Tigerair Taiwan next week to discuss future flight schedules to Palau. Earlier this week, the Palau Visitors Authority's (PVA) Taiwan office announced Palau would provide 2,000 doses of vaccines to Taiwanese travelers in view of the countries' "longstanding friendly ties."

Palau — which currently has doses of the Pfizer, Moderna and Johnson & Johnson vaccines — will offer the shots, along with proof of vaccination documents, to the visitors on the day they arrive, per CNA.

Although Palau will administer many travelers' first jab, there are some who have already received one jab in Taiwan and are planning on getting another brand of vaccine there. A woman surnamed Yeh (葉) told CNA that both she and her husband had received an initial shot of AstraZeneca and were planning to receive the Pfizer-BioNTech vaccine in Palau.

Another woman, surnamed Chou (周), said she and her husband had first received doses of the AstraZeneca and Moderna vaccines, respectively, and that they both would get Moderna for their second dose in Palau.

Under the program, travelers returning from Palau will have to follow five days of "enhanced" self-health management, either at a quarantine hotel or at home, depending on the circumstances, according to the CECC. Following this, they will be required to take a PCR test, after which they will be allowed to follow standard self-health management protocols until the 14th day, the CECC said.