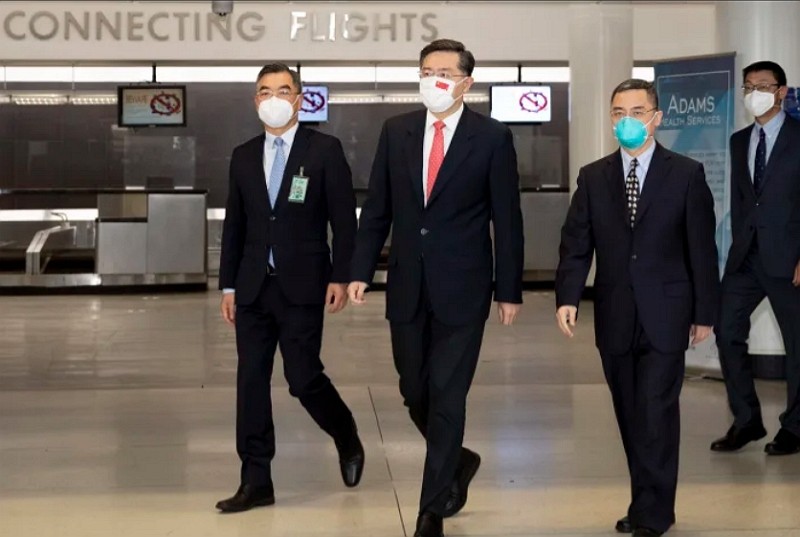 BEIJING, Aug 13 (Reuters) - China's newly appointed ambassador in Washington stressed the utmost importance of Taiwan in the Sino-U.S. relationship during his first meeting with a top U.S. official since assuming the job, according to Chinese state media.

Qin Gang, 55, who has earned a reputation for pointed public defences of his country's positions, struck an optimistic tone as he arrived in Washington in late July to take up his post, saying great potential awaited bilateral relations. read more

Meeting U.S. Deputy Secretary of State Wendy Sherman, Qin said they both had an "in depth, very frank" exchange of views, the official Xinhua news agency reported on Friday.

"The two sides agreed that Sino-U.S. bilateral relations are very important, and it is necessary to resolve issues through dialogue and communication, manage differences and contradictions, and improve bilateral relations," Xinhua said.

The only issue to be directly mentioned in the report was Chinese-claimed Taiwan, the democratically ruled island that China considers its sovereign territory.

"Qin Gang emphasised that the Taiwan issue is the most important and sensitive issue in Sino-U.S. relations. He clearly stated China's position to Sherman," Xinhua added, without elaborating.

China has been incensed by increased U.S. support for Taiwan, including arms sales and COVID-19 vaccine donations, believing Washington is colluding with forces in Taiwan which are seeking the island's formal independence, a red line for Beijing.

The United States, like most countries, does not maintain formal diplomatic ties with Taiwan, but is its strongest international backer and main supplier of arms.

Meeting the newly arrived de facto U.S. ambassador to Taipei, Sandra Oudkirk, on Friday, Taiwan Vice President William Lai expressed thanks for U.S. support and its stressing, along with U.S. allies, of the importance of stability in the Taiwan Strait "in the face of threats from China".

"This is extremely helpful for Taiwan's society, cross-Taiwan Strait developments, and peace in the Indo-Pacific," the presidential office cited Lai as saying.