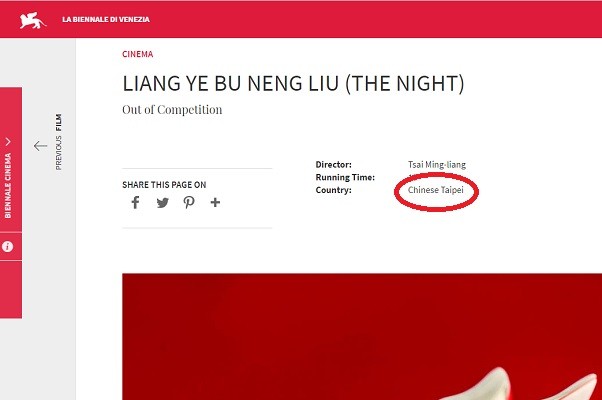 TAIPEI (Taiwan News) — The Ministry of Foreign Affairs (MOFA) is demanding that the Venice Film Festival correct its listing for Taiwanese films after it altered their entries to say they come from "Chinese Taipei."

Director Tsai Ming-Liang's (蔡明亮) documentary "The Night" 良夜不能留 and Chung Mong-hong's (鍾孟宏) drama "The Falls" (瀑布) were originally submitted to the festival under the country name of Taiwan. However, this was suddenly changed to "Chinese Taipei" on the festival's website.

Chinese Taipei is the name Taiwan is required by the International Olympic Committee to participate in the Olympics.

Kendra Chen (陳詠韶), deputy director-general of MOFA's Department of European Affairs said at a virtual press briefing Tuesday (Aug. 10) that according to a report from Taiwan's representative office in Italy, the festival's organizers made the change after China filed a protest over the use of Taiwan. Upon learning of the change, Chen said MOFA had immediately requested that the film festival change the name back, but organizers have yet to send a response.

Chen pledged that the ministry and the Taiwanese representative office will continue trying to communicate with the organizers and negotiate through multiple channels to request a correction to ensure participating films from Taiwan are not "unreasonably suppressed and diminish our sovereignty."

When President Tsai Ing-wen (蔡英文) first took office in 2016, she refused to recognize the so-called "1992 Consensus," acknowledging only that the 1992 Taiwan-China talks were a "historical fact." In response, China has been seeking to punish Taiwan by excluding it from international organizations, luring away diplomatic allies, and intimidating government bodies, corporations, and universities into de-listing it as a country. 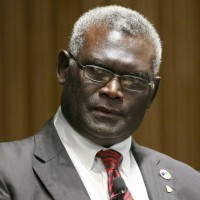