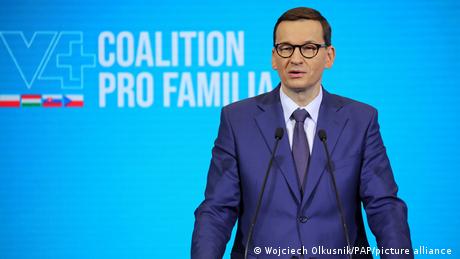 "My dismissal is de facto a rupture of the governing coalition," Gowin told reporters. His Agreement Party has knocked heads with the main coalition party Law and Justice (PiS) in recent months.

The coalition is still intact, but Morawiecki now runs the risk of losing a vote of no confidence in the Polish parliament.

Gowin's party holds 10 seats in parliament and its departure from the coalition would deprive PiS of its majority. Another option is to seek the support of another party even further to the right.

"I am not convinced that we will lose our majority because of this," government spokesman Piotr Muller said.

The reason behind the final split was a disagreement over tax increases and a proposed law that could end up forcing a US company to sell its stake in Poland's main private TV broadcaster, TVN.

The channel TVN24 is considered to be critical of PiS. Thousands of people took to the street on Tuesday to protest the legislation which is believed to be aimed specifically at the US-controlled network. The Polish parliament will vote on the proposal on Wednesday.

Gowin had been concerned about the impact it would have on Poland's relations with the US. The 59-year-old lawmaker heard about his dismissal from the media.

"We said that the United Right would not raise taxes. But the proposed budget law recently presented by Prime Minister Mateusz Morawiecki means a drastic increase in taxes," he said. "We are leaving the government with our heads held high."