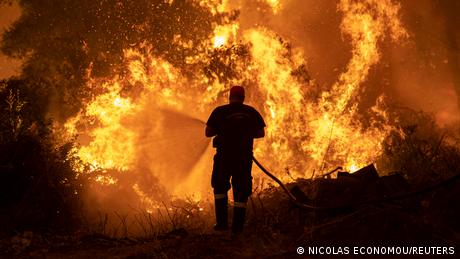 Firefighting aircraft on Tuesday helped beat back wildfires threatening the northern town of Istiaia on the Greek island of Evia.

Istiaia Mayor Yiannis Kontzias told local media that he was "optimistic" that the fire would not reach his town.

Speaking to public television channel ERT, Kontzias said: "We have managed to control this front because we doused it both from the land and air," he said.

"Helicopters helped a lot and if we had done that since the beginning, we would have avoided all this destruction," he added.

Firefighters and residents have been desperately trying to stop the wildfire as it approached the town of several thousand. The fire forced the evacuation of hundreds, while many others opted to stay and help douse the flames.

The Greek have destroyed hundreds of homes and forced thousands to flee greater Athens and other regions.

Prime Minister Kyriakos Mitsotakis earlier apologized to the people of Greece and vowed to bring those responsible for the fires to justice.

In an address Mitsotakis said: "I apologize for any shortcoming ... we may have done what was humanly possible, but in many cases it was not enough."

There are still concerns over three active wildfires in the Peloponnese peninsula. Hundreds of Greek firefighters have been joined by reinforcements from the Czech Republic, Romania, Ukraine, Serbia and Britain among other countries.

Read on for a summary of wildfires currently burning across the world.

Nearly all the fires that have been burning in Turkey for the past two weeks are under control. One fire continues to burn in the south-western province of Mugla. According to officials it has yet to be contained. Over two hundred fires tore through nearly half of the country's provinces, and left eight people dead.

The fires have been particularly devastating in the provinces of Antalya and Mugla, which are very popular holiday destinations. It is estimated a total of 150,000 hectares have been destroyed, and authorities are probing the possible cause of the fires.

A wildfire in Algeria has claimed the lives of seven people according to local officials.

Firefighters are tackling 31 blazes in extremely hot temperatures and dry ground conditions. Many of the fires are raging in the forested hills of the Kabylie region, east of the capital Algiers. Algeria becomes the latest Mediterranean country to be hit by multiple fires. Meteorologists predicted temperatures of 46 degrees Celsius (115 degrees) on Tuesday. The north African country is also struggling with a severe shortage of water

A forest fire is tearing through the Aspromonte National Park in the south of the country. There have repeated appeals for fire-fighting aircraft, but only one is in operation, according to park head Leo Autelitano. The reserve is a UNESCO Global Geopark. Elsewhere in Italy wildfires continue burning amid hot, dry and windy conditions. The civil protection department in Sicily and Sardinia say there is increased fire risk on large areas of the islands.

The largest single fire in Californian history continues burning through dense forest in the north of the state. The enormous blaze has been burning for more than a month and has destroyed hundreds of homes. Around 6,000 firefighters are battling the fire which shows no sign of ending.

"We don't know where this fire is going to end and where it's going to land. It continues to challenge us," said Chris Carlton, supervisor for Plumas National Forest.

There are concerns that weather conditions will continue to fuel the fire with dry and hot temperatures expected over the coming days.

California's Department of Forestry and Fire Protection says the Dixie fire is just 22% contained and has grown to an area of 753 square miles (1,950 square kilometers).

The blaze has scorched an area more than twice the size of New York City.

Russian President Vladimir Putin has ordered the deployment of more reinforcements to tackle fight forest fires roaring through Siberia. Putin also wants more aerial capacity to help firefighters on the ground. According to Russia's emergencies ministry branch in Yakutia, one of the hardest hit areas, there were more than 4,200 people battling the forest fires.

The US space agency NASA said its satellite images showed wildfire smoke from Yakutia travelling to the North Pole, calling it a first in history.