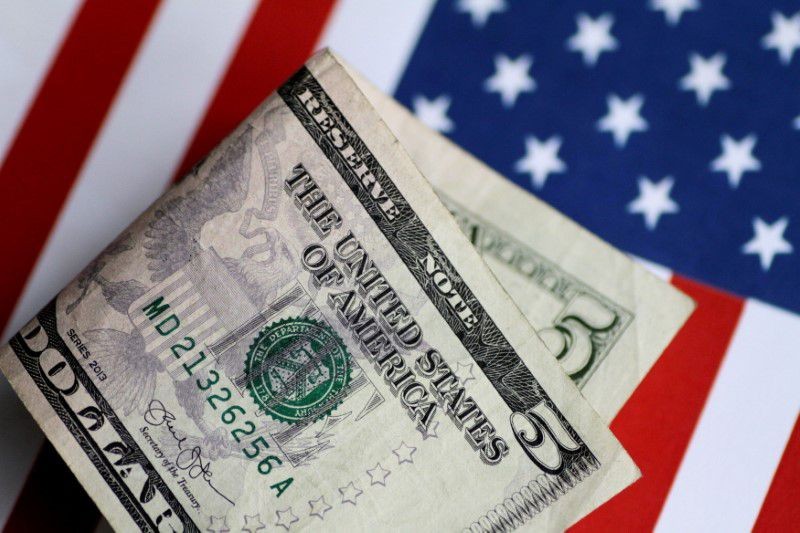 LONDON, Aug 10 (Reuters) - The dollar hit a four-month high versus the euro on Tuesday after upbeat U.S. jobs data bolstered expectations that the Federal Reserve could soon start tapering its massive bond-buying programme.

Analysts said the dollar was getting support from rising U.S. bond yields, as the prospect of reduced Fed stimulus weakened bond prices.

U.S. job openings, a measure of labour demand, hit a record high in June while hiring also increased, the Labor Department said in a monthly survey on Monday.

That followed Friday's non-farm payroll report showing jobs increased by 943,000 in July, above the 870,000 forecast by economists in a Reuters poll.

The dollar index strengthened on Friday and Monday, and reached an 18-day high of 93.02 during Asian trading hours on Tuesday.

The euro hit a four-month low against the dollar, with the pair changing hands at $1.1726 .

The Swiss franc and Japanese yen were both down 0.1% against the dollar, as demand for safe-haven currencies fell , .

Attention now turns to U.S. consumer inflation data due on Wednesday, which could provide more cues on the timing of the Fed's bond-purchase taper.

Although there is talk among analysts of the market being "data-driven", U.S. jobs market and inflation statistics are difficult to interpret, Commerzbank Ulrich Leuchtmann wrote in a client note.

"Even if the macro data from the United States is currently astounding, it says little about where the dollar should trade in the medium term," he said.

"And that's why the FX market is wary of any significant reassessments."

"Market participants will be watching comments from Fed officials even more closely than normal in the near-term for any signs that the Fed could speed up plans for tighter policy," MUFG currency strategist Lee Hardman said in a note to clients.

Elsewhere, risk appetite was harmed by worries about growth in China and the fast-spreading Delta coronavirus variant, which led to oil prices hitting a three-week low in the previous session.

The Australian dollar, which is seen as a proxy for risk appetite, was hurt by lower commodity prices and extended lockdowns in the country.

Hardman said he expected the Reserve Bank of New Zealand (RBNZ) to raise its rate by 0.25 basis points this month.

"We are still recommending a short AUD/NZD position to benefit from widening policy divergence between the RBA (Reserve Bank of Australia) and RBNZ," Hardman wrote.

"The short AUD leg should act as a hedge to offset downside risks to the NZD from global growth concerns."