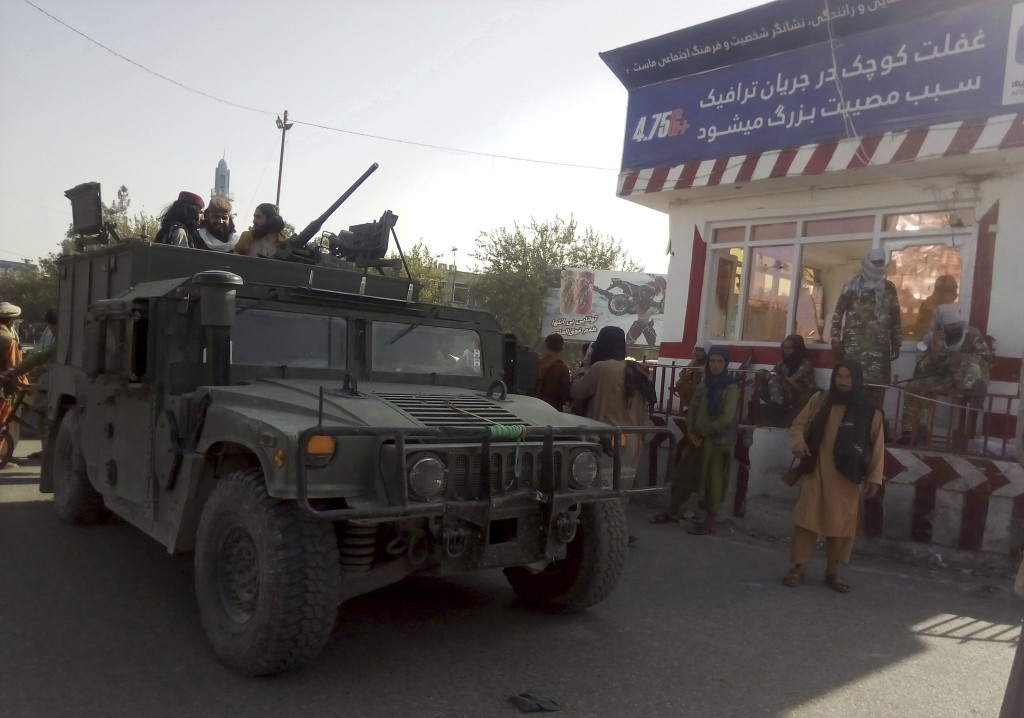 US envoy to warn Taliban not to bet on Afghan takeover

KABUL, Afghanistan (AP) — A U.S. peace envoy was back in the Middle East on Tuesday to warn the Taliban not to pursue a military victory on the ground and deliver a blunt message: A Taliban government that comes to power through force in Afghanistan will not be recognized. The U.S. State Department said Zalmay Khalilzad, the U.S. envoy, was in Doha, Qatar, where the Taliban maintain a political office, to “help formulate a joint international response to the rapidly deteriorating situation in Afghanistan.” The development comes amid a weekslong, relentless Taliban offensive as American and NATO forces finalize their pullout from war-torn Afghanistan.

BEIJING (AP) — A Chinese court on Tuesday rejected a Canadian drug convict’s appeal of a death sentence in what appeared to be an effort to step up pressure on Canada to release a detained executive of tech giant Huawei. The Canadian government condemned the ruling and appealed to China to grant clemency to Robert Schellenberg. His sentence was abruptly increased from a 15-year prison term to death after the Dec. 1, 2018, arrest of Meng Wanzhou on U.S. charges related to possible dealings with Iran. In separate cases, two other Canadians, a former diplomat and an entrepreneur, were arrested on spying charges as China demanded Meng’s release.

DHAKA,Bangladesh (AP) — Bangladesh’s government and aid agencies started vaccinating Rohingya refugees Tuesday as a virus surge raises health risks in the sprawling, cramped camps where more than 1 million people who fled Myanmar are sheltering. The highly transmissible delta variant is driving an infection surge across Bangladesh, with around 20,000 infections and 200 deaths recorded so far in Cox’s Bazar district, the southern region bordering Myanmar where the refugee camps are located. The International Federation of Red Cross and Red Crescent Societies said a national positivity rate of around 30% indicates the spread of COVID-19 is much higher, especially with cramped conditions and the risks faced by many people living in the refugee camps.

The Latest: Teachers in Pakistan told to get vaccinated

In Dubai, Filipina pulls no punches in jokes on Mideast life

DUBAI, United Arab Emirates (AP) — Peering out into the darkened audience of a Dubai bar, comedian Imah Dumagay leaned into the microphone and addressed the mistaken perception that many people have across the Middle East when they see a Filipina at a nightclub. “I am from the Philippines but I am not taking any orders tonight,” she said, drawing chuckles as her countrymen served beers and bar food at this rooftop bar in sight of Dubai’s sail-shaped Burj Al-Arab luxury hotel. “Where is that guy asking for water earlier? Sir, we are not all waitresses.” She waited a beat and added: “But if you’re looking for a maid, I’m available on Saturdays.

SEOUL, South Korea (AP) — The powerful sister of North Korean leader Kim Jong Un ripped South Korea for proceeding with military exercises with the United States she claimed are an invasion rehearsal and warned Tuesday that the North will work faster to strengthen its preemptive strike capabilities. Kim Yo Jong’s statement came after South Korean media reported the allied militaries will begin four days of preliminary training on Tuesday before holding computer-simulated drills on Aug. 16-26. Kim said she was delegated authority to release the statement, implying the message came directly from her brother. She described the South’s decision to hold joint exercises despite earlier warnings by the North as “perfidious behavior” that will push the allies into facing a “more serious security threat.” She said continuing the drills exposed the hypocrisy of the Biden administration’s offers to resume dialogue over the North’s nuclear weapons program.

NEW DELHI (AP) — Olympic gold medalist Neeraj Chopra was given a rousing welcome as he arrived home in India on Monday after winning the men’s javelin event in Tokyo and securing the country’s first-ever athletics gold. In a cricket-mad country, Chopra’s Olympic win was seen as a triumph for the nation of nearly 1.4 billion people, catapulting the 23-year-old to stardom. Hundreds of people gathered at New Delhi’s Indira Gandhi International Airport to greet Chopra, who gave the V-for-victory sign as he looked over the crowd. Chopra and other members of the Indian Olympic team received flower garlands as they left the airport.

Contractors who powered US war in Afghanistan stuck in Dubai

DUBAI, United Arab Emirates (AP) — Some of the foreign contractors who powered the logistics of America’s “forever war” in Afghanistan now find themselves stranded on an unending layover in Dubai without a way to get home. After nearly two decades, the rapid U.S. withdrawal from Afghanistan has upended the lives of thousands of private security contractors from some of the world’s poorest countries — not the hired guns but the hired hands who serviced the American war effort. For years, they toiled in the shadows as cleaners, cooks, construction workers, servers and technicians on sprawling American bases. In the rushed evacuation, scores of these foreign workers trying to get home to the Philippines and other countries that restricted international travel because of the pandemic have become stuck in limbo at hotels across Dubai.

US signals no change in airstrikes as Afghan Taliban advance

The United States showed no sign Monday of stepping up airstrikes in Afghanistan despite accelerating Taliban gains there. A Pentagon spokesman emphasized that Americans now see the fight as one for Afghan political and military leaders to win or lose. “When we look back, it’s going to come down to leadership and what leadership was demonstrated, or not,” by Afghans, Pentagon spokesman John Kirby said at a news conference. “It’s their country to defend now. It’s their struggle.” The comments distancing the U.S. further from the conflict came as Taliban militants captured two more provincial capitals Monday in a push across much of Afghanistan, after taking large swaths of land in the mostly rural countryside.

ANYANG, South Korea (AP) — On the first day of each month, Kwak Geum-ja makes a pilgrimage to a Korean War memorial in her neighborhood to pray for her father, a South Korean soldier who died in battle when she was just a baby. His remains have yet to be recovered, and the aging Kwak is eager for them to be found and interred at the national cemetery. “I’m over 70 now. I won’t have any regrets in my life if I recover my father’s remains before I die,” a teary-eyed Kwak said during an interview in the city of Anyang, just south of the capital, Seoul.