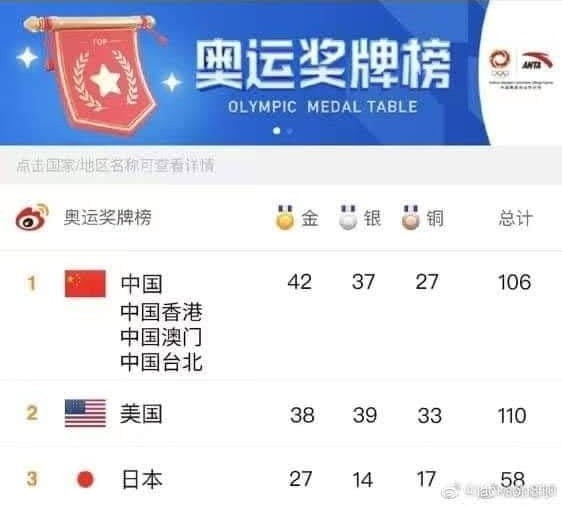 TAIPEI (Taiwan News) — Still stinging from the U.S.' gold medal supremacy at the Tokyo Olympics, bitter Chinese netizens have created an augmented version of "China" by including Taiwan to boost it to the top spot.

On Saturday evening (Aug. 7), China was ahead of the U.S. in gold medals on the last day of competition, with a count of 38 to 36. However, many American media outlets, such as The Washington Post and The New York Times, listed the U.S. at the top of their Olympic rankings because it had the most medals overall.

China's state-run CCTV was dissatisfied with this methodology and criticized American media that day for "ranking the U.S. first based on 'American standards.'" However, on Sunday (Aug. 8) China failed to win any more golds, falling short in rhythmic gymnastics and women's middleweight boxing, while the U.S. dominated Japan in women's basketball and took the gold for the first time in women's volleyball and track cycling.

By the closing ceremonies, the Chinese state-operated broadcaster no longer had a leg to stand on because the U.S. had not only reached the top of the gold medal tally, with 39 golds to China's 38, but also beat its communist counterpart by every other measure, including 41 silvers to 32, 33 bronzes to 18, and 113 total medals to 88.

In response, some Chinese netizens created their own fantasy medal table that lumped in Taiwan, Hong Kong, and Macau to give the enlarged "China" 42 golds, 37 silvers, and 27 bronzes for a total count of 110 and posted it to the Weibo social media platform. In the post, they wrote, "Congratulations to the Chinese delegation for ranking first in gold medals and the total number of points."

Even with the combined version, the new "China" still fell short in every category except gold.

Below the post, netizens, including some Chinese, opposed the contrived table:

"Delete it, don't hack China. Each representative team should be listed with its own medals."

"Go and have the Chinese General Administration of Sport add it for you."

"Taiwan was forcibly recovered by the landlord."

"What song was played when Taiwan won?"

"So why was Little S [Dee Hsu] scolded for saying 'national competitors?'" 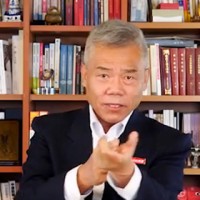 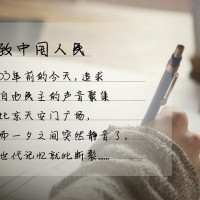