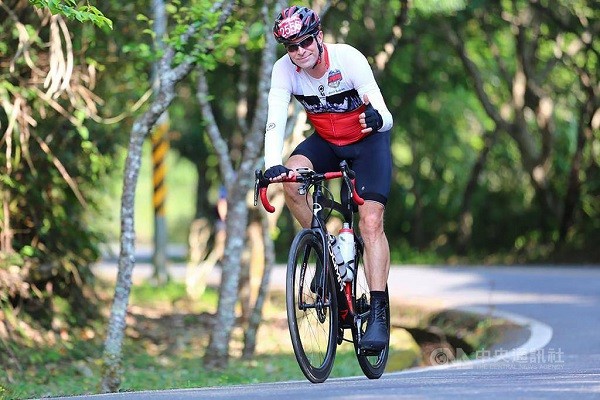 The favorite mode of transportation to and from work for Meidinger, who hails from Germany, is cycling, not riding in a luxury car driven by a driver, CNA reported. When he rides a bike to work, he rides from his home in Taipei’s Tianmu, Shilin District to the Westin Tashee Resort in Daxi District, Taoyuan.

Although he has to get up earlier and it takes longer than riding in a car, cycling is a pleasure for him.

When employees are arriving at the hotel to park their cars, they often see Meidinger as he whizzes by on his bike with a greeting.

When biking to work, Meidinger is always fully outfitted with a helmet and cycling clothes. Currently, he commutes by bike twice a week, though he hopes to do it more.

Meidinger said that when cycling, pressure is released and ideas for solving workplace problems pop up naturally.

Sometimes, he rides along the Xindian River and then turns onto the bikeway along the Dahan River before connecting to Provincial Highway 3. The route is about 42 kilometers.

Other times, he rides along the Xindian River and then onto New Taipei Route 110, a winding mountainous road, with the total distance being about 65 kilometers.

Meidinger, who used to play many other sports, arrived in Taiwan in 2006, staying four years and then returning in 2017. He is a participant in many cycling events in the nation.

The German has four bicycles, and he described them as "like four girlfriends," saying that he cherishes each of them and treats them equally by riding them alternately. So far this year he has ridden over 5,000 kilometers, per CNA.