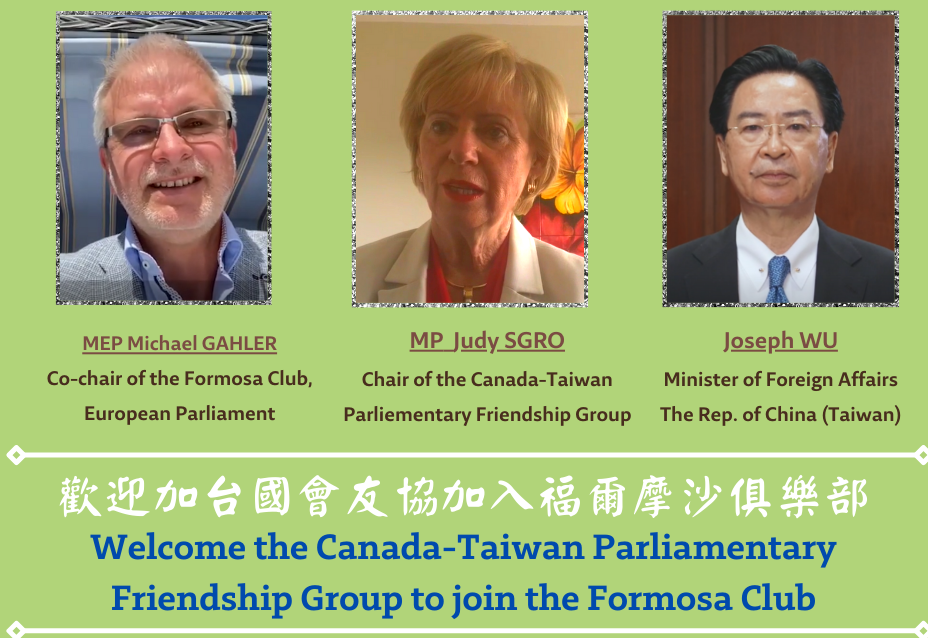 TAIPEI (Taiwan News) — The Taiwan government on Thursday (Aug. 5) welcomed the inclusion of the Canada-Taiwan Parliamentary Friendship Group in the Formosa Club.

The group, led by MP Judy Sgro, has 89 members from both the Canadian Senate and House of Commons and has provided “staunch support for Taiwan’s democracy, security, and international participation,” according to a press release from Taiwan’s EU and Belgium representative office. “The group’s membership in the Formosa Club signifies the transatlantic parliamentary cooperation to uphold Taiwan democracy,” the press release said.

The representative office added that “it is a great delight to see growing international support for Taiwan.”

European Parliament-Taiwan Friendship Group Chair Michael Gahler posted a video on Twitter to welcome the group, saying, “In challenging times, it is good to witness that elected parliamentarians from democratic countries join forces and give support to those whose democracy is threatened by an increasingly assertive one-party state in its neighborhood.”

Gahler added that he is grateful that pro-Taiwan parliament groups across Europe are able to welcome the club’s first transatlantic member. Meanwhile, Sgro shared a video saying she “looks forward to being able to advance many of the issues of mutual interest not only between Canada and Taiwan but also with many other members of the Formosa club.”

Meanwhile, Taiwan Foreign Minister Joseph Wu (吳釗燮) said in a video message that he is “thrilled to see such a strong transatlantic partnership in support of Taiwan.” He said the European branch of the Formosa Club was established in October 2019 by pro-Taiwan parliamentary groups in the EU, Germany, France, and the UK. Since then, it has expanded to more than 130 members and “has generated a lot of momentum for Taiwan’s international participation,” he said.

Wu said the success of the European Formosa Club has inspired the establishment of regional chapters in Africa, West Asia, Latin America, the Caribbean, and the Indo-Pacific. He added that he is glad to see allies strongly voicing support for Taiwan and that the East Asian nation will “continue to work closely with like-minded partners on both sides of the Atlantic to further promote universal values of human rights, democracy, and rule of law.”