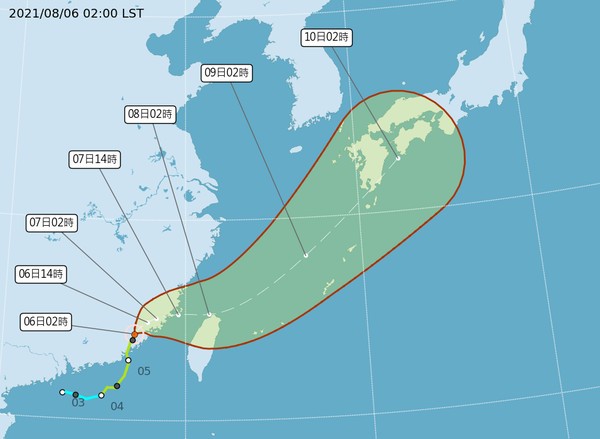 TAIPEI (Taiwan News) — Tropical Storm Lupit's (盧碧) projected course has altered overnight with the Central Weather Bureau (CWB) saying the possibility that it will ricochet and impact the nation on Taiwanese Father's Day (Aug. 8) has increased, and that regardless of its path, the storm's periphery will bring unstable weather over the next three days.

As of 10 a.m., the center of Lupit is located over Longhai City in China's Fujian Province, 384 kilometers southwest of Taipei City, and is moving northeast at a speed of seven kilometers per hour (kph). It is packing maximum sustained winds of 54 kph and gusts of up to 82 kph.

The storm has been weakened due to the effects of the topography of Fujian Province and at 10 a.m. the CWB downgraded the storm to a tropical depression. However, it appears to be heading back out to sea, and CWB forecaster Chen Yi-hsiu (陳伊秀) said that when it hits open water again, it will likely intensify back into a tropical storm.

Chen said that if the storm indeed intensifies and continues on its present course towards Taiwan, the CWB will issue both sea and land warnings. The current CWB model shows the eyewall of Lupit striking the north coast of Taiwan on Aug. 8. CWB forecaster Lin Ding-yi (林定宜) said that Lupit will start to lurch back into the Taiwan Strait today and Saturday (Aug. 7). Regardless of its course, Lin predicts the storm's periphery will affect Taiwan and combine with southwesterly winds to bring precipitation across the country from today through Sunday.

Over the weekend, the CWB advises the public to beware of strong winds, large waves, and heavy rain. Due to the continuous heavy precipitation in western Taiwan seen over the past few days, landslides, rockfalls, and debris flows are possible in mountainous areas, while low-lying areas are prone to flooding.