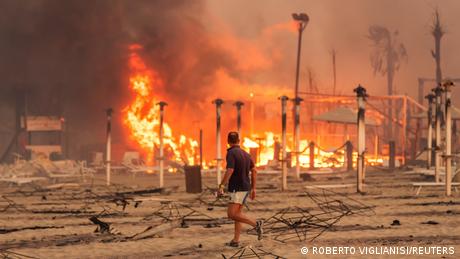 Southern Europe is currently experiencing one of the worst heat waves in recent decades, with Italy, Greece, Spain and Turkey all battling wildfires.

Fires have been raging throughout Italy for weeks. Several central and southern regions have lost tens of thousands of hectares of forest. In Sardinia, botanists are alarmed at the decimation of the local biodiversity and the number of secular olive groves that have been destroyed. In Sicily, wildfires reached Catania, where about 150 people were evacuated by sea, and the airport was closed for several hours.

Since June 15, firefighters have been called out more than 37,000 times — including 1,500 times on Sunday alone. The reason why Italy is struggling to cope with the problem is a combination of political responsibilities, forest protection bureaucracy and alleged criminal activity.

According to Coldiretti, the largest farmers association in Italy, at least 60% of the wildfires in Italy were started by arson.

Two arsonists were arrested on August 2 in Troina, a rural town in the Enna province of central Sicily, where numerous wind power plants are being built. This has raised suspicions because such plants take land away from agriculture.

"We must pay close attention to the hypothesis that the wind business wants to weaken local farmers, forcing them to do something else," said Fabio Venezia, mayor of Troina, to the Italian newspaper La Repubblica, suggesting that arson could be a strategy to force farmers to sell their land — but he stopped short of directly blaming the companies.

To prevent such scenarios, a national law dating from the year 2000 prohibits a change in land use in the 15 years after a fire. However, it is up to local authorities to enforce the law properly and the law does allow for some exceptions.

These suspicions are currently being investigated by the Sicilian anti-mafia commission — a body set up by the Sicilian parliament — which is auditing some landowners who have reportedly been approached by intermediaries offering to sell the land to affiliates of the wind sector.

"There is a need to reflect on what is happening," Claudio Fava, president of the commission, told the news website Live Sicilia. "There has been a spasmodic search for land that could be purchased for €30,000 per hectare, while 200 applications for photovoltaic projects have already been submitted to the regional government." Prosecutors in Sicily and other regions have opened investigations into arson incidents, but the existence of a criminal scheme has yet to be proven.

Criminal hypotheses aside, the slow response to the fires has also been a major issue. For years, firefighters have been complaining that they cannot guarantee adequate services due to insufficient funding and a shortage of staff.

A 2016 law merged the National Forestry Corp with the Carabinieri (Italy's military police corps), making fire brigades — which usually operate in urban areas — responsible for most bushfire control duties. Because fire prevention is managed at the regional level, regional governments have to sign periodic cooperation protocols with fire brigades, even though the latter don't always have the means to fight fires in rural areas, which have been badly affected by drought.

According to local authorities, reservoirs in Sicily have about 78 million cubic meters less water than last year, the lowest level this decade. For this reason, in January 2021, the Sicilian government allocated €20 million to farmers to improve water reserve capacities.

According to a 2019 reportby the Italian National Research Center (CNR), 70% of Sicily is at risk of desertification. Across central and southern Italy, this figure ranges from 30% in Sardinia to over 50% in Apulia.

Nevertheless, woodlands in Italy have increased by about 25% in the last 30 years, going from 9 million to 11.4 million hectares and covering 38% of the country. That is the same amount as in Germany, which is about 55,000 square kilometers bigger than Italy.

The demographic decline in rural areas is one reason for forest expansion. Nevertheless, "the forestry sector is still, in part, conditioned by a culture that dates from the nineteenth century, when the country adopted strict legislation for the protection of woodland areas and created a special forest police force," explains Davide Pettenella, a professor at the Department of Land, Environment, Agriculture and Forestry at the University of Padua. "In fact, the most powerful forest policy instruments are still regulatory constraints. There is a need for a paradigm shift: from 'prohibiting to protect' to 'managing to valorize.'"

In 2020, for example, the Council of State — the highest body in the Italian administrative justice system — ruled that local authorities in charge of forest management in Tuscany cannot cut down trees without obtaining authorization to do so from the Superintendent Office of Landscaping. This added layer of bureaucracy has slowed down work.

A fire on August 1 ripped through the Pineta Dannunziana, an urban pine forest in the city of Pescara, forcing 800 people to flee their homes. At least a dozen were injured, including a 5-year-old girl, and tourists were forced to flee the beach as flames edged closer to bathing establishments.

"The Pineta Dannunziana is considered by law to be an 'integral nature reserve' and cannot, therefore, be subjected to forest management, despite the warnings from the agronomists," said Carlo Masci, mayor of Pescara. "The undergrowth burned very quickly."

A missed opportunity for funding

According to environmental associations, Italy should not have missed out on the opportunity offered by NextGenerationEU to at least boost forest protection with some resources. NextGenerationEU is the EU's plan to support the economic recovery of member states hit by the COVID-19 pandemic. Italy has been allocated €235.14 billion from the fund, making it its largest beneficiary.

But the National Recovery and Resilience Plan (PNRR) submitted by the Italian government to access these funds, "does not allocate a single euro to forests," says Marco Bussone, president of the National Union of Municipalities, Communities and Mountain Entities (UNCEM). "There are only €140 million for 'green communities' — eco-sustainable mountain communities — which we obtained after a lot of effort."

In 2018, the Italian government passed an innovative forest management law, which Bussone describes as "one of the best in Europe". However, the law has not been properly implemented because it was not backed up by the necessary resources, which according to UNCEM would be at least €100 million a year.

"It is an absurd situation for a country made of forests like Italy," said Bussone.