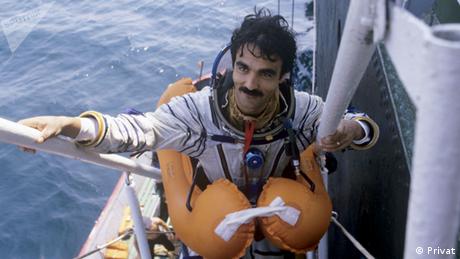 As a child, Abdul Ahad Mohmand says he dreamed of flying, but he never imagined he would one day visit outer space.

He was born in 1959 in Sardeh, a remote village south of Kabul. In 1988, he would become the first and only Afghan cosmonaut on Russia's Mir space station.

Now a German citizen, 62-year-old Mohmand spoke with DW via teleconference from his home in the southern city of Stuttgart where he has lived for almost 30 years.

Mohmand said he first saw footage of space when he entered high school and was able to access television and newspapers. While he was attending the Kabul Polytechnic Institute in 1978, Soviet-aligned Communists took over Afghanistan.

Mohmand was sent to the USSR for military education at the Krasnodar and Kyiv military aviation schools.

Upon his return, Mohammed joined the Afghan Air Force before being accepted to the prestigious Yuri Gagarin Air Force Academy in Moscow.

Three years later, he became one of eight of 400 volunteers selected to participate in Interkosmos, a USSR program that sent men from non-Soviet countries to space.

"I met colleagues from all over, even from countries such as Syria, Mongolia or Vietnam. I have great memories from those times," recalls Mohmand. He ended up being chosen as the Afghan recruit to join a Soyuz crew for a nine-day mission to the Mir space station.

"Despite many years of study and preparation, it is not until you are about to enter the spacecraft that you know that your dream of going to space will finally become true," he said.

At dawn on August 29, 1988, at the Baikonur cosmodrome in Kazakhstan along with the Ukrainian Vladimir Lyakhov and the Russian Valery Polyakov, Mohmand blasted off into orbit.

Mohmand took an Afghan flag and two copies of the Koran with him. The honor of being the "first Muslim in space," however, had already been taken three years before by Sultan bin Salman al Saud, a Saudi who traveled to space with an American crew.

Mohamed Faris, a Syrian, was the second and the third was an Azerbaijani called Musa Manarov who was aboard the Mir when Mohmand arrived.

"From space you see things from a very different perspective. You look at the planet and your mind is flooded with new feelings: you see no countries or borders, you only see the Earth, and the whole of it is your home," explains Mohmand.

While in orbit, he spoke on the phone with Mohammad Najibullah, the then Afghan president.

"Take your neighbor by the hand, lay down your arms. Let's solve our problems through dialogue," was message of the first Afghan in space to the people back home.

But chaos is rife in Afghanistan, as the Afghan resistance movement, backed by the United States, Pakistan and Saudi Arabia, among other countries, is gaining momentum against the Soviet occupation of the country. The Cold War is being fought fiercely 400 kilometers below Mohmand's feet.

A mission into space is never completed until the crew is safe back home, and that doesn't always happen.

Shortly after disengaging from Mir, the three men in the Soyuz capsule discover that the auxiliary engines cannot provide enough power to reach the Earth's atmosphere. It is Mohmand who suggests switching to manual control.

"We lost contact with ground control so we couldn't land. We decided to wait for another 24 hours until they found another place for us. The main problem was oxygen: there wasn't enough for the three of us," recalls the Afghan.

More than three decades later, Mohmand remembers that the men were "exactly two seconds away" from disaster.

"If we hadn't deactivated the autopilot, the engines would have come off on schedule and we wouldn't have never reached the atmosphere," he said.

They landed in the Kazakh steppe shortly before midnight from September 6 to 7, and after almost nine days of flight.

Once in Kabul, a reception began at the airport, from where the cosmonauts would be escorted across the city and greeted by cheering crowds of Afghans. However, an artillery storm over the Afghan capital reminded everyone that a war was still raging.

A new life away from home

Mohmand was appointed deputy minister of civil aviation, but he didn't spend more than six months in the post. In 1992, a civil war between different Mujahideen factions began.

The former cosmonaut had been on a business trip to India and did not return to Afghanistan. His next stop was Germany, where he requested political asylum.

"The country was divided: a province for each warlord, all fighting each other, following the orders from their respective foreign backers who, like today, interfered in the affairs of Afghanistan. They ruined the country and many people died," he said.

On the verge of retirement, Mohmand works as an accountant for a company in Stuttgart, where he lives with his wife and his three children.

From time to time, he is invited to a conference. That, he says, is his only connection with his past life.

He set foot back in Afghanistan again in April 2013, at the invitation of former President Hamid Karzai to celebrate the 25th anniversary of his space adventure. During the reception, he again read the message of peace that he had sent to the Afghan people from space in 1988. It is just as important today as it was then.