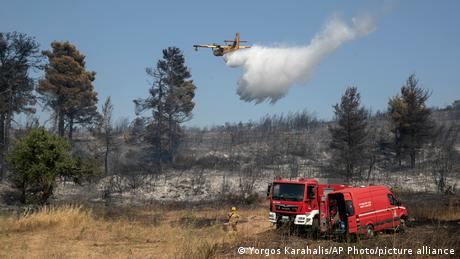 Greek firefighters were battling to contain a large blaze outside the capital, Athens, on Wednesday, after thousands of people were forced to flee their homes.

Greece is facing what has been described as its worst heat wave for more than three decades.

The extreme temperatures have sparked hundreds of fires across the country.

Emergency services faced a race against time to put the blaze out late on Tuesday as flames engulfed residential areas on the outskirts of the city, billowing smoke over its skyline.

They ordered thousands of residents north of Athens to evacuate, with fire crews going door-to-door to ensure the orders were being carried out.

Locals also received a warning by text message from the government as those from the affected neighborhoods left their homes in panic.

"Behind us is hell," one resident shouted from his car to reporters on the scene.

Hotel rooms will be offered for the coming nights to the people who had to flee due to the fire.

Greek Civil Protection chief Nikos Hardalias said the fire was "very dangerous" and was being exacerbated by strong winds and blistering heat.

"There are crucial hours," Hardalias said. "Our country is undergoing one of the worst heat waves of the past 40 years."

"Because the heatwave will continue in coming days, please avoid any activity that could spark a fire,'' he added.

Authorities reported no serious injuries from the Athens wildfires, which are being linked directly to climate change by government officials, as of Wednesday morning.

What will Greek officials do next?

An assessment of the damage caused so far has yet to be completed.

But the national grid operator has already warned that the capital's power supply could be "endangered" after part of the transmission system shut down.

Officials hope that the heavy gusts will tail off later, allowing water-dropping aircraft to resume their operations.

"If the winds don't grow, it can be brought under control by the early morning so the planes can provide the final solution," Regional Governor Giorgos Patoulis told state ERT TV.

The Greek Fire Service has maintained a nearly nationwidewide alert across the country that started on Wednesday. The island of Rhodes close to Turkey is also facing similar fires.

Greece is not the only country to have been hit by deadly wildfires this summer.

Italy, Turkey and Albania have also been affected by a series of blazes sparked by high temperatures.