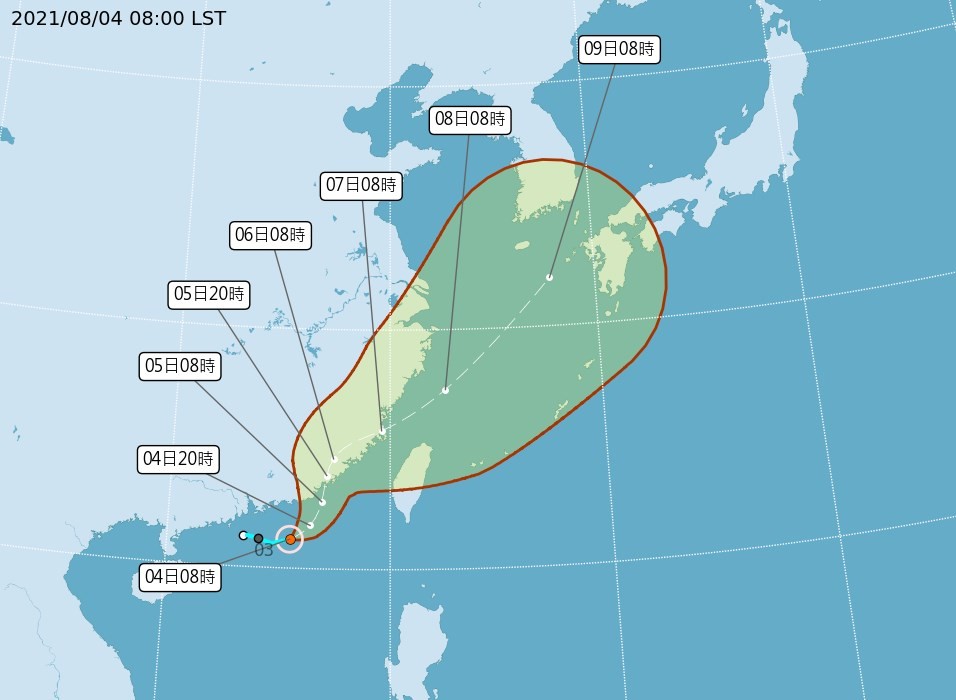 TAIPEI (Taiwan News) — The Central Weather Bureau (CWB) announced today (Aug. 4) that a tropical depression southwest of Taiwan had intensified into a tropical storm and predicted that it will have the greatest effect on the country from Thursday through Saturday (Aug. 5-7).

As of 8 a.m., the CWB reported that Tropical Storm Lupit (盧碧) is 630 kilometers west-southwest of Taiwan's southernmost tip of Eluanbi, moving northeast at a speed of 10 kilometers per hour. It is packing maximum sustained winds of 64 kph and gusts of up to 90 kph. In addition to Lupit, there is a tropical depression to the northeast of the country. The system is predicted to head northeast toward Japan without having an impact on Taiwan.

Although the development of Lupit, which was 570 km southwest of Kinmen, was hindered somewhat by its proximity to China's east coast, the CWB announced this morning that it had developed into a tropical storm. The CWB predicts that the storm will skirt the east coast of China as it moves into the Taiwan Strait and that it will impact Taiwan the most from Thursday to Saturday. Due to its western trajectory, the CWB forecasts that the Taiwanese outer islands of Kinmen, Matsu, and Penghu will be affected most in the form of powerful winds and heavy rains.

As for Taiwan proper, from Thursday through Saturday, central and southern areas will be prone to heavy or torrential rain and sudden downpours. During this period, northern and eastern Taiwan will likely see intermittent rains and potentially heavy rains.