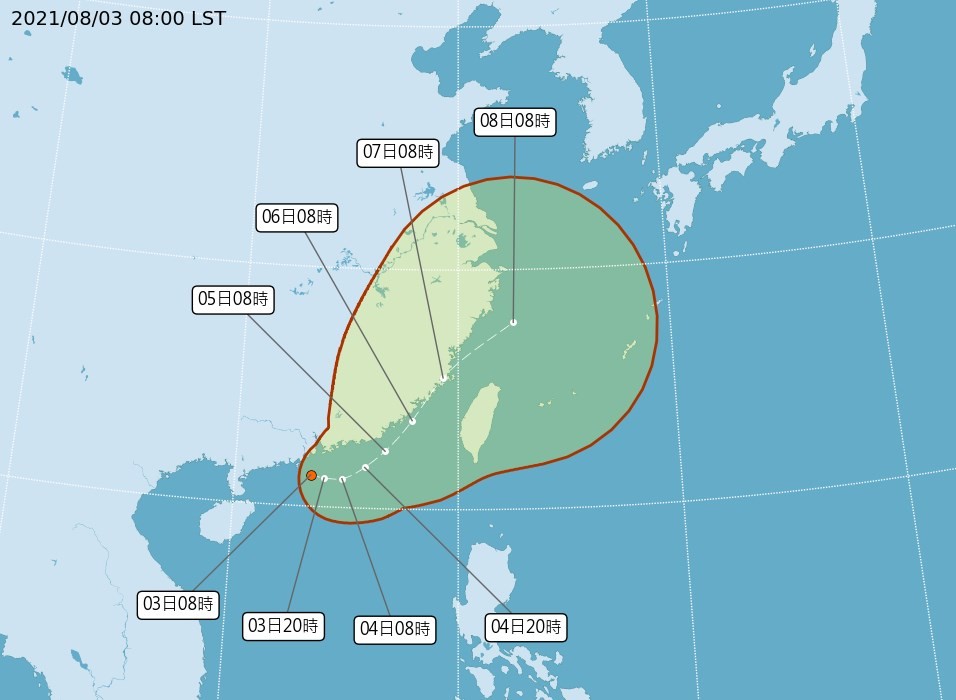 TAIPEI (Taiwan News) — A tropical depression that has formed to the southwest of Taiwan could intensify into a tropical storm as soon as today (Aug. 3) and could begin to affect Taiwan on Thursday (Aug. 5), according to the Central Weather Bureau (CWB).

As of 8 a.m. today, the CWB reported that Tropical Depression 13W was located at 21.3 degrees north latitude and 113.4 degrees east longitude, moving east at a speed of 5 kilometers per hour. The storm had a minimum pressure of 995 hectopascals (hpa) and was packing maximum sustained winds of 54 kph, with gusts of up to 82 kph.

Wu Wan-hua (伍婉華), a senior specialist at the CWB, predicted that the tropical depression would intensify into Tropical Storm Lupit as early as today. Wu said current models show the storm moving northeast from China's Guangdong Province and traveling through the Taiwan Strait from Thursday through Saturday (Aug. 7).

As to which day the tropical cyclone would come closest to Taiwan, Wu said that there are still many variables that could affect its course and further observation is needed for a more accurate assessment. Wu pointed out that the outer islands of Taiwan's Kinmen, Matsu, and Penghu appear to be in the direct line of fire and will likely see powerful winds and heavy rainfall in the coming days.

Wu predicted that as the storm enters the Taiwan Strait on Thursday, central and southern Taiwan will likely see scattered showers, thunderstorms, and possibly heavy downpours. Other parts of the country could see intermittent rain.