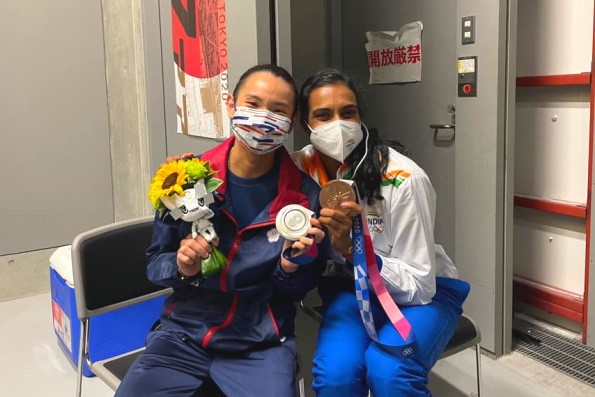 TAIPEI (Taiwan News) — Following her disappointing loss in the gold medal match, Taiwan's "Queen of Badminton" on Monday (Aug. 2) shared a touching moment she had with an Indian fellow player.

In what was arguably the most anticipated Olympic event finals for Taiwanese, world badminton champion Tai Tzu-ying (戴資穎) on Sunday (Aug. 1) lost a ferocious battle for the gold to her Chinese opponent Chen Yufei (陳雨菲) 18-21, 21-19, and 18-21. Nevertheless, the silver is Tai's first Olympic medal and the first badminton medal for a Taiwanese woman.

On her Instagram and Facebook pages on Monday, Tai posted photos showing highs and lows from her last day of competition in Tokyo. Included in the gallery was a snapshot of Tai seated next to her Indian counterpart P.V. Sindhu as the two held up their hard-earned Olympic medals.

Tai wrote that in her third Olympics, she was finally able to make it to the finals, but she lamented that "I was not able to stand on the highest podium." She said that it is hard not to feel some regrets but acknowledged that there will always be imperfections and vowed that the outcome would motivate her to further improve her game.

Alluding to earlier statements about possibly retiring, Tai wrote, "Perhaps I won't have another chance to participate in the Olympics, but I have achieved this goal, albeit not so perfect." She then added: "I just want to tell myself: Tai Tzu-ying, you are great!"

Also in the post, she shared details of an encounter with Sindhu following the medal awards ceremony. "Later, Sindhu ran over to hug me, hold my face, and tell me: 'I know you are upset, you already have performed very well, but today was not your game," wrote Tai.

Tai said that Sindhu then held her in her arms and said that she "knows all about that feeling." Sindhu had also lost a three-set battle to Spain's Carolina Marín in the gold medal match at the Rio de Janeiro 2016 Olympics.

Tai said that Sindhu's sincere encouragement made her burst into tears, "It's really sad because I worked really hard." She closed by thanking her fans for all of their support and encouragement.