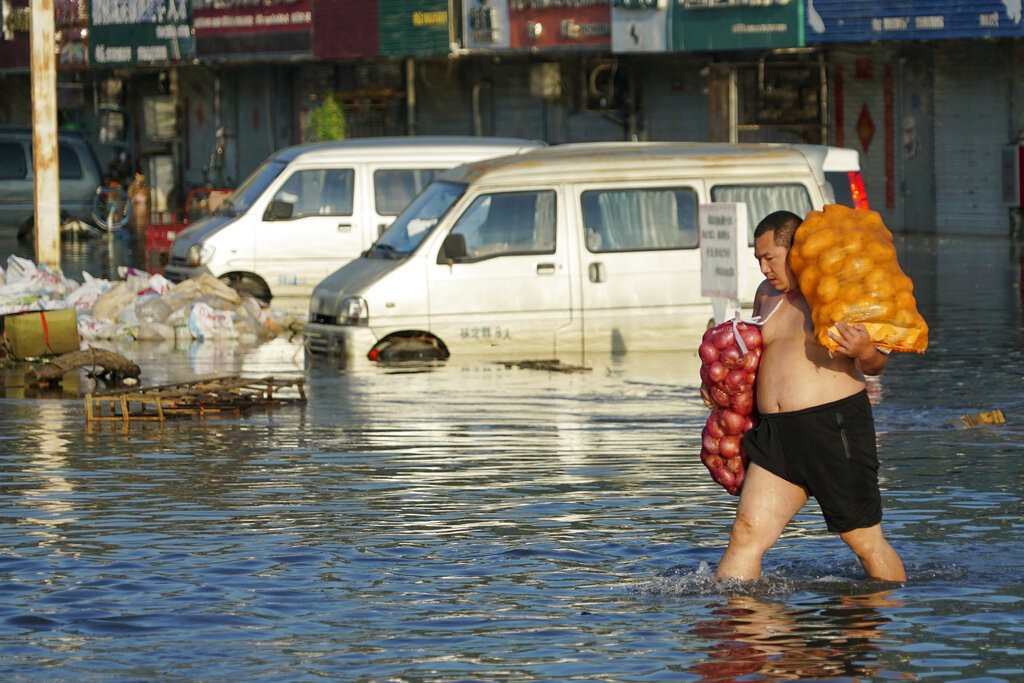 XINXIANG, China (AP) — The night the rains came, all Yu Ruiping could do was huddle in her market stall. The electricity went out. Her phone went dead. And the water just kept rising.

When the skies cleared, the market was surrounded by chest-high water — trapping Yu and her husband for two days with nothing to eat but a few packages of instant noodles.

“It was the most water I’d ever seen,” Yu said, standing in her family warehouse in a neighborhood of Xinxiang, a city of six million people in the heart of central China's Henan province.

The torrent of rain last week burst dams and collapsed bridges, immersing large swaths of Henan in water. In the provincial capital of Zhengzhou, a year’s worth of rain fell in just three days. Authorities announced a sharp rise in the death toll Thursday to 99 people.

After drenching Zhengzhou, where people drowned in subway trains and their cars, the clouds headed north to Xinxiang. On July 21, the heaviest rains pounded the city overnight, turning roads into rivers and carving the city into islands.

Between their spoiled pickled vegetables and their damaged electric wagon, Yu estimates their losses could run into the tens of thousands of dollars, a princely sum in a city where the average annual income is about $8,000.

"If the water at the market had been drained the next day after the rain, our losses would not have been this huge. It’s been a week, and the water has not been pumped out,” said Yu, as she leaned her elbow on cases of pickled mustard greens she and her husband managed to save.

Her husband, Lu Jinlin, recalled his mother recounting a similar downpour in 1963. Though the rains weren’t as bad, their homes made of earth were easily swept away by the waters, he said. There were no rescue teams back then.

This time, the price paid in lives lost was lower because they live now in squat and sturdy concrete homes.

No deaths have been confirmed in Xinxiang so far, but many surrounding villages remain underwater. Recovery work continues. Pumps chug out dirt-colored floodwater, while bulldozers transport people down flooded roads, ferrying them over the waters in the maws of their shovels.

Though rescue efforts have won widespread praise, there are lingering questions about the government’s storm preparedness and why many people were caught off-guard.

One shopkeeper declined to be interviewed with a nervous chuckle. “I don’t dare,” he said.

The waters in the Yubei Agricultural and Aquatic Products World market, where Yu has her stall, are still still knee-deep. Shopkeepers fortunate enough to have stalls elevated above the waters washed them out and wiped down their fridges and tables. Those less fortunate salvaged what they could of their ruined goods.

One vendor wrapped a bundle of cups in a white plastic bag in the back of a half-submerged pickup truck. A young man then hoisted it over to a nearby cart carrying what remains of her merchandise. Cigarette butts and chunks of plastic foam swirled around her legs in murky water that reeked of rotting fish.

She estimated her losses at tens of thousands dollars — the second time she’s facing ruin from a flood, as heavy rains in 2016 also spoiled her goods.

“I’ve had terrible luck, let me tell you,” she said. “All our family fortune is soaked in water.”

She gave only her last name, Xing, after a man standing next to her discouraged her from speaking further to media.

Just down the road, Sun Jiayun, 72, hangs rubber gloves from the branches of trees and fans the soles of shoes on the sweltering asphalt. The pages of once-pristine notebooks curl in the afternoon sun as they dry.

“Nobody will want it,” Sun said of her goods. “Who'd pay for these things?” Still, she’s drying the items out in the hopes that she can give them to friends and family.

Several blocks up the road, Mr. Bao’s Fried Chicken survived nearly unscathed since it's slightly elevated. A cashier there, who would only give her last name, Wang, out of concern for her personal privacy, recalled the panicked days she spent coordinating her niece and nephew’s rescue.

They were home alone, huddling in the darkness as the waters rose, their parents stuck in their store surrounded by neck-high water. An anxious Wang traded messages with rescuers online as she coordinated their lift to safety.

For days, more than a dozen friends and relatives packed into Wang's house, unable to return to their own flooded homes. They slept four or five to a bed — crowded but lively, she said, and an enormous relief after the panic of the floods.

“I can’t describe what it felt like,” she said, tears welling in her eyes. “It’s okay as long as I can see the children, as long as they are alive.”