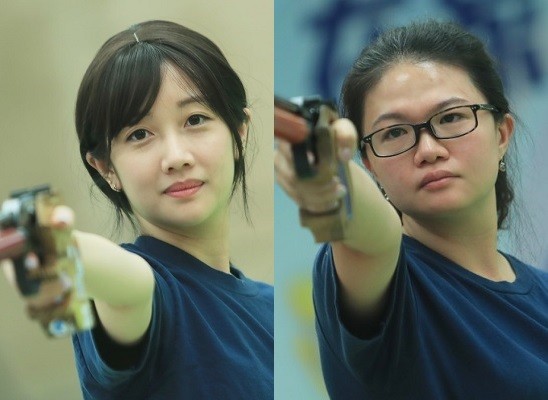 TAIPEI (Taiwan News) — Two Taiwanese athletes have made the finals in the women's 25-meter pistol competition at the Tokyo 2020 Olympics.

On Friday morning (July 30), the second day of competition, Tien Chia-chen (田家榛) and Wu Chia-ying (吳佳穎) placed fifth and seventh, respectively. This gives them a shot at Taiwan's first Olympic shooting medal in the finals, slated for 2 p.m. on Friday.

Although Wu and Tien were unable to make the cut in the women's 10-m pistol competition, they were able to redeem themselves in the 25-m pistol on Friday. In the precision category on Thursday, Wu fired 98 in the first round, 96 in the second round, and 95 in the third round, for a total score of 289, placing her in 14th.

Tien fired a 97, 97, and 99 in the rapid category for a total of 293, with her grand total for the two days also hitting 584. Although four competitors tied with the same cumulative score, because Tien had 24 inner 10s and Wu had 22 inner 10s, they finished 5th and 7th, respectively.

At the London Summer Olympics in 2012, Tien finished 16th in the 25-m pistol, before taking several years off to become a mother. She is the second Taiwanese athlete in history to compete after having children, with the first being weightlifting silver medalist Li Feng-ying (黎鋒英). At the Rio de Janeiro Summer Olympics in 2016, Wu placed 27th in the 25-meter pistol event.