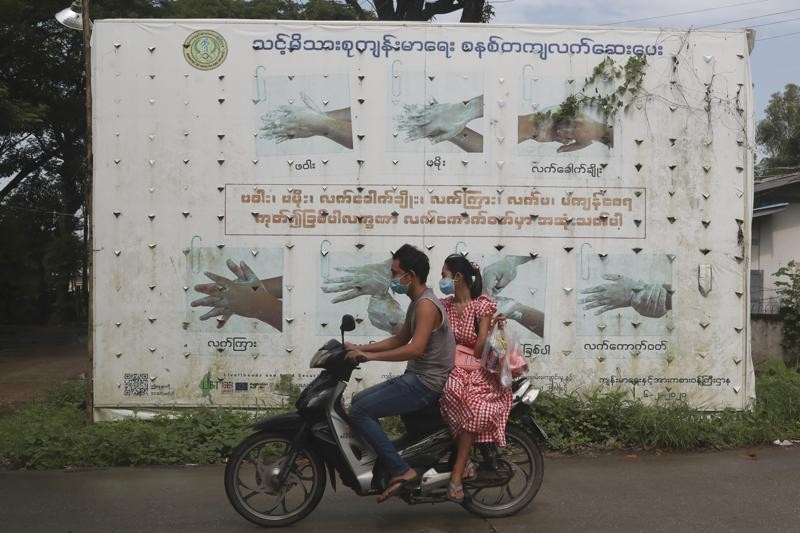 MANILA, Philippines — Philippine President Rodrigo Duterte is warning that Filipinos who refuse to get vaccinated against the coronavirus will not be allowed to leave their homes as a safeguard against the more contagious delta variant.

Duterte said in televised remarks Wednesday night that there is no law mandating such a restriction but added he is ready to face lawsuits to keep people who are “throwing viruses left and right” off the streets.

The brash-talking president adds that for people who don’t want to be vaccinated, “well, for all I care, you can die anytime.”

However, more than public hesitance, the Philippines has been grappling with vaccine shortages.

Nearly 7 million Filipinos have been fully vaccinated and more than 11 million others have received their first dose. That is a fraction of the government’s target of 60 million to 70 million people.

ATLANTA — The mayor of Atlanta has decreed that face masks must be worn in all indoor public spaces including private businesses in Georgia’s largest city.

Mayor Keisha Lance Bottoms also is ordering that city buildings remain closed to the public. Atlanta City Hall has been closed to non-employees since the start of the coronavirus pandemic but had been scheduled to fully reopen Aug. 9.

Bottoms says in a statement released Wednesday that “public health experts overwhelmingly agree, and data has proved, that wearing a face covering helps slow the spread of this deadly virus.”

The mayor’s move came hours after Georgia Gov. Brian Kemp reiterated that he will not impose a statewide mask mandate or curb business and public activities.

The mayor of Savannah issued a looser mask order Monday. At least 15 Georgia public school districts are ordering students and staff to wear masks, covering more than 30% of students statewide.

The governor is following on the heels of California, New York City and other jurisdictions that have announced similar policies this week.

Cuomo is calling on local governments across New York to follow suit and mandate either shots or frequent testing for government workers,

Kelly’s announcement Wednesday came after a central Kansas school district ordered mask use in its building and public health officials in two of the state’s most populous counties recommended that even vaccinated people wear masks in at least some indoor public spaces.

Those moves were a day after the CDC recommended that even vaccinated people wear masks indoors in areas where the coronavirus is surging. That would apply to 84 of Kansas’ 105 counties.

Kelly’s mask mandate takes effect Monday and applies to both vaccinated and unvaccinated people. It covers almost 39,000 government workers, according to legislative researchers.

ORLANDO, Fla. — All the 4,200 nonunion employees of Orange County in Florida will be required to get their first coronavirus vaccine shot by the end of August and the second by the end of September.

Mayor Jerry Demings issued the order Wednesday. He also ordered all county employees to wear masks at indoor county facilities when in the presence of others.

County officials are negotiating with unions to extend the vaccine requirement to the county’s more than 3,000 unionized workers.

The county is home to Walt Disney World and Universal Orlando Resort, and the mayor is urging all private employers in the county to require their employees to get vaccinated and to their workers and patrons customers masks indoors.

Demings acknowledged that he can’t mandate such things under laws passed by the Florida Legislature.

JACKSON, MISS. — Mississippi health officials say a teenager in the state has died of complications related to the coronavirus, marking the fourth death of a child since the start of the pandemic.

The state health officer said Wednesday that the teen had a common underlying health condition. Dr. Thomas Dobbs noted COVID-19 deaths among children are unusual, saying: “It is a rare thing, but it’s a tragedy.”

The Department of Health is not releasing further information on the teen, citing privacy laws.

Gov. Tate Reeves says he does not plan to require the use of masks in schools though the coronavirus vaccination rate in Mississippi remains among the lowest in the nation. Health official say they will echo CDC guidance and recommend that all teachers, students and visitors at schools wear a mask indoors, regardless of vaccination status.

MINNEAPOLIS -- Minnesota health and education officials are calling for all students, teachers and staff to wear masks in schools this fall regardless of whether or not they are vaccinated against the coronavirus, but they won’t require mask use.

The recommendation issued Wednesday follows new guidance from the CDC that everyone including those vaccinated should use face coverings in indoor spaces if they are in areas where virus cases are rising.

Minnesota Health Commissioner Jan Malcolm says the 625 newly confirmed virus cases tallied Wednesday is the highest since May 20. The state has recorded just under 2,800 new cases in the last week, — a 72% increase over the week before. Hospitalizations are also growing at concerning rates, she said.

The commissioner also recommends that everyone age 12 and older get vaccinated against the coronavirus before returning to in-person schooling, sports or other activities.

MONTGOMERY, Alabama — Alabama public health officials are recommending that all students and teachers wear masks in the classroom because of a surge in coronavirus infections.

The Department of Public Health said Wednesday that schools can choose to follow the recommendation or not, but says that “these guidelines represent the best evidence available to protect students, teachers, and staff by reducing the transmission of COVID-19, along with disease, potential hospitalization, and risk of death from this virus.”

Some Alabama school systems have announced they will require students and teachers to wear masks indoors following new CDC recommendation that masks be worn by everyone in indoor spaces regardless of vaccination status.

LANSING, Mich. — Two of Michigan’s largest health systems are requiring all employees, volunteers and medical providers at their hospitals to receive the COVID-19 vaccine.

Spectrum Health, a 14-hospital network in western Michigan, and eight-hospital Beaumont Health on the other side of the state announced the mandates Wednesday. At least four hospital systems in the state now have announced the requirement.

Grand Rapids-based Spectrum has 31,000 employees. Beaumont is headquartered in Royal Oak and has more than 33,000 employees. They join the Henry Ford Health System in Detroit and Livonia-based Trinity Health in requiring vaccinations.

A spokesperson says about 70% of Spectrum’s onsite staff are vaccinated.

ANKARA, Turkey — The number of new coronavirus cases in Turkey climbed above the 20,000 mark Wednesday, reaching a level previously seen in early May.

The country reported 22,291 infections in the past 24 hours, according to Health Ministry figures. It also recorded 76 deaths — the highest number of daily fatalities since mid-June.

Health Minister Fahrettin Koca said in a televised address that 87% of all active cases and 95% of hospitalized patients consisted of people who were not fully vaccinated, and renewed a call for people to get their shots.

Only about 30 percent of the country’s 84 million people have been fully vaccinated, using China’s Sinovac and the Pfizer vaccines.

CHICAGO — The hordes of people expected to descend on Chicago’s Grant Park for the Lollapalooza music festival this week will be required to show proof that they’ve been vaccinated for COVID-19 or tested negative for the disease within the last three days.

The four-day festival starts Thursday and is expected to be back at full capacity, with roughly 100,000 daily attendees. After missing last summer because of the threat of the coronavirus, it will easily be Chicago’s largest gathering since the pandemic started, and one of the country’s.

Public health officials and others have raised concerns that such a large gathering, even outdoors, risks turning into a super-spreader event. Officials in the Netherlands were shocked after a much smaller music festival attended by 20,000 people over two days early this month led to nearly 1,000 cases of COVID-19, CNBC reported. That festival had similar safeguards to Lollapalooza’s.

WASHINGTON – The State Department says Secretary of State Antony Blinken has met the head of the World Health Organization to press for additional studies into the origin of the coronavirus pandemic in China.

Blinken and WHO Director General Tedros Ghebreyesus met Wednesday in Kuwait City, Kuwait, where Blinken is wrapping up an overseas trip.

State Department spokesman Ned Price said Blinken told Tedros that any follow-up probe into the COVID-19 outbreak must be “be timely, evidence-based, transparent, expert-led, and free from interference.”

Blinken also stressed the importance of international unity in order to understand the pandemic and to prevent future ones, Price said in a statement. He added that Blinken and Tedros had both committed to work together with all members of the WHO to “make meaningful, concrete progress in strengthening global health security to prevent, detect, and respond to future pandemics and health threats.”

The meeting, which had not been previously announced, came after China rejected WHO calls for a second investigation into the virus.

SAN JUAN, Puerto Rico — Puerto Rico’s governor announced Wednesday that all public employees must be vaccinated against the coronavirus starting next month as the U.S. territory reports a new rise in cases.

The executive order goes into effect Aug. 16 with few exceptions. Those who refuse to get inoculated will be required to submit a negative virus test weekly. If an employee refuses to get tested, they will be forced to use their vacation days and eventually may not be paid, Gov. Pedro Pierluisi said.

“To finish defeating the pandemic, this is the step to follow,” he said. “Vaccination is the solution.”

Some 27,000 government employees are affected by the order, which comes a day after Pierluisi ordered that masks once again be worn indoors.

The island of 3.3 million people has reported more than 124,000 confirmed coronavirus cases and more than 2,500 deaths related to COVID-19. More than 76% of the population has received at least a first vaccine dose.

“I think it’s very important we say, unequivocally, ‘No to lockdowns, no to school closures, no to restrictions, no to mandates,’” he said in Salt Lake City during a gathering of the American Legislative Exchange Council, a group that pushes conservative policies in Republican-controlled state legislatures.

His address prompted enthusiastic applause from a mostly mask-less crowd of about 1,400.

Florida leads the nation in the rate of new COVID-19 cases and deaths over the past 14 days, driven by the delta variant and a full reopening of the state. Just 48 percent of the state’s population is fully vaccinated.

Health experts say masks are an important tool in reducing transmission of the virus, especially among children who are too young to be vaccinated.

TOPEKA, Kan. — A central Kansas school district is requiring masks in its buildings and public health officials in two of the state’s most populous counties are recommending that even vaccinated residents wear masks in at least some indoor public spaces.

The developments in the Salina school district and Shawnee and Douglas counties in northeast Kansas came quickly after a surge in new COVID-19 cases tied to the faster-spreading delta variant prompted the U.S. Centers for Disease Control and Prevention to change its guidance on masks.

The Salina school district appears to be the first in Kansas outside the Kansas City area to impose a mask mandate. Douglas and Shawnee counties are only recommending masks and not requiring them.