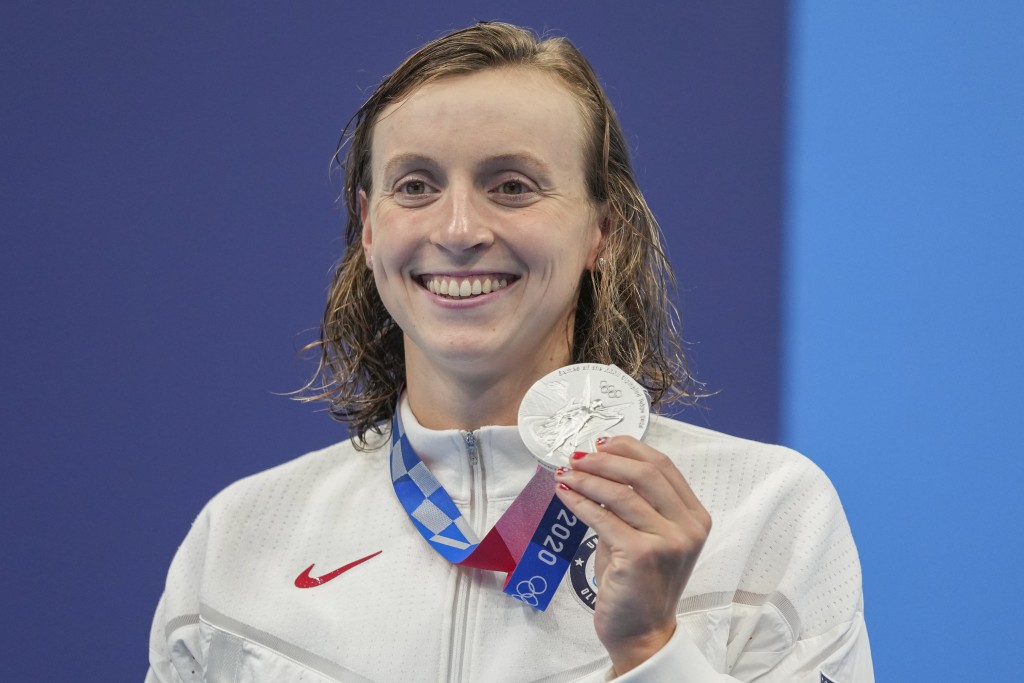 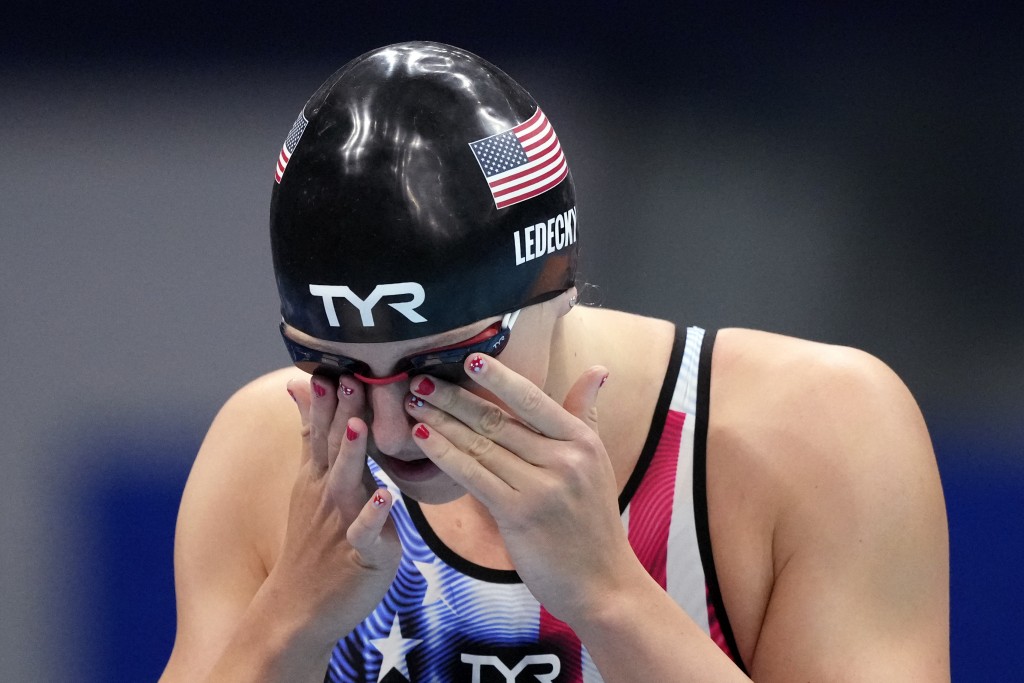 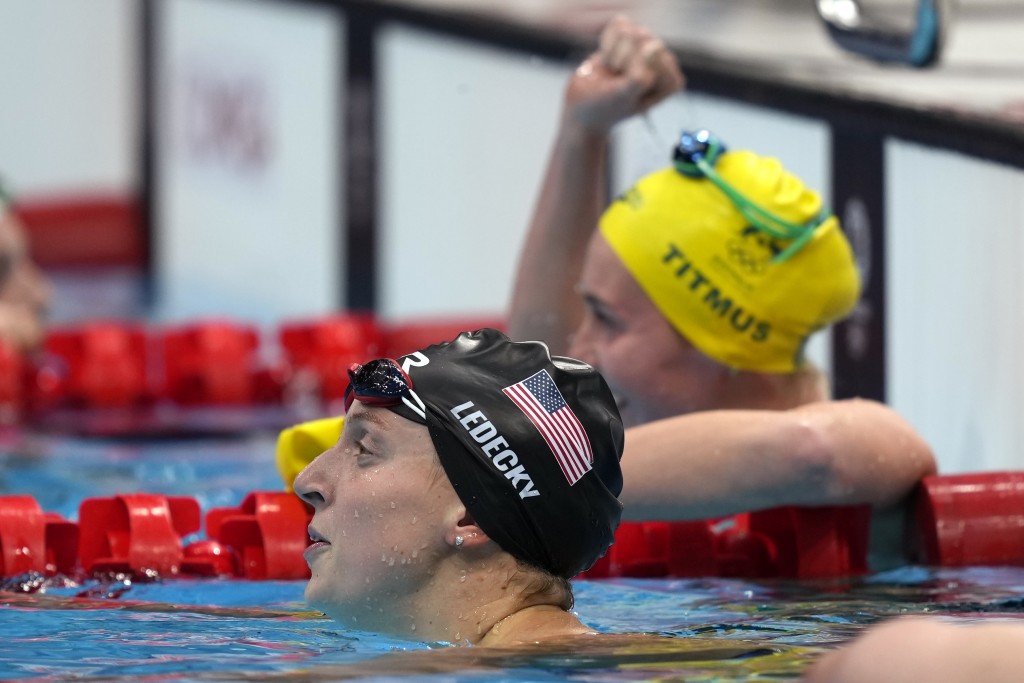 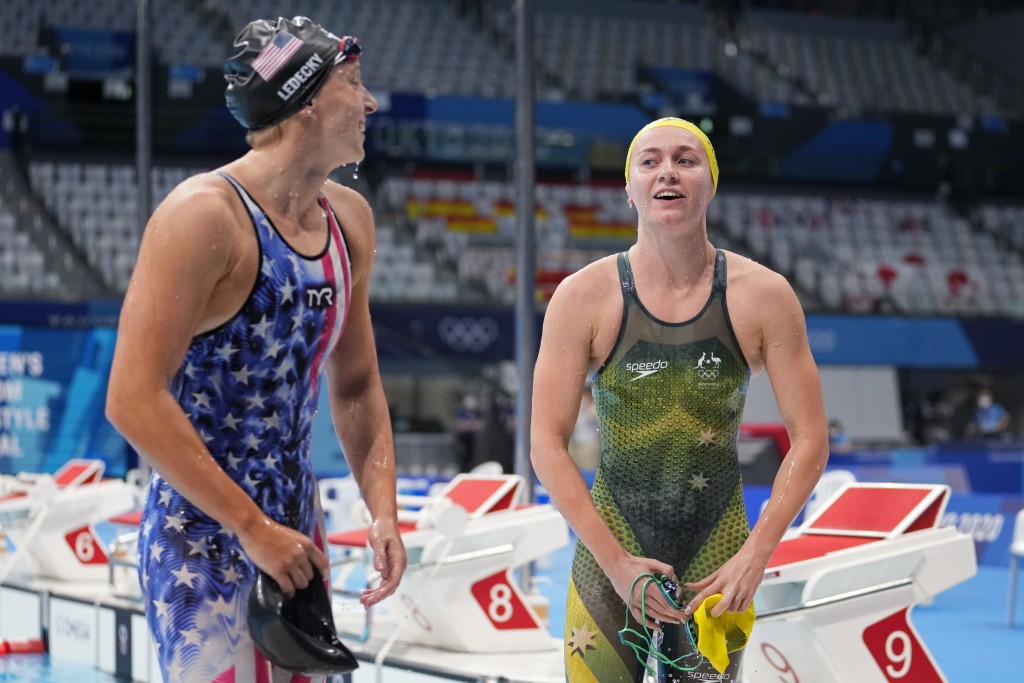 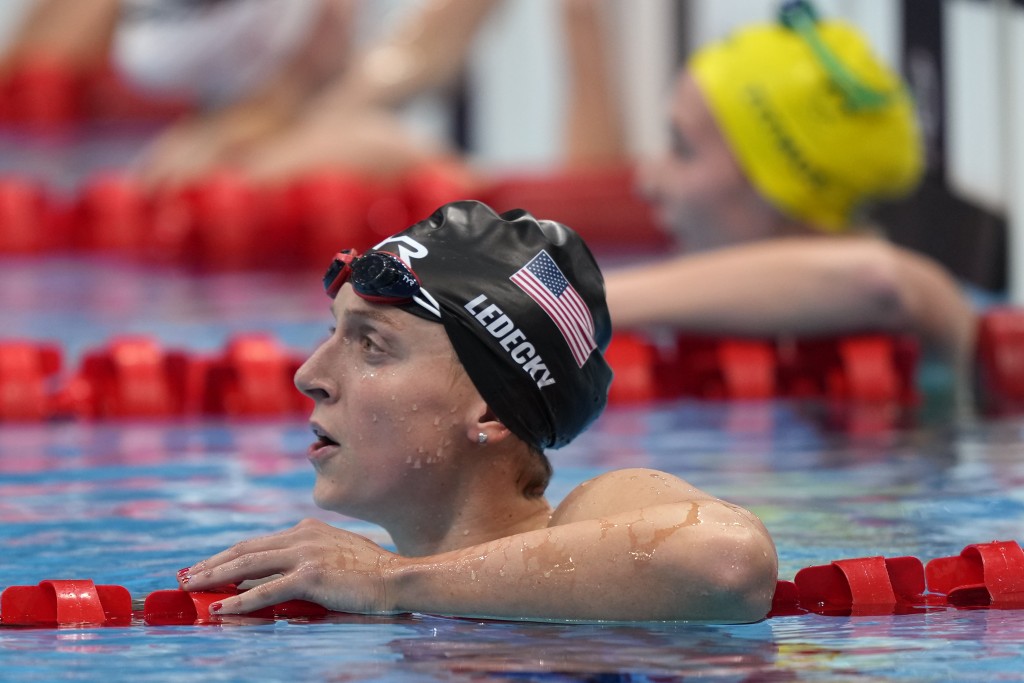 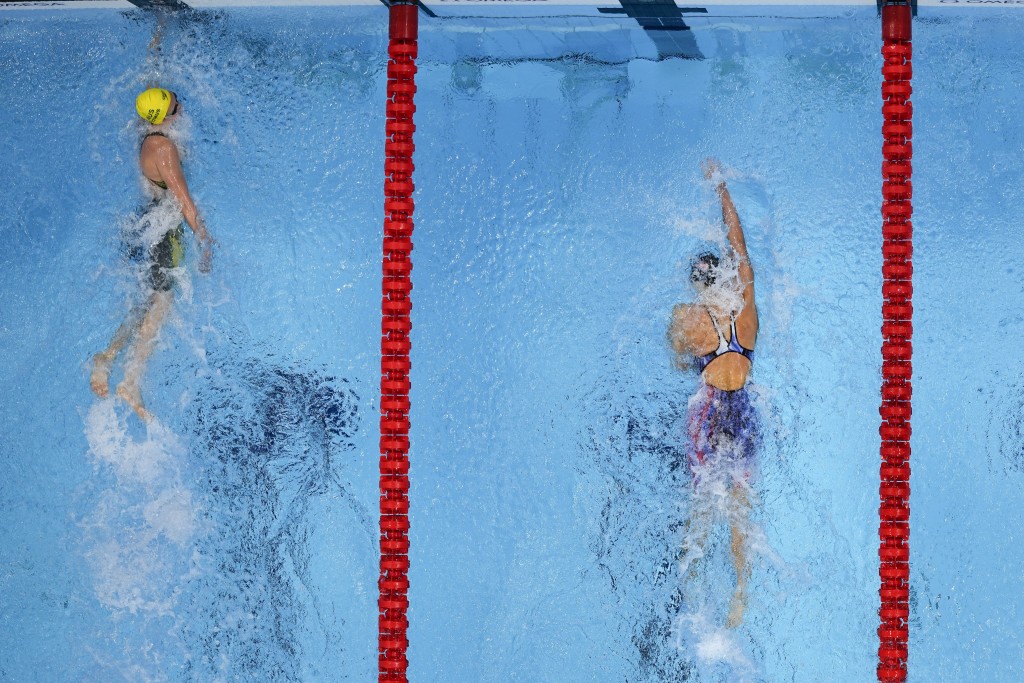 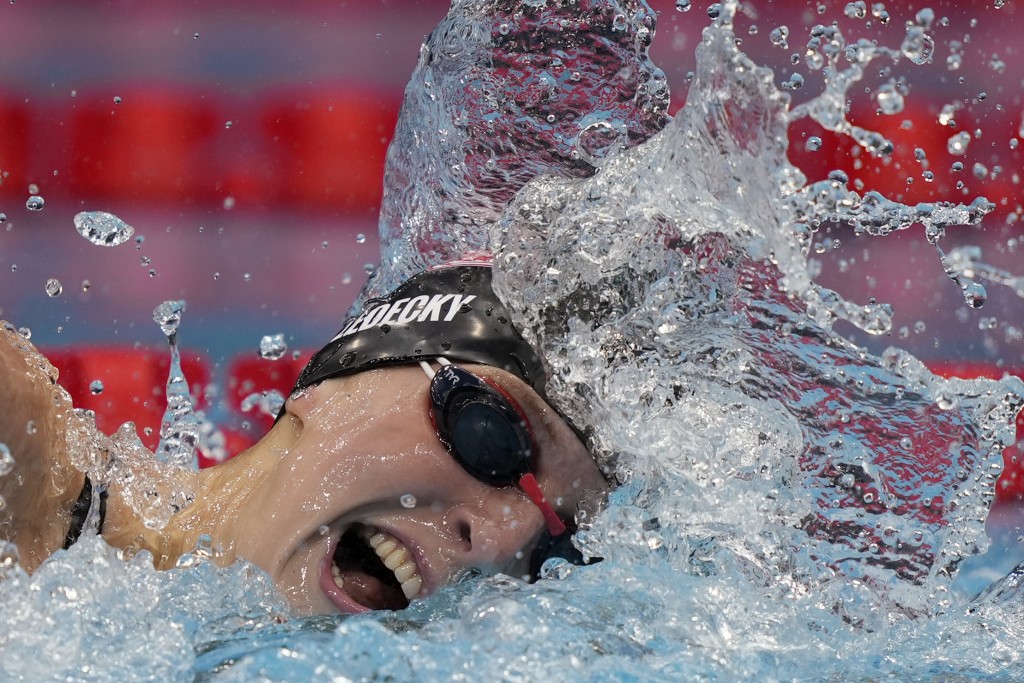 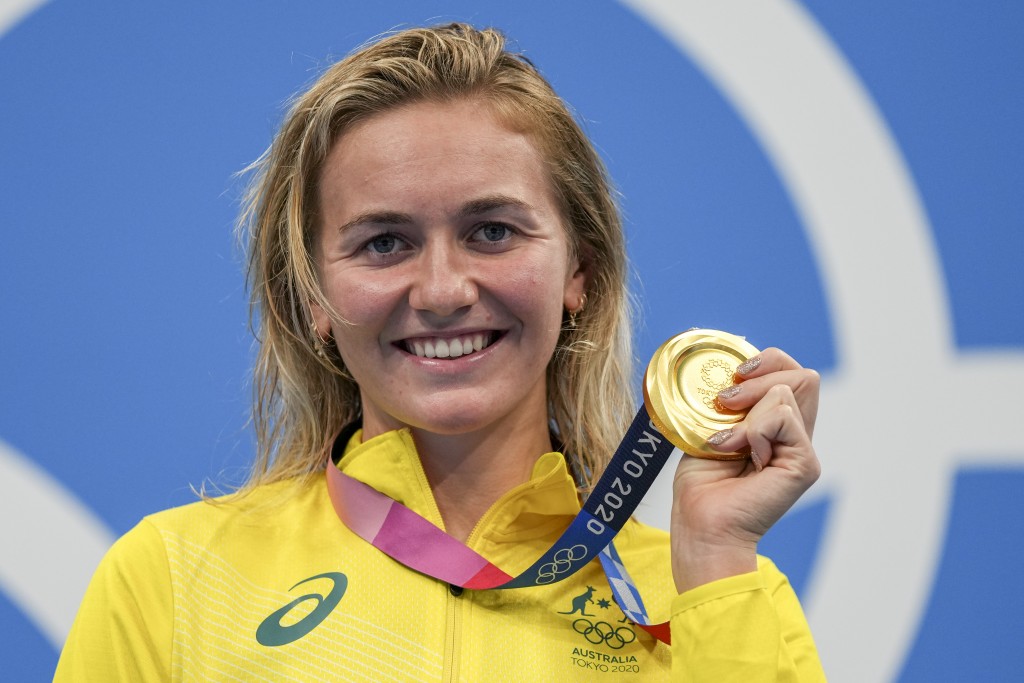 TOKYO (AP) — Katie Ledecky strolled onto the deck first, which meant she was headed to the second spot on the medal podium.

What a strange place for her to be.

For the first time in a brilliant career, Ledecky wasn't the first swimmer to touch the wall in an individual event at the Olympics.

She had nothing to be ashamed of. She swam one of the best races of her career on the biggest stage. She was simply beaten in the 400-meter freestyle by someone who was a bit better on this day.

Still, it was a bit jarring.

“Of course, you always want to hear your national anthem,” Ledecky said Monday. “But I’m just really proud of the time I swam.”

It wasn't quite good enough to beat Australia's Ariarne Titmus, who chased down Ledecky over the final two laps to win in 3 minutes, 56.69 seconds.

It was the second-fastest time ever recorded, surpassed only by Ledecky's world record of 3:56.46 at the 2016 Rio Games.

Ledecky touched in 3:57.36, her fastest time in three years and fourth-fastest in the history of the eight-lap event.

“I felt so good coming into this meet," the 24-year-old said. “I felt like I really believed in myself going into that. It is very satisfying to swim a time like that and start my meet off like that.”

Of course, most people will focus on where she finished.

Ledecky has been second before — in relays and at big-time meets such as the world championships.

But this was a first at the Olympics.

Ledecky won her only individual event at the 2012 London Games, stunningly taking gold in the 800 free as a relatively unknown 15-year-old. She was a big star by Rio, where she backed up the hype by sweeping the 200, 400 and 800 free.

That streak ended at the Tokyo Aquatics Centre, but Ledecky was more focused on the time beside her name, not the number in front of it.

She said her performance was actually “confidence boosting.”

“It may seem silly to some people,” Ledecky said, “but our sport is so time-based.”

While Titmus held back a bit, Ledecky built up a lead of nearly a body length over the first half of the race.

Then the Aussie known as the “Terminator” kicked her stroke into another gear. Furiously slicing through the water, she pulled ahead for the first time as they made the final flip for home.

From there, it was a sprint to the wall, the world's greatest female freestylers racing side-by-side, summoning everything they had inside of them, their arms and legs burning but their competitive fires roaring.

Ledecky posted her quickest lap of the race (29.12 seconds). Titmus went even faster, closing with a 28.67.

After they were done, the swimmers clasped hands over the rope. They climbed from the pool together, sharing a hug and a smile.

“I just thanked her,” Titmus said. “I wouldn’t be here without her. She’s set this amazing standard for middle-distance freestyle. If I didn’t have someone like her to chase, I definitely wouldn’t be swimming the way I am.”

There was none of the animosity that had been projected on their rivalry. While Titmus made it clear she wasn't going to just roll over for Ledecky at the Olympics, those were the words of a confident swimmer. There was no real intent to antagonize her biggest challenger.

“I didn’t really feel the hype, it was more you guys,” Titmus told reporters. “I just tried to race the best I can. I try to ignore everything else. Honestly, I thought I would be more nervous coming into this.”

She had to return to the Tokyo Aquatics Center in the evening for the preliminaries of both the 200 and 1,500 freestyle — the latter a new women's event at these Olympics.

Those are two of three individual freestyle events that remain on Ledecky's Tokyo schedule, not to mention a relay, giving her plenty of opportunities to go down again as one of the games' biggest stars.

She's a huge favorite to take gold in the 800 and 1,500, but the race everyone will be pointing to is a rematch with Titmus in the 200 free.

It should be another thriller.

“I’m really grateful to have her,” Titmus said, already looking forward to Part 2. “Being in a battle is the best thing.”