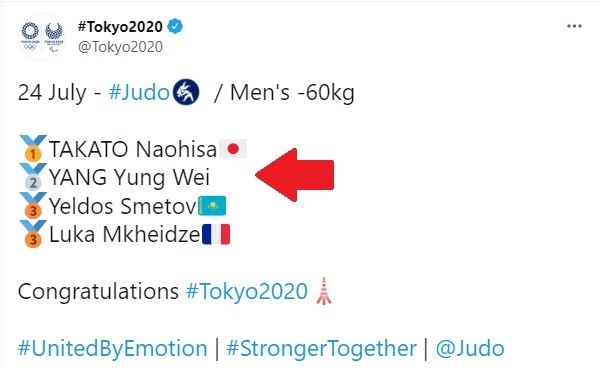 TAIPEI (Taiwan News) — The Tokyo Organising Committee of the Olympic and Paralympic Games (TOCOG) appears to have adopted a policy of not displaying a flag of any kind next to the name of Taiwanese athletes who medal at the games in its Twitter posts.

The first snub appeared Saturday (July 24), when Taiwanese Judoka Yang Yung-wei (楊勇緯) grabbed silver in the men's 60-kilogram category. In a tweet posted that day, the TOCOG posted a photo of Japanese gold medalist Takato Naohisa raising his fist in victory and displayed an icon of the gold medal followed by his name and the Japanese flag.

However, it left a blank space by Yang's name while still displaying the Kazakhstani flag for bronze medalist Yeldos Smetov and the French banner for the other bronze medal winner, Luka Mkheidze. American journalist Melissa Chan noted the omission, writing "Can't even give Taiwan's silver medalist this [Taiwanese flag] in a tweet."

The only other country that appears to be getting the same treatment is Russia, which is being punished for its state-backed doping program by having its athletes compete under the acronym ROC (Russian Olympic Committee) and a modified flag with the Russian colors over the five Olympic rings. For over 40 years, Taiwan has been forced to compete under the name Chinese Taipei and an accompanying white flag. In another illustration of this social media policy, when listing the three medalists in the women's 57-kg category in taekwondo, the TOCOG on Sunday (July 25) only displayed the flag of American athlete while leaving a blank after the names of Russian silver medalist Tatiana Minina and Taiwanese bronze medal winner Lo Chia-ling (羅嘉翎). The policy is inconsistent because TOCOG actually lists the flags for both Chinese Taipei and the ROC on its medal table on its website.

When filling out the contact form to request a comment from the committee on its policy, it became apparent that Taiwan is not listed among countries in Asia. The organization has yet to respond to Taiwan News.

Taiwan was not allowed back into the Olympics until the International Olympic Committee passed the so-called "Nagoya Resolution" in Nagoya, Japan, in 1979, dictating that Taiwan use the ambiguous name "Chinese Taipei" but not its national flag or anthem.