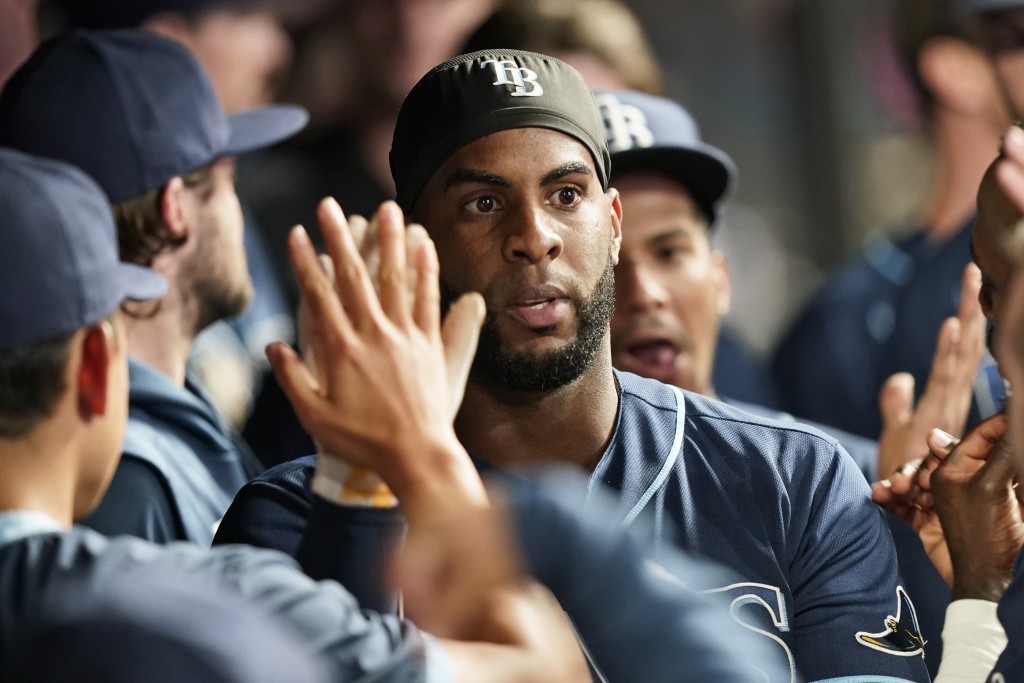 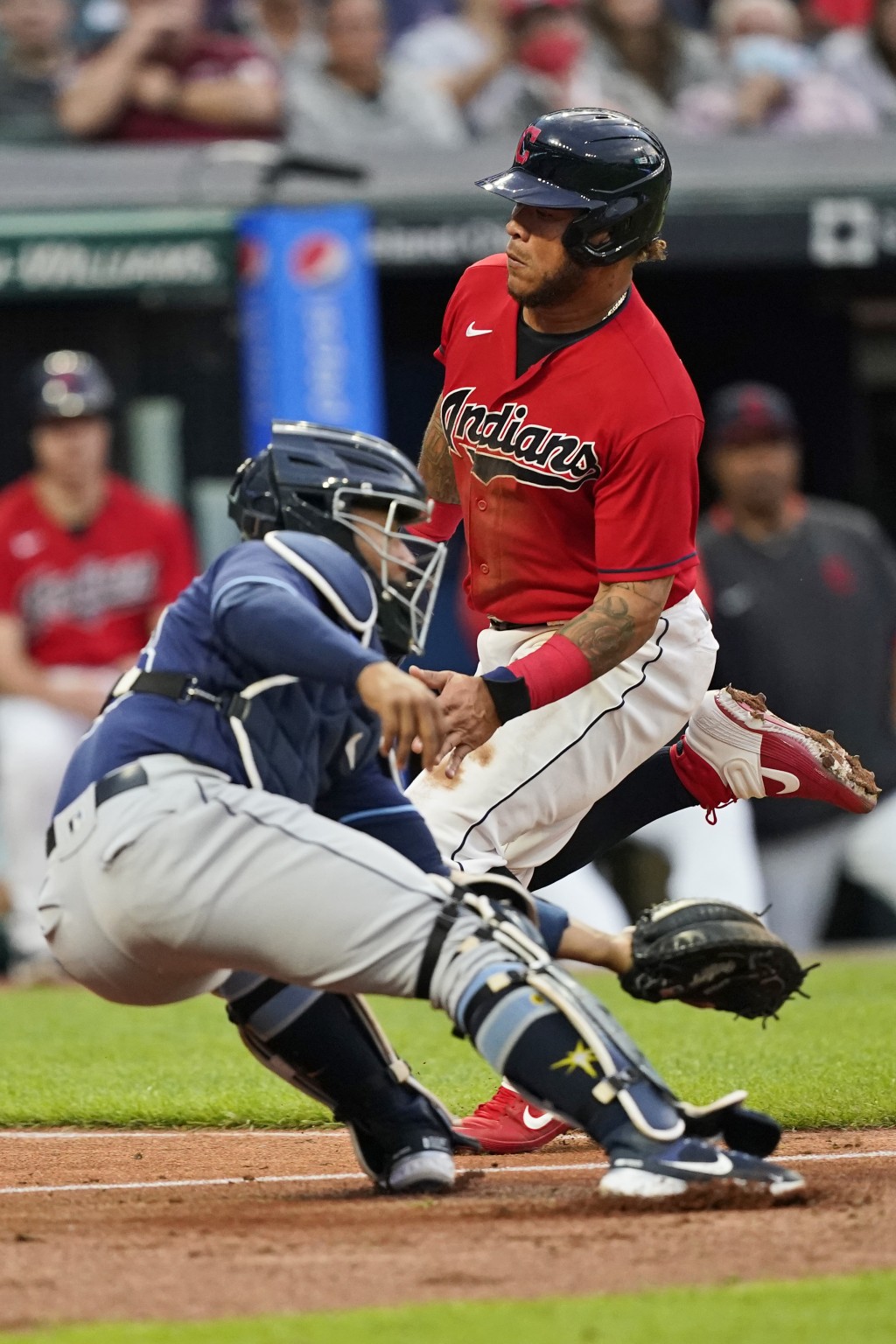 CLEVELAND (AP) — Austin Meadows hit an RBI single in the 10th inning to cap Tampa Bay’s comeback in a 5-4 win over the Cleveland Indians on Thursday night, hours after the Rays acquired slugger Nelson Cruz from Minnesota.

Down 4-2 in the ninth, the Rays rallied to tie it against closer James Karinchak on a leadoff homer by Yandy Diaz and Brandon Lowe’s two-out RBI double.

Pete Fairbanks (3-3) pitched the ninth and Diego Castillo struck out Franmil Reyes and Bobby Bradley with the potential tying run at third in the 10th for his 14th save.

The Rays announced their acquisition of Cruz just before the first pitch. Needing a big bat for the playoff push, Tampa Bay got a potent one from the disappointing Twins. Cruz has 436 career homers, and his presence alone will re-shape Tampa Bay’s lineup.

Indians starter Cal Quantrill allowed just one run in six strong innings before turning it over to Cleveland’s bullpen.

Heaney (6-7) gave up just four hits, two walks and two runs with seven strikeouts, the left-hander’s most effective appearance in six weeks. Heaney fell behind 2-0 in the fourth on an RBI double by Willians Astudillo and a run-scoring groundout from Gilberto Celestino, but Mayfield picked him up with his big hit in the following inning.

Raisel Iglesias picked up his 20th save with a perfect ninth inning.

BOSTON (AP) — Kiké Hernández hit a two-run double that tied the game with two outs in the ninth inning, and Boston took advantage of a record four wild pitches by Brooks Kriske in the 10th to rally past New York.

Xander Bogaerts scored on a sacrifice fly by Hunter Renfroe in the 10th to win it. The victory was Boston’s third straight and snapped New York’s four-game winning streak.

Matt Barnes (5-2) gave up a run in the 10th but got the win. Kriske (1-1) allowed Boston’s final two runs for a blown save, becoming the first major leaguer to throw four wild pitches in a single extra inning, according to STATS. Kriske was optioned to Triple-A Scranton/Wilkes-Barre after the loss.

The Giants trailed 3-1 going into the ninth before scoring four times to extend their lead in the NL West to three games over the defending World Series champions. San Francisco took three of four in a tense series.

Jansen (1-4) fell to 21 for 26 in save opportunities. He has allowed seven runs on seven hits with four walks in one inning over the past two games.

José Álvarez (4-1) got the win and Jake McGee pitched the ninth for his 20th save.

Will Smith hit a two-run homer and Walker Buehler allowed one run in 7 1/3 innings for the Dodgers.

With the victory, the Braves — winners of the last three NL East titles — closed within four games of the idle New York Mets and tied Philadelphia for second place at 47-48.

Atlanta did most of its offensive damage against Phillies starter Matt Moore, who allowed six earned runs in six innings.

Morton cruised for most of the night before stumbling a bit in the seventh when Didi Gregorius hit a leadoff triple and Odubel Herrera followed with an RBI double. Luke Jackson replaced Morton and got two outs before allowing Jean Segura’s RBI single.

The Braves added a run in the ninth when Austin Riley drew a bases-loaded walk off Mauricio Llovera.

Nolan Arenado and Dylan Carlson homered as the Cardinals improved to a game over .500 at 49-48.

Kim (6-5) allowed two runs on two hits and a walk with seven strikeouts in six innings. His last loss came in the second game of the doubleheader on June 20.

Alex Reyes pitched a scoreless ninth to earn his 23rd save.

Adbert Alzolay (4-10) allowed three runs on four hits and three walks, with eight strikeouts in six innings. He is winless in his last seven starts.

Jake Marisnick hit a two-run double to right-center field in the fourth inning for the Cubs.

DETROIT (AP) — Eric Haase hit a three-run homer in the first inning and Detroit extended its winning streak to a season-best seven games with a four-game sweep of Texas.

Zack Short and Victor Reyes also homered for the Tigers.

Texas has lost nine straight, equaling its longest slide this season. David Dahl and Isiah Kiner-Falefa each drove in two runs for the Rangers.

Kyle Funkhouser (4-0) gave up one run in two innings. Starter Tyler Alexander allowed one run on three hits in 3 2/3 innings. Gregory Soto got the last three outs for his 11th save and third in as many days.

The Padres left-hander scattered three hits, struck out eight and walked three in his longest outing since June 4. Snell (4-3) had not gone past four innings in his two previous starts.

Fernando Tatís Jr. struck out three times and was hitless in four at-bats. He walked in the fifth, stole his NL-leading 23rd base and eventually scored on Manny Machado’s sacrifice fly.

Mark Melancon pitched a perfect ninth for his major-league best 29th save in 33 chances.

San Diego scored early on Profar’s RBI fielder’s choice in the second. He increased the Padres’ lead in the fourth with his run-scoring single against Miami reliever Jordan Holloway (2-3).

The Marlins were 1 for 10 with runners in scoring position. The Padres were 2 for 13.

SEATTLE (AP) — Sean Manaea struck out a career-high 13 in seven strong innings, Ramón Laureano drove in two runs and Oakland beat Seattle in the opener of a 10-game road trip.

Manaea was overpowering in winning for the first time since June 14, after having lost his previous four decisions. He allowed three his and threw 106 pitches before being lifted after the seventh inning.

Tom Murphy was the only Seattle batter not to strike out against Manaea. He grounded out, walked and hit a long solo home run on a 1-2 pitch in the seventh inning.

Sergio Romo pitched the eighth and Lou Trivino tossed the ninth for his 16th save.

Laureano had a pair of RBI singles. Matt Olson also had a sacrifice fly in the inning.

Chris Flexen (9-4), who had won his last three starts, lost for the first time since June 2. He allowed two runs.