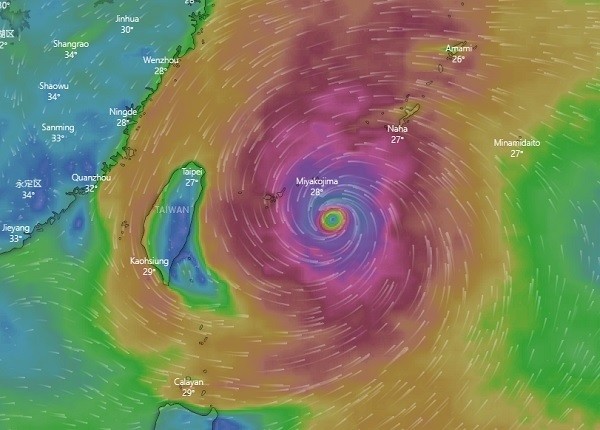 TAIPEI (Taiwan News) — Although Typhoon In-Fa (烟花) is still over 400 kilometers away, Taiwan has already reported over 200 millimeters of rain, level 10 winds, and waves as high as 5 meters in some areas.

As of 2 p.m. today, In-Fa was located 470 km southeast of Taipei and moving west-northwest at a speed of 6 kilometers per hour, according to the CWB. It had a radius of 200 km and was packing maximum sustained winds of 144 kph with gusts of up to 180 kph.

During a weather report at 2:40 p.m., CWB forecaster Hsieh Pei-yun (謝佩芸) said the typhoon appears to be gradually moving toward waters off the northeast coast. For this reason, the CWB has expanded its sea warning for the waters off Taitung, Hualien, and Yilan to include waters north of Taipei and east of Matsu.

Hsieh said that over the past few hours, waves have increased in size significantly, with waves off the northern coast and Matsu reaching at least 5 meters. Coastal areas of Yilan, Hualien, and Orchid Island have reported waves exceeding 4 meters in height, while coastal areas of the southwest are registering waves of up to 3 meters.

Hsieh said that from today through Friday (July 23), winds blowing from the north will rise to between levels 8 and 10 on the Beaufort scale. Hsieh added that the winds will blow as far as southwestern Taiwan and that as of 2 p.m., Taichung, Yunlin, and Changhua have registered level 9 winds.

Although the inner circulation of the typhoon has yet to reach Taiwan, its outer bands have already brought precipitation in the northern part of the country, according to Hsieh. Over the past 38 hours, areas north of Taichung have seen significant amounts of precipitation, with Hsinchu County reporting 269.5 millimeters of rainfall, followed by Miaoli County with 208.5 mm, Yilan County with 199 mm, Taoyuan with 197 mm, and Taipei with 160.5 mm.

Hsieh said that because In-Fa is moving very slowly, this pattern of frequent showers and downpours in northern and western Taiwan will continue throughout the day. For this reason, the CWB has announced an extremely heavy rain advisory for Taipei, New Taipei, Taoyuan, and Hsinchu and Yilan counties, while it has issued a heavy rain advisory for Keelung, Hsinchu City, Miaoli County, and Taichung.

She pointed out that because this heavy rainfall is expected to continue over the coming days, there is an increased possibility of flooding. Therefore, she advised members of the public in northern and western areas where heavy rain alerts are being issued to beware of flooding while outdoors.