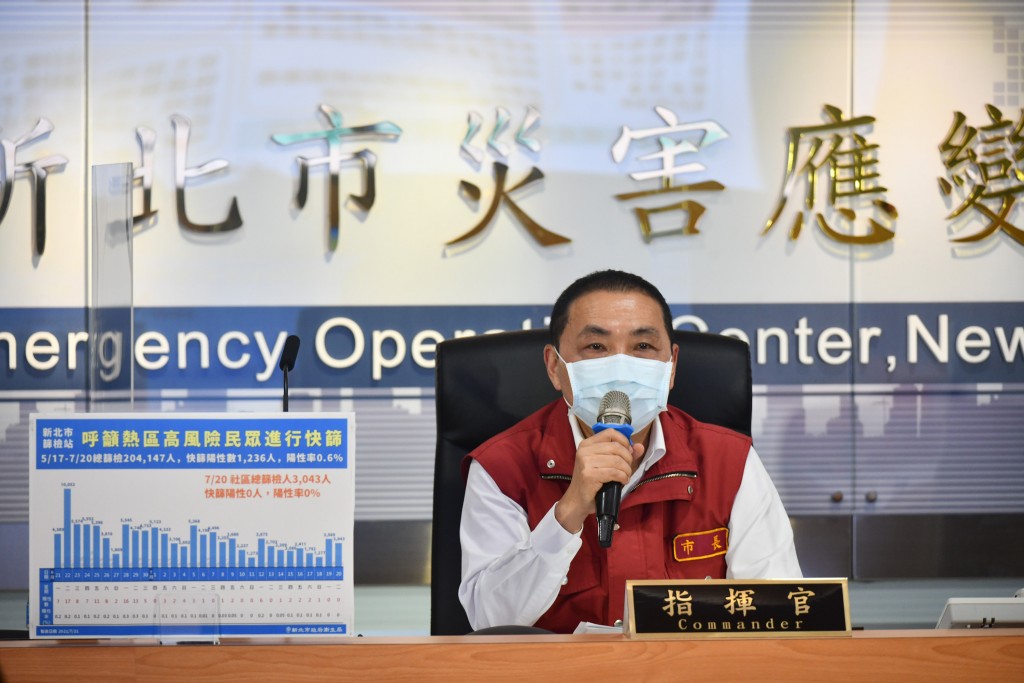 The Central Epidemic Command Center (CECC) raised the alert to Level 3 in mid-May after new domestic infections rose to more than 100 a day. After peaking at more than 500, a gradual decline to fewer than 20 a day has given rise to optimism that the current extension of the alert until July 26 might be the last.

However, New Taipei City Mayor Hou Yu-ih (侯友宜) on Wednesday recommended a phased approach to the easing of COVID restrictions, CNA reported. He based his concern on the fact that it took only four days for the number of daily local infections in the city to balloon from just a few to over a hundred in May, while it took four weeks to see a decline back to single digits.

While Hou said he would respect the CECC’s decision, which is expected within two days, he added that his government had been discussing alternative proposals for a gradual shift from Level 3 to 2. Though he did not reveal details, the mayor said the easing of the restrictions would come in stages, befitting the local situation in New Taipei City.

When the CECC first announced its decision to allow indoor dining at restaurants to resume from July 13, Hou was one of the first to reject the move. Eventually, all but one region, Penghu County, followed suit in maintaining the ban.

The current Level 3 alert bans gatherings of more than four people indoors and nine people outdoors, and mask-wearing is compulsory outside of the home.

Despite Hou’s caution, New Taipei City nevertheless announced that from July 22, it would accept online reservations to visit five museums and one park that had been closed due to the COVID outbreak. The list included a ceramics museum in Yingge, a gold museum in Ruifang, a tea museum in Pinglin, museums in Bali and Danshui, and the Lin Family gardens in Banqiao, CNA reported.