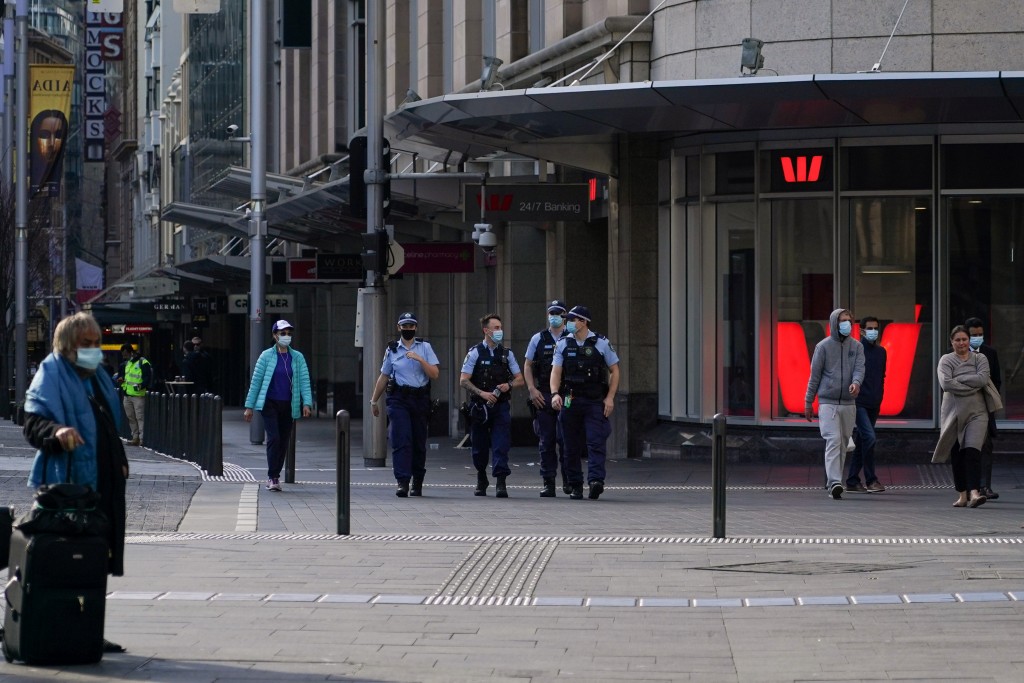 SYDNEY (Reuters) -More than half of Australia’s 25 million population is under lockdown after a third state imposed movement restrictions on Tuesday to contain the spread of the highly contagious COVID-19 Delta variant.

Australia’s coronavirus case numbers and deaths are well below other developed nations, but the country’s use of lockdowns due to a sluggish vaccination rollout is putting pressure on the national government with polls at their lowest in a year and just months before elections are due to be held.

South Australia, a state of 1.8 million people, imposed a seven day lockdown after detecting five infections linked to a returned traveller, just as neighbouring Victoria state extended a five-day lockdown by a week after it failed to stop new cases.

“We hate putting these restrictions in place but we believe we have one chance to get this right,” South Australia premier Steven Marshall told reporters.

Sydney, the country’s largest city and where the latest Delta outbreak started before spreading to other states, is in its fourth week of a five week lockdown.

New South Wales state, of which Sydney is the capital, logged 78 new cases on Tuesday, from 98 a day earlier, its biggest daily dip since Sydney went into lockdown.

At least 21 of the new cases were infectious while in the community before they were diagnosed, a number that authorities said must be near zero for Sydney’s lockdown to be lifted by a July 30 target date.

“We are seeing more hospitalisations, more admissions to ICU, more people on ventilators - we have to stop the spread of COVID,” NSW Chief Health Officer Kerry Chant said in Sydney, referring to intensive care units (ICU).

Ninety-five people with COVID-19 are in hospitals in NSW, with 27 in intensive care and 11 on ventilators. Five deaths have been reported in the state during the latest outbreak, taking the national total to 915 deaths and just over 32,000 cases.

Australia has used a system of lockdowns, tough social distancing rules and swift contact tracing to suppress the infection rate to a fraction of the levels recorded in other jurisdictions, including the United Kingdom and United States.

However the virulent Delta strain and a low COVID-19 vaccine coverage in Australia, with just over 14% of adults fully vaccinated, is testing health services.

Though 13 million Australians were under lockdown, Federal Health Minister defended the country’s response to the pandemic, saying it had saved thousands of lives.

“The scope and scale between the rest of the world and Australia are immeasurably different and we shouldn’t lose sight of what has been achieved on an extraordinary level,” Hunt told reporters.

A five-day snap lockdown in Victoria state was due to end Tuesday night, but authorities extended restrictions by a week until July 27 as officials sought more time to quell the outbreak.

“There are chains of transmission that are not yet contained that we don’t know about and if we would open up we would see how quickly this runs,” Victoria Premier Daniel Andrews said in Melbourne.

Victoria reported nine locally acquired cases, from 13 a day earlier, in line with a downward trend and taking total cases to more than 80. Of the new cases, all but one were linked to the current outbreak, officials said.

Virus-exposed locations in Victoria have risen to more than 300 since the first cases were detected a week ago linked to a team of infectious furniture movers from Sydney.