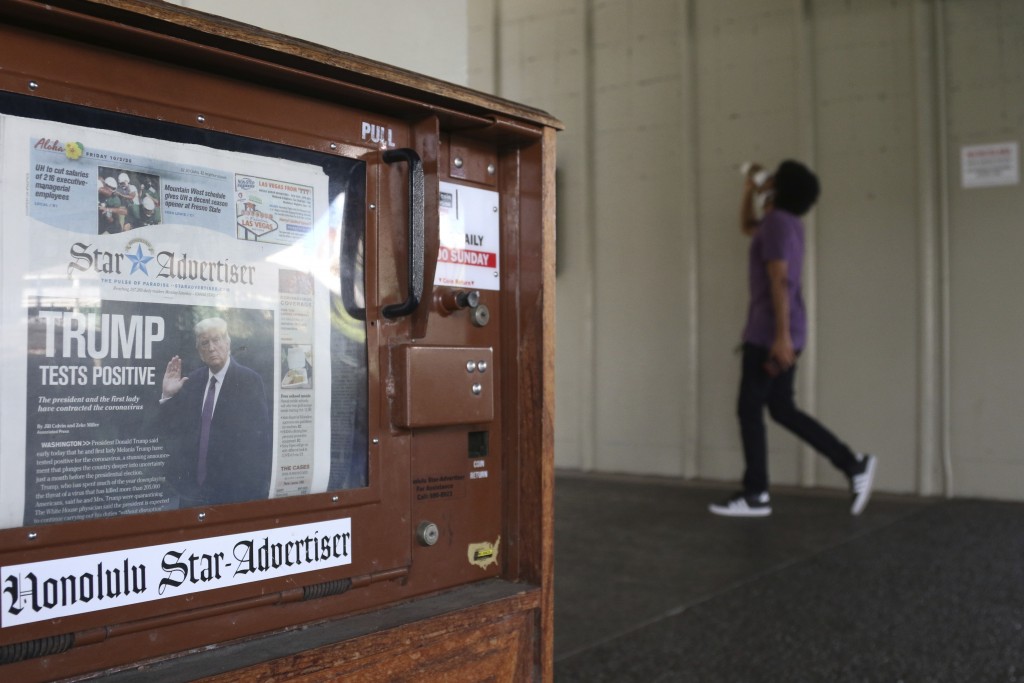 The Press & Journal, a weekly paper covering Middletown, a small town near Pennsylvania's capital, folded in July 2020 because its ad revenue collapsed in the pandemic. Its publishers, Joe and Louise Sukle, decided there was no future for the paper, even after getting a $146,000 emergency small-business loan from the government and donations from the community while seeing its site traffic zoom up.

The town has lost a local news source that covered council meetings, school board meetings, the police and important projects in the area like a new train station.

“The thing that really pains us is there’s a vacuum now,” Joe Sukle said. “The people who suffer that is the public.”

The coronavirus pandemic, a high-stakes U.S. election and a racial reckoning expanded news audiences for many newspapers and TV news channels, making 2020 a blockbuster news year. But it was terrible for the newspaper industry's finances — and also for the public that relies on original reporting to keep it informed about local governments and communities. The overall contraction of the industry — now more than a decade old — is likely to continue in 2021.

Newspaper industry revenue sank 16% in 2020, to $20.2 billion, according to FTI Consulting, as pandemic shutdowns curtailed the economy and scrapped ad spending. The fact that it was also a banner year for digital subscriptions didn't help much, since those tend to bring in much less revenue than print. This year, the revenue decline will revert closer to the recent historical level, with a 2% drop this year, FTI predicts, as some ad spending comes back and digital subscription growth continues while print keeps fading.

Consolidation and cost cuts are now widespread, particularly now that financial firms like the hedge fund Alden Global Capital control a growing share of U.S. newspapers. Over 2,000 papers have closed in the past 15 years, while more than half of journalism jobs are gone, according to a University of North Carolina 2020 report. Most remaining newspapers have grown thinner, although national papers like the New York Times, Washington Post and Wall Street Journal and news cable channels like CNN gained larger audiences during Trump’s presidency — what’s known as the “Trump bump.”

News outlets in smaller U.S. cities may also have gotten a “COVID bump” in readership, said Ken Doctor, a longtime media analyst and the founder of a local journalism startup called Lookout Santa Cruz in California. But now those papers need new strategies to hold on to their readers while convincing them to pay for online news.

The onset of “news fatigue” this year could complicate that crucial task. The New York Times, which has about 7 million digital subscribers, has noted a slowdown in subscriber growth as the news cycle calmed.

Lookout, which launched in fall 2020, dropped “COVID” from the name of its “PM” evening newsletter and launched a new entertainment guide as people emerge from coronavirus cocoons and want things to do, Doctor said.

“Last year was a dramatic increase in overall news consumption,” said Maribel Perez Wadsworth, president of news at Gannett. “We’ve definitely seen some normalization from that.” She said the Gannett papers are trying to focus more on sports and other areas aimed at a country emerging from pandemic-induced isolation, in addition to investigative pieces.

Companies focused on local news have much smaller numbers of digital subscribers. Gannett, which has more than 250 daily papers in cities and towns throughout the U.S., including Phoenix, Detroit, Cincinnati and Indianapolis, as well as the national USA Today, has 1.2 million online subscribers — just half of its 2.4 million print subscribers. Digital circulation is growing but makes up only 3% of the company's current revenue. (Print news subscriptions are generally more expensive for customers than digital.) Gannet aims to expand that number to 10 million by the end of 2025, while holding on to its remaining print readership. It's lost about 100,000 of those print subscribers over the past year.

The Associated Press, which earns most of its revenue from customers like newspapers, TV stations and networks, and websites that sign multiyear contracts to use its stories, photos and videos, is more insulated from the ups and downs of the ad market. Revenue fell 4% in 2020, to $467 million, and has dropped more than 25% since 2010, according to AP documents filed with New Zealand regulators.

The company expects revenue to drop “a few percent” this year because of a big revenue bump in 2020 from special products related to U.S. elections. Excluding that business, 2021 revenue will be flat or even slightly up, said AP CFO Ken Dale. He said he was “unaware of any concerns about news fatigue” and noted that traffic on AP's own news site is growing.

Still, local news outlets mostly depend on local advertising and don't have enough potential digital subscribers to rely on them exclusively, said Penny Abernathy, a Northwestern professor and expert on local news. For her, the key takeaway from 2020 was the “recognition up in Congress all the way down to the local level of how important local news is to us and what is at stake for our democracy if we do not have it.”

So far, government efforts to address the issue haven't gotten very far. One bill in Congress would allow publishers to band together to negotiate terms with tech platforms for the use of their stories. Lawmakers have also introduced bills that would offer tax credits intended to support local news outlets and create a committee to recommend solutions for aiding local media.

At the state level, Massachusetts is setting up a new commission to examine local news business models and coverage. A bill that would create a local news task force in Illinois is awaiting the governor's signature. Abernathy said she's aware of at least eight states that are considering or have formed task forces to examine the loss of local news.