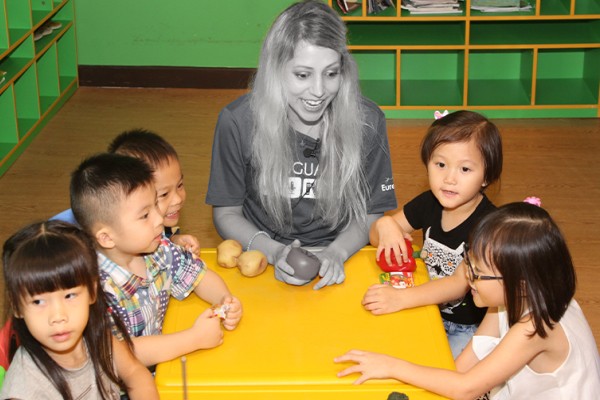 TAIPEI — (Taiwan News) — As the Taiwanese government cautiously reopens its economy after more than two months of restrictions aimed at tackling the COVID-19 outbreak, foreign workers, and especially foreign teachers, have been left out without explanation and with little in the way of aid from the country that once opened its arms to them.

Since the Level 3 restrictions were introduced in May, the livelihoods of many Taiwanese working in affected industries have been on the cusp of collapse, with entertainment venues closed and dining-in banned. Also among the struggling businesses are cram schools, where Taiwanese elementary and secondary students and even toddlers spend much of their time.

These educational businesses have seen massive layoffs, and foreign nationals have been some of the biggest victims.

"The current policy disproportionally affects the foreign community, and hiring foreigners has been at a disadvantage during the pandemic," said Daisy, who has been living in Taiwan for 13 years and is a manager at a private English school in Taipei. She used a pseudonym out of concern for government reprisal.

The policy she mentioned is the government's effort to help people endure the financial impact of the COVID-19 restrictions. According to the requirements, registered cram schools and afterschool childcare centers that were forced to shut down are qualified for a one-time subsidy based on the number of employees and whether they receive the minimum wage.

However, the policy specifically excludes foreign employees without an Alien Permanent Resident Certificate (APRC), which typically can be obtained after a foreigner has lived in the country legally and continuously for five years. At Daisy's school, most of the employees are foreigners, including 20 foreign teachers.

"The foreign staff is paid higher because of their higher cost of living in Taiwan, which means they also pay more in taxes," said Daisy. "And they also pay labor insurance, so it doesn't make any sense why they would be disqualified [from] getting the help from the government."

The Ministry of Education's answer

When asked why foreigners without an APRC are not entitled to the relief package, the Ministry of Education (MOE) told Taiwan News that the decision follows the standard of other government branches while taking into account the limited budget.

What also frustrates Daisy is the unhelpful attitude of government officials and what seems to her as a lack of progress toward returning to normal classes. Although her school is continuing classes online, it has seen enrollment plummet from 575 students pre-restrictions, including those enrolled in a summer camp, to the current 261.

Many parents did not believe an online summer camp made sense and asked for a full refund by July.

After July 13, kindergartens and cram schools remained barred from operating while the central government allowed movie theaters, gyms, and dine-in restaurants to reopen with strict coronavirus prevention guidelines in place. During a press conference, the head of the MOE's Department of Lifelong Education, Huang Yueh-li (黃月麗), explained that the close contact teachers have with students at cram schools is the main reason for the extended ban.

After more than two months of being closed, many cram school owners have begun selling their businesses. The number of schools that are for sale in the country increased almost twofold in the past month, said Hsieh Chih-fang (謝智芳), the director of the After School Educational Association.

According to Hsieh, only around 2,000 of the nation's 12,000 cram schools that applied for the subsidies have received the money so far, as government officials have been overwhelmed by the influx of applications. Compared to workers in other industries, who mainly relied on their profiles in the labor insurance system when applying for the stipends, cram school owners must first make sure all their employees have been registered in the centralized management system, which could further slow down the application process.

He also disagreed with the decision to leave out full-time foreign employees.

The real price of teaching in Taiwan

What many do not realize is the time and effort some foreigners have put in to teach in Taiwan, Daisy emphasized. "I know sometimes cram schools have bad reps in Taiwan, but our school works very hard to make sure everything is done by the book, and all our teachers really have educational backgrounds."

Many of these went through months of paperwork to acquire working visas from abroad before their arrival, but owing to the current restrictions, they cannot switch jobs or even get proper residence certificates from the immigration agency, which, in Daisy's eyes, makes Taiwan much less foreigner-friendly than it portrays itself.

Saying she empathizes with the anxiety and frustration of the kids, who wonder when they can go back to school to see their friends and teachers, Daisy hopes the government will soon have concrete plans for the reopening of cram schools before they all go out of business, including the vaccination of teachers. Her school still pays its employees full salaries and has not laid off anyone since May.

On July 7, Taipei began inoculating teachers who work at public kindergartens and daycare centers to prepare for their July 19 reopening. However, no such arrangement has been made for cram schools and their struggling teachers.