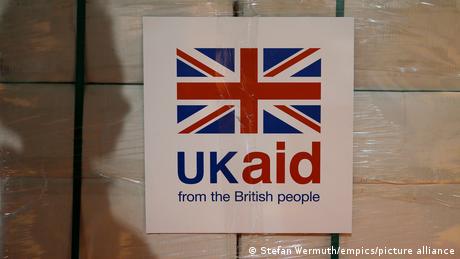 The snap vote, which was won 333-to-298, allows Johnson to keep in place cuts to foreign spending that went into effect in January. That move had come after the government announced in November that it would cut the foreign aid budget due to the economic damage caused by the coronavirus pandemic.

What did Boris Johnson's government say about the cuts?

Johnson argued that the cuts upheld in the vote — a reduction amounting to roughly £4 billion ($5.5 billion, €4.67 billion) this year — would be temporary.

Chancellor of the Exchequer Rishi Sunak hopes to reverse them when Britain had economically recovered from the pandemic.

At issue is the promise, originally made under former Prime Minister David Cameron, that the government would not cut foreign spending to below 0.7% of GDP. The new cuts put that sum at 0.5%.

"We believe in the power of aid to transform millions of lives," Johnson said. "This is not an argument about principle, the only question is of when we return to 0.7%."

What did critics of the foreign aid cuts say?

Critics fear that it may take years before the economy truly recovers, making the cuts indefinite.

Keir Starmer, leader of the opposition Labour Party, said the UK was the only country in the G7 group of wealthy nations to cut its foreign aid budget at a time when poor countries are desperately in need.

"That is not the vision of global Britain that we want to see," said Starmer.

David Cameron, a member of Johnson's Conservative party, took to Twitter Tuesday to voice his disappointment.

But Cameron wasn't the only former prime minister among the Conservatives to come out against the cuts.

Johnson's predecessor Theresa May did so as well, saying: "This isn't about palaces for dictators and vanity projects. It's about what cuts to funding mean: that fewer girls will be educated, more girls and boys will become slaves, more children will go hungry and more of the poorest people in the world will die."

Disgust over the move among Conservatives was summed up by MP Andrew Mitchell, who previously served as the UK's international development secretary. "There is an unpleasant odor wafting out from under my party's front door," he said.

The issue of foreign aid within the UK

The topic has featured prominently among right-wing media outlets that endorse cuts but has also sparked anger and criticism among groups involved in humanitarian projects abroad.

Danny Sriskandarajah, CEO of the charitable group Oxfam, called the result of Tuesday's vote "a disaster for the world's poorest people."

"These cuts won't balance the books; the government is putting politics above the lives of world's most vulnerable communities," he said.