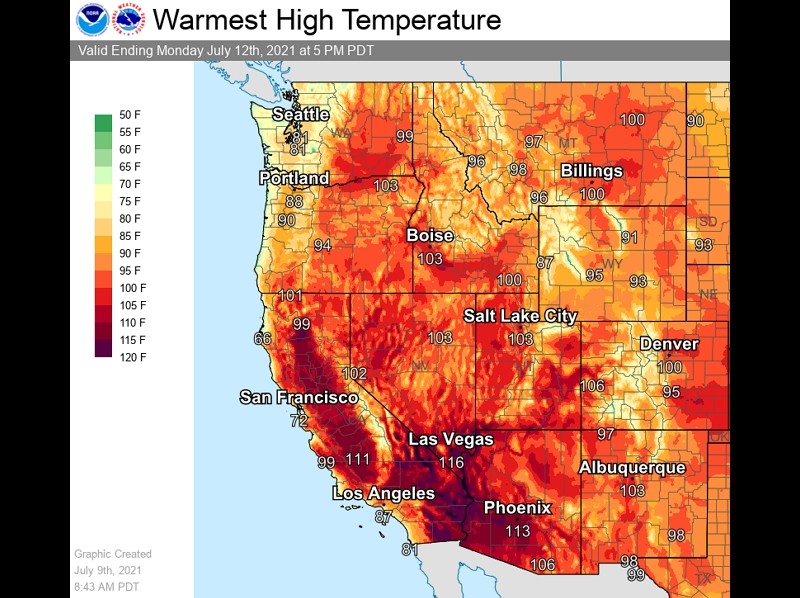 July 9 (Reuters) - Western states are bracing for more scorching weather this weekend after the hottest month of June on record in the United States killed scores of people, strained electric grids and depleted reservoirs.

The National Weather Service has issued an excessive heat warning for much of the West through Monday evening, predicting "dangerously hot conditions" including temperatures up to 130 degrees Fahrenheit (54 degrees Celsius) in Death Valley, California.

Temperatures are expected to soar above 100 degrees F (40 degrees C) in multiple states.

"Long standing record high temperature values are likely to be rivaled or broken," the weather service said, warning of the elevated risk of heat-related illnesses.

The extended heatwave, which coincides with a record-setting drought, has already killed at least 116 people in Oregon alone, the state medical examiner said.

The extremes in the Pacific Northwest would have been "virtually impossible" without human-caused climate change, according to a study by World Weather Attribution, a collaboration of climate scientists around the world.

The National Weather Service's color-coded map shows most of California and large swathes of Oregon, Idaho, Nevada, Utah and Arizona shaded pink for an excessive heat warning, meaning temperatures are expected to reach or exceed 105 degrees.

Further patches of those same states plus Washington, New Mexico and Colorado are colored in orange for a heat advisory, when temperatures are expected between 100 and 104 degrees.

This comes after the hottest June in 127 years of record-keeping, according to the National Oceanic and Atmosphere Administration.

The average June temperature in the contiguous United States was 72.6, or 4.2 degrees above average, surpassing the record set in June 2016 by 0.9 of a degree, the NOAA said.

Eight states recorded their hottest June on record and another six states logged their second hottest June, the NOAA said.