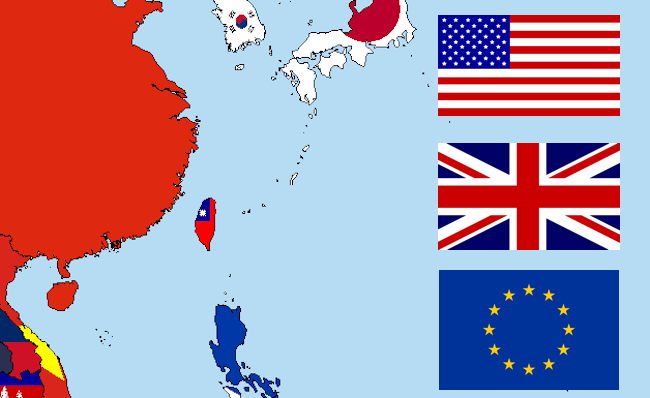 KAOHSIUNG (Taiwan News) — Much like the political scene here in Taiwan, the U.S. is a country massively split along party lines.

There are no more than a handful of issues that bring Republicans and Democrats together. Of late, it is notable that one of these issues has been Taiwan.

However, this week, Kurt Campbell, White House coordinator for the Indo-Pacific, described Taiwan-U.S. relations as a "dangerous balance." He went on to say that while the U.S. supports a strong "unofficial relationship… we do not support Taiwan independence."

This comment has been seized on by pro-China KMT supporters in Taiwan and Chinese Communist Party (CCP) officials as a snub to the Democratic Progressive Party (DPP) and a sign that closer ties with China is Taiwan’s only option. This interpretation is complete nonsense, of course, but it is understandable that people might be worried by such a statement from a high-ranking U.S. official.

The reality is that Taiwan-U.S. relations are the strongest they have been for very many years. Ever since then-President-elect Donald Trump took a call from President Tsai Ing-wen (蔡英文), the situation has been heading upward.

Off the back of that legislation, former U.S. Health Secretary Alex Azar visited Taiwan last August, while former Under Secretary of State for Keith Krach represented the American government at the memorial service for former Taiwanese President Lee Teng-hui (李登輝).

One notable, but often overlooked sign of the U.S. government’s intentions toward Taiwan was the unveiling of a new US$250 million compound to house the American Institute in Taiwan (AIT), which serves as the de facto embassy. The role of AIT in driving U.S.-Taiwan relations cannot be overstated, which is why the appointment this week of Sandra Oudkirk, a senior diplomat described as a “friend of Taiwan” by the Ministry of Foreign Affairs, as its new head is another hugely positive sign.

The appointment of Oudkirk to the AIT looks like a clear message from the Biden administration that it intends to further deepen Taiwan-U.S. relations and maybe even move them to the next level. The news was, however, possibly overshadowed by the unexpected but welcome comments by the deputy prime minister of Japan.

In a speech on Monday (July 5), Aso Taro made a reference to the ongoing Chinese threats against Taiwan by saying “the situation over Taiwan is becoming extremely intense.” He then added that “if a major incident happened (in Taiwan)… Japan and the U.S. must defend Taiwan together.”

This statement builds on comments last month by Japanese Defense Minister Kishi Nobuo who said that Taiwan’s security is directly linked to that of Japan. It constitutes a major policy shift for Japan, which since the end of World War II has effectively been a pacifist state.

The Japanese government is effectively saying that if China tries to invade Taiwan, Japan and the U.S. will defend it and that it would be in the interest of both countries to protect Taiwan. This is a huge statement from Japan.

This comes after Japan's generous vaccine donations and Kishi Nobuo’s description of Taiwan as “a country."

Japan is the U.S.’ closest ally in the region. It would be naive to think Tokyo has not discussed Taiwan privately with Washington, most likely with Taipei's involvement too. It seems highly likely that they are coordinating their activities.

Perhaps this symbolizes the future direction for both Japan and the U.S. The big question is where do we go from here?

However, it is clear from Kurt Campbell's comments that the U.S. is not ready to provoke China by abandoning its "one China" policy yet. Japan is unlikely to either.

Unilateral recognition of Taiwan by either country (or any other) would result in a furious reaction from Beijing. It would come at a huge economic cost and could also put Taiwan at greater risk.

However, multilateral recognition would make it much harder for China to lash out. If the U.S., Japan, the U.K., the EU, and multiple developed democracies from around the world abandon their "one China" commitments and recognize both Beijing and Taipei at the same time, what could the CCP do?

The CCP would be angry, of course, but would it sever diplomatic ties with all these actors at the same time? It seems highly unlikely.

Would there be economic reprisals? Possibly, but with all of these countries standing together, this would ultimately end up hurting China more than anyone else.

Would such a move provoke an invasion? With all these countries backing Taiwan and China knowing that a rushed campaign has far less chance of success, this also seems unlikely.

Japanese and American policies toward Taiwan are clearly edging towards this. The annexation of Hong Kong has made it more likely that the U.K. would support such a move, while the EU is also becoming increasingly China-skeptic.

China’s aggression toward Australia, its illegal detention of Canadian citizens, and its invasion of Indian territory mean all of these countries could be won over as well.

The recent Western approach toward China on issues like Xinjiang, Hong Kong, and the COVID-19 pandemic have been increasingly multilateral. It makes sense to follow that approach with Taiwan too.

Such a step could ultimately be the solution to the so-called "Taiwan problem."