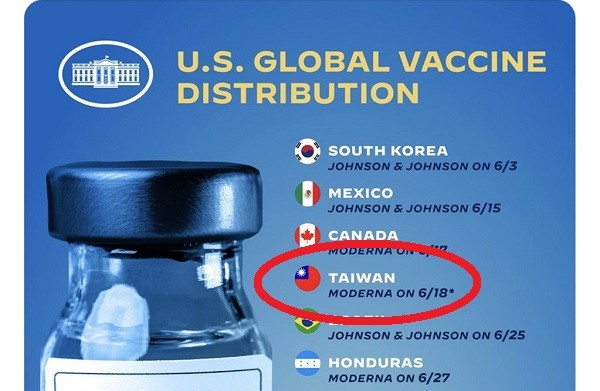 TAIPEI (Taiwan News) — Senator Ted Cruz (R-TX) on Thursday (July 8) accused the Biden administration of being weak on China, while Taiwan's Ministry of Foreign Affairs (MOFA) called on the U.S. not to cause a "misunderstanding" after a White House tweet containing the Taiwanese flag mysteriously disappeared on Wednesday (July 7).

On Tuesday (July 6), the White House posted a tweet in which it cited President Biden as describing the U.S. as an "arsenal of vaccines for the world" and mentioned that Taiwan had been included among the recipients of 40 million donated vaccine doses so far. In an image that was included in the tweet, Taiwan's flag was displayed next to the entry for Taiwan, which stated that the country had received Moderna COVID-19 doses on June 18, when 240,000 were delivered.

That same day, Taiwanese President Tsai Ing-wen (蔡英文) retweeted the post and thanked the U.S. for its generosity, writing "Together, we will beat this pandemic." However, on Wednesday, the White House tweet was suddenly deleted, leading many to speculate it had been taken down for fear of angering China.

MOFA Spokesperson Joanne Ou (歐江安) on Thursday (July 8) responded to the deletion of the tweet by saying that there have been many different interpretations of its meaning among the media. She said that MOFA has asked its representative office in the U.S. to "remind the United States not to cause unnecessary speculation or misunderstanding from all walks of life due to the removal of the related tweet." Reuters that day cited a White House National Security Council spokesman as saying that the scrubbing of the tweet was "an honest mistake" by the team in charge of graphics and social media and stressed that it was not meant to represent a shift in U.S. policy towards Taiwan.

On Thursday evening Washington time, Cruz retweeted the Reuters report. Next to a small image of Taiwan's flag, he proclaimed, "This is the flag of Taiwan." He accused the Biden administration of being "terrified to acknowledge" the flag "for fear of offending communist dictator Xi."

He then alleged that Biden is "weak on China" and warned that "appeasement never works."

When asked about the incident by a Voice of America reporter at a press briefing on Thursday, White House Press Secretary Jen Psaki said, "This was an honest mistake," and emphasized that "we remain committed to the one-China policy."

The deletion of the tweet containing the flag came just one day after the White House coordinator for the Indo-Pacific Kurt Campbell said "We do not support Taiwan independence" during an online discussion hosted by the Asia Society Policy Institute (ASPI). Both incidents have been interpreted by Taiwanese pundits as a sign of the Biden administration backing off from previous overtures toward Taiwan.

Thank you to the US for your generosity. Together, we will beat this pandemic. https://t.co/DNvDbigsmj

This is the flag of Taiwan:

The Biden White House is terrified to acknowledge that fact, for fear of offending communist dictator Xi.

Biden is weak on China. And appeasement never works. https://t.co/1E6s0Bg2P4