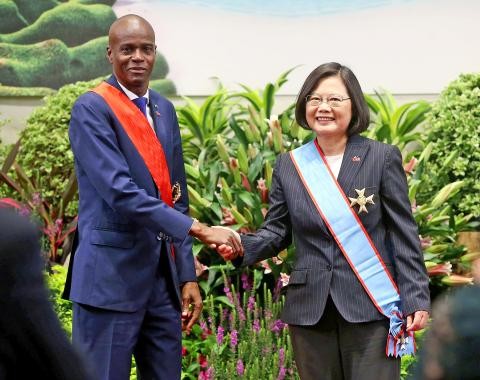 TAIPEI (Taiwan News) — The Ministry of Foreign Affairs (MOFA) expressed shock and grief at the assassination of Jovenel Moïse, the president of diplomatic ally Haiti, on Wednesday (July 7).

He was killed and his wife injured during an armed attack on his residence during the early hours Wednesday, local time, reports said. Moïse had been president since 2017, and he visited Taiwan in May 2018. Taiwan’s President Tsai Ing-wen (蔡英文) visited the Caribbean country and met him again in July 2019.

“We’re deeply shocked & grieved by the assassination of President Moise & the wounding of the first lady,” MOFA said in a tweet.

“The government & people of Taiwan condemn such senseless violence & stand in solidarity with Haiti at this difficult time,” the message continued.

The two countries opened diplomatic ties in 1956, with Haiti one of Taiwan’s remaining 15 allies. Its new ambassador, Roudy Stanley Penn, presented his credentials to President Tsai on Tuesday (July 6) before giving an interview to the Taiwan News.