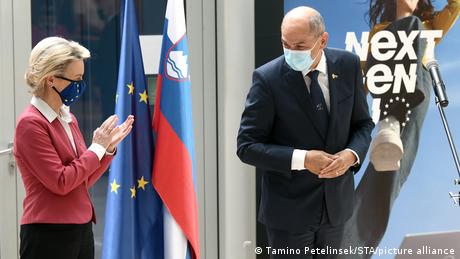 Arriving in Strasbourg, Jansa was greeted with a protest sign demanding his government "protects the rule of law."

He has attacked independent journalists from his Twitter account and supported former President Donald Trump's claims that last November's elections in the United States were rigged.

Inside the European Parliament chamber, MEPs listened to Jansa outline his priorities for Slovenia's six-month EU presidency. During the subsequent debate, many had harsh words about his domestic record.

MEP Malik Azmani, the Dutch vice-president of the liberal Renew Europe group, accused Jansa of wanting to be part of a "sinister club" of leaders in the EU who do not respect rule of law — a nod towards the prime ministers of Hungary and Poland who have locked horns with Brussels over their restrictive measures on press freedom and moves to install politically aligned judges.

Persistently defiant of such criticism, the Slovenian premier, who is enjoying his third time in charge of the country, said "there are different ways of exporting the story," insisting that whenever he is prime minister, the country's ranking on the press freedom index improves.

Members of the European People's Party — the political group in the EU to which Jansa's domestic Slovenian Democratic Party belongs — also pressured the him to remain vigilant.

"Nationalism and populism always use times of crisis to attack these rights," said Spanish EPP MEP Dolors Montserrat. "The path toward tyranny can only be avoided if we bolster the rule of law."

One of the issues frequently raised by MEPs was the fact that Slovenia is yet to nominate two candidates to be "delegated prosecutors" to the newly founded European Public Prosecutor Office (EPPO) — a body created to prevent misuse of money from the EU budget.

A number of critics have called on the EU Council to suspend money from the EU's €750 billion ($888 billion) COVID-19 recovery package from going to the Jansa government until it fulfills this obligation.

As one of 22 of the 27 EU member states to sign up to the EPPO, Jansa said he wondered why all the pressure was on him but "nobody is talking about the five countries who didn't even join the EPPO and are nevertheless enjoying EU funds."

Ireland, Poland, Hungary, Sweden and Denmark have not joined the body.

Pandering to voters at home

Jansa blames a change in justice minister — somewhat ironically necessitated by a prior dispute over this issue — for the delay in the nomination of the delegated prosecutors and tried to reassure MEPs that this would be done by the autumn.

Some EU observers believe that the contrarian role Jansa is playing on the European stage is predominantly directed towards his audience at home.

"He's enjoying this kind of renegade position, otherwise he would operate differently. He resumed power in this way and it's useful for him, at least domestically, to look like he's changing things in the EU," Eric Maurice, head of the Brussels office of the Robert Schuman Foundation, told DW.

For now, Jansa has limited his attacks on journalists and the judiciary to a war with words. Unlike Poland and Hungary, he is yet to table judicial or constitutional reforms which could change the nature of Slovenia's democracy.

While the key agenda items for the Slovenia's presidency are to ensure a COVID-19 vaccine uptake and to participate in the distribution of EU funds to boost the economic recovery, Jansa was also keen to highlight the need for the EU to grow.

Albania and North Macedonia have seen the start of negotiations for them to join the EU delayed on multiple occasions — France, the Netherlands, Denmark and others fear the EU already has enough trouble fighting internal corruption to be bringing on countries where such concerns are rife.

While the EU Council presidency does not mean Slovenia can guarantee progress on the matter, it does give Jansa the power to put it in the spotlight.

"If we move things up in the agenda than we will have actual time to be able to make concrete steps," Jansa told journalists during a press conference after the debate.

He said he hopes the talks would start after the summit of EU leaders scheduled for October.