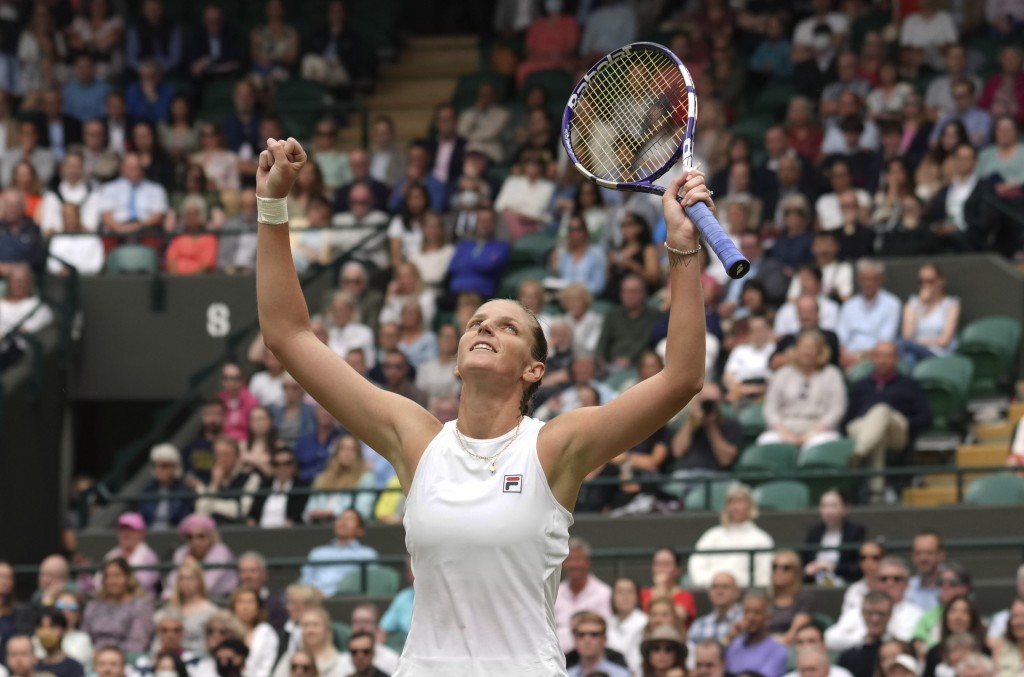 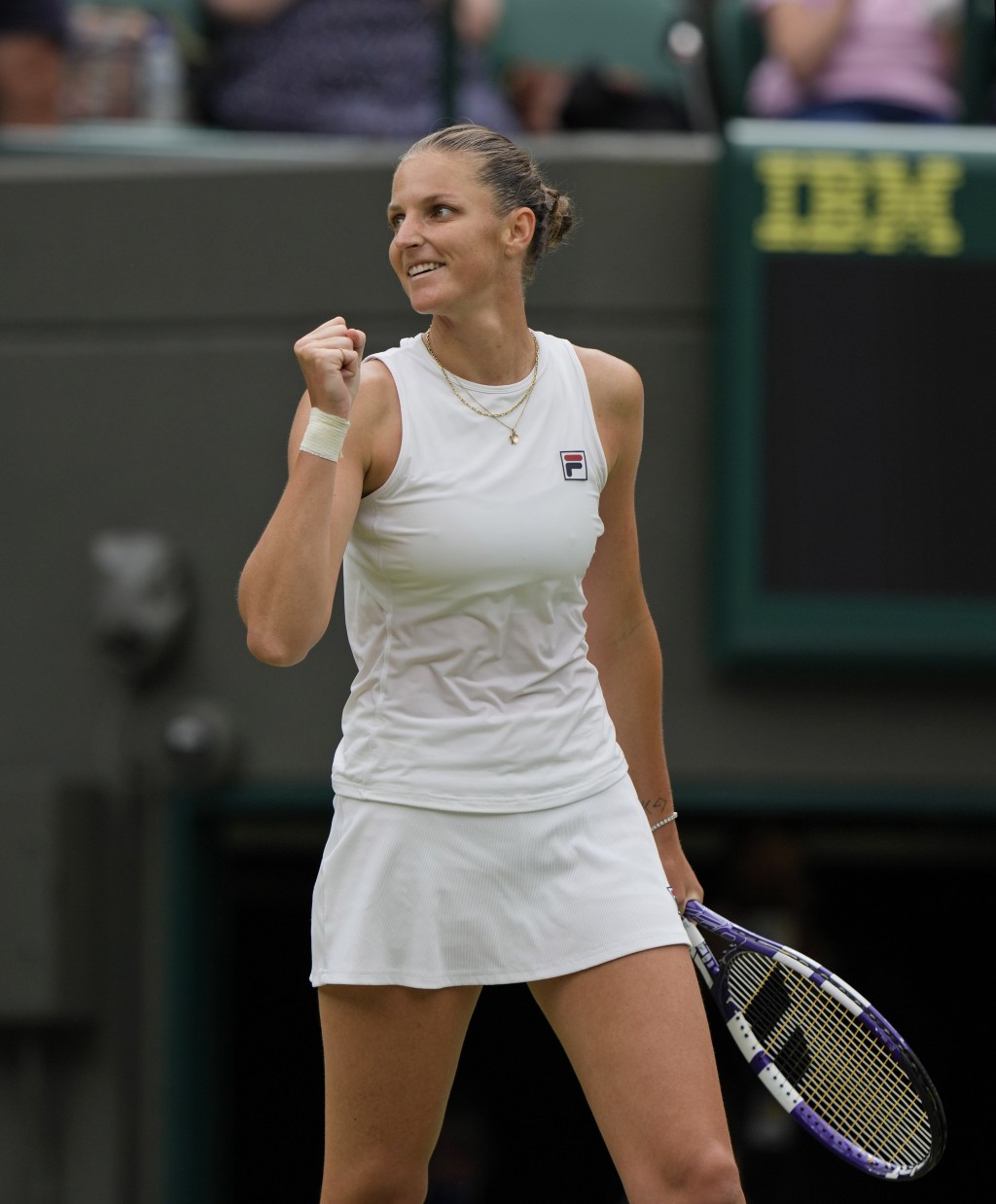 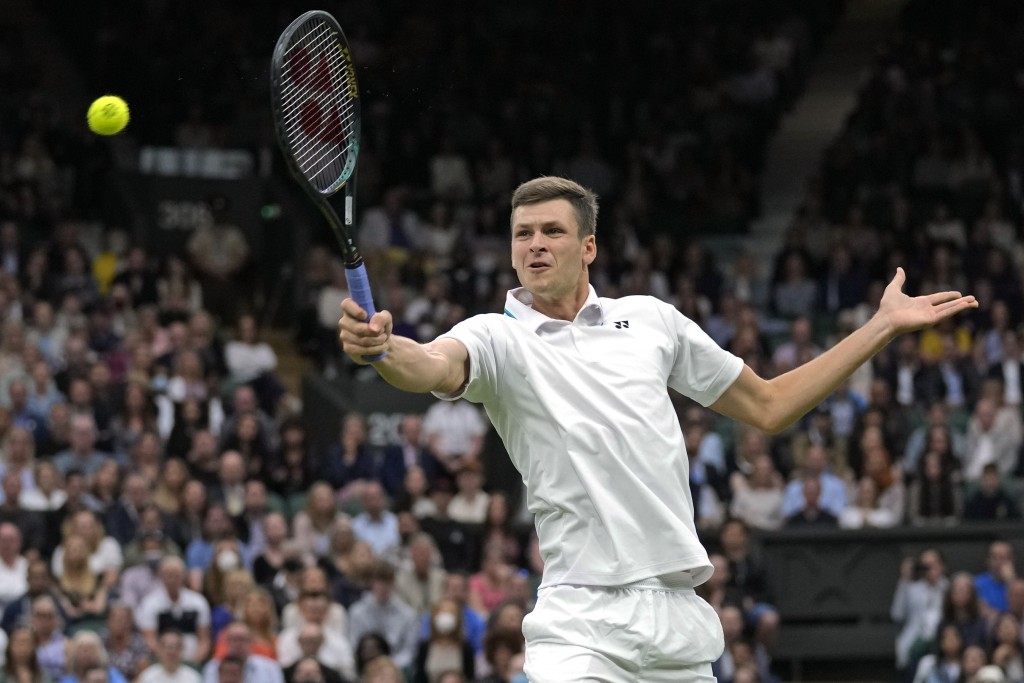 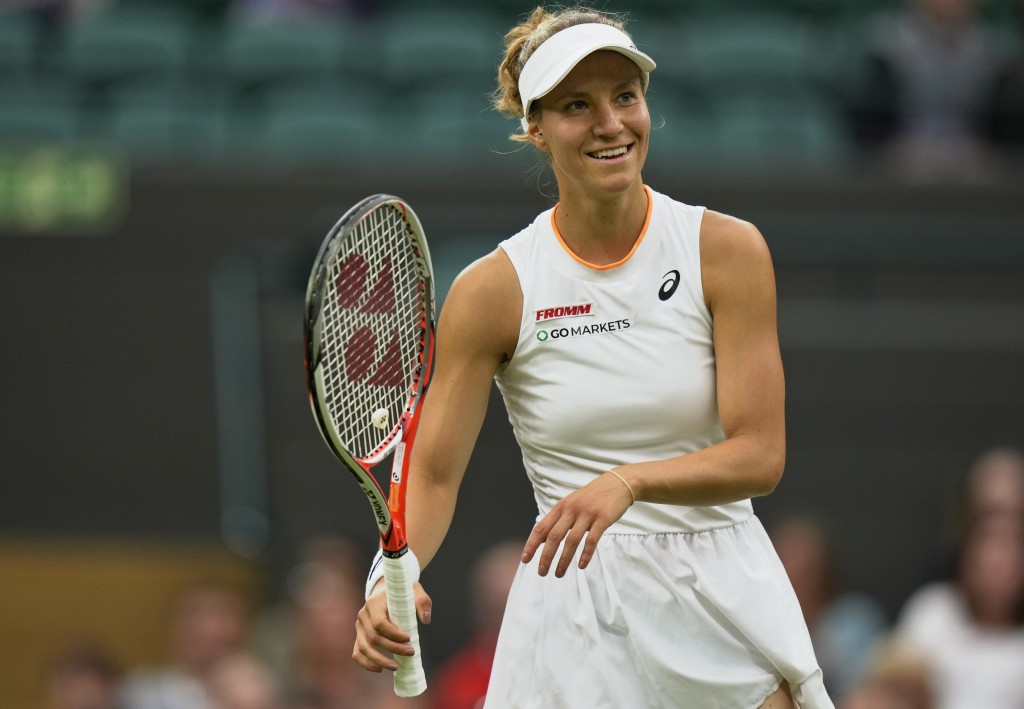 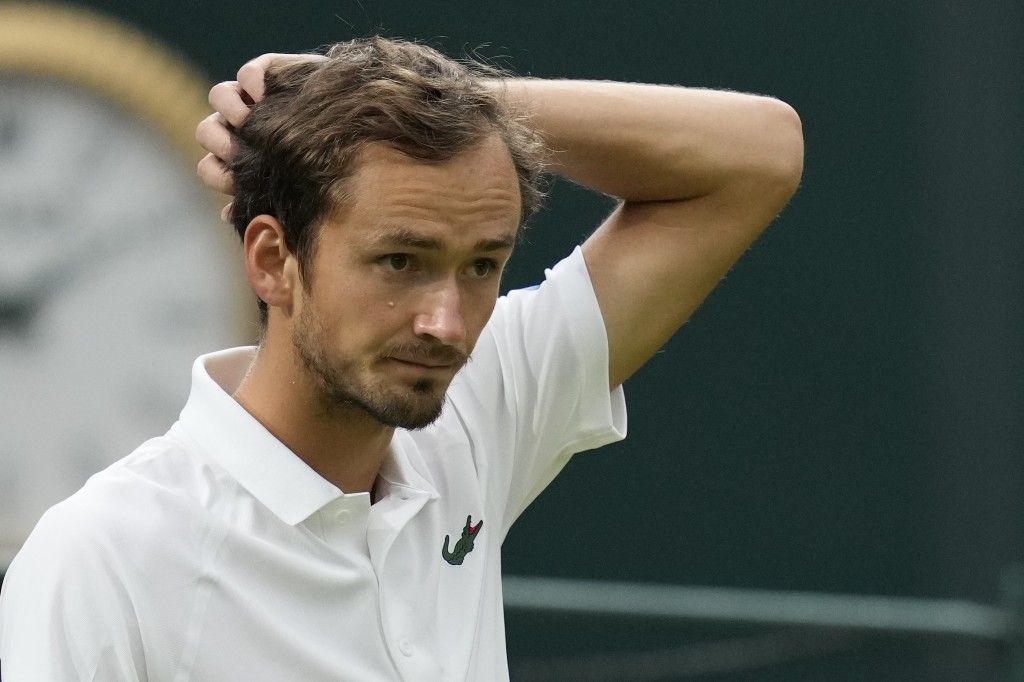 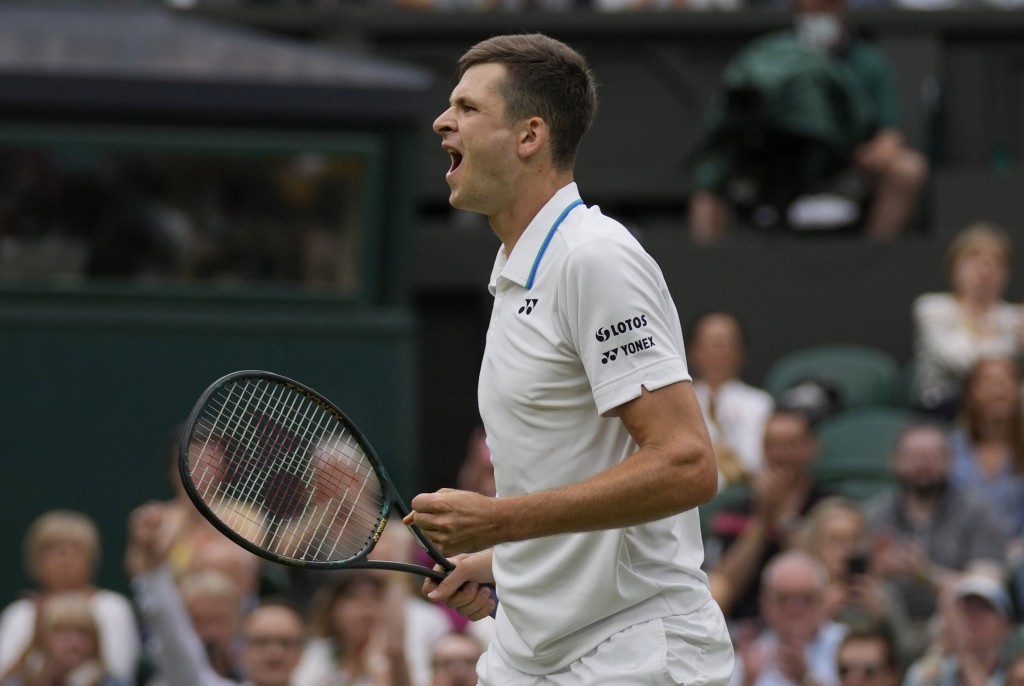 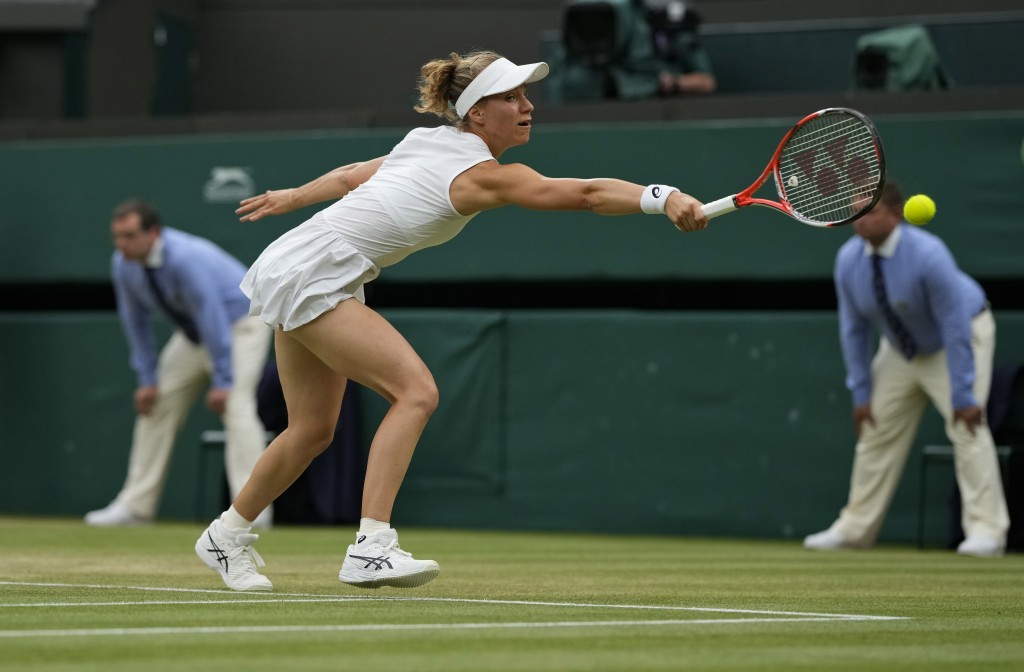 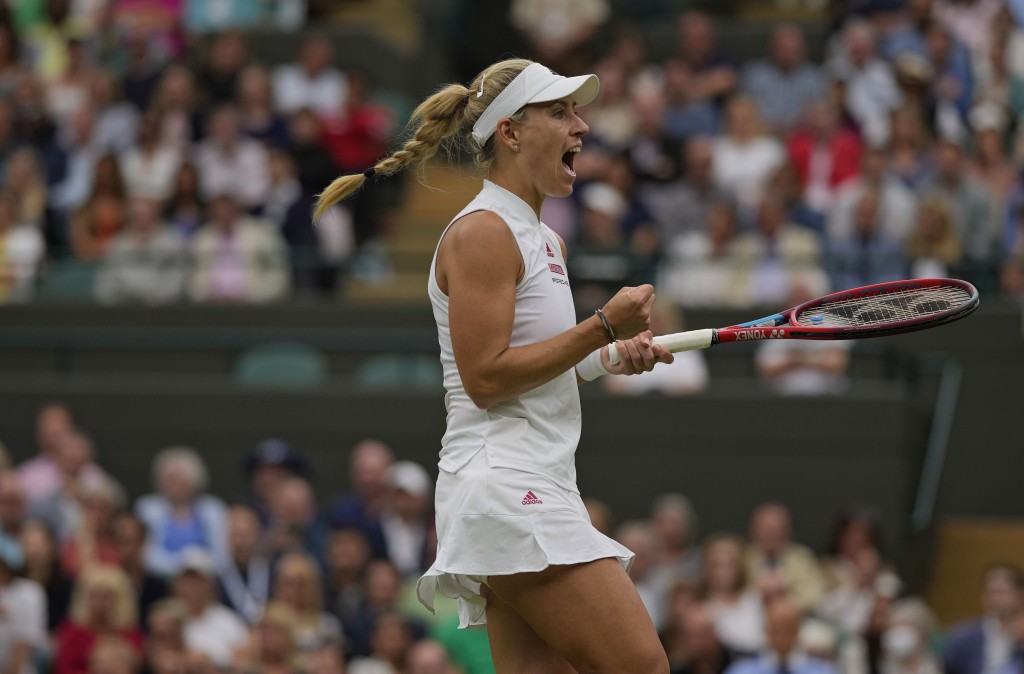 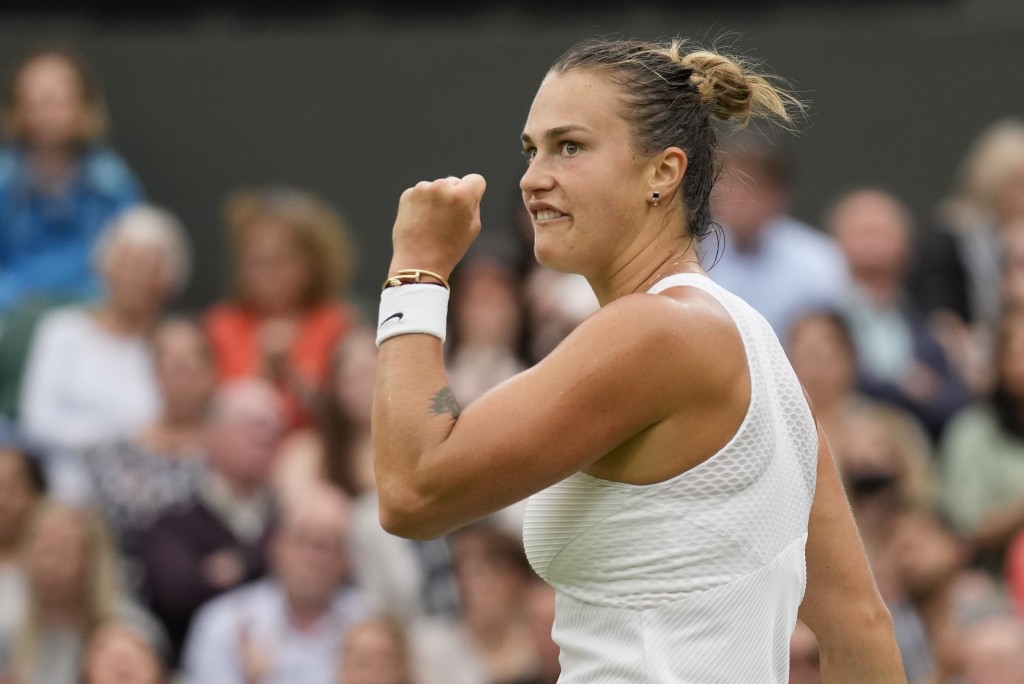 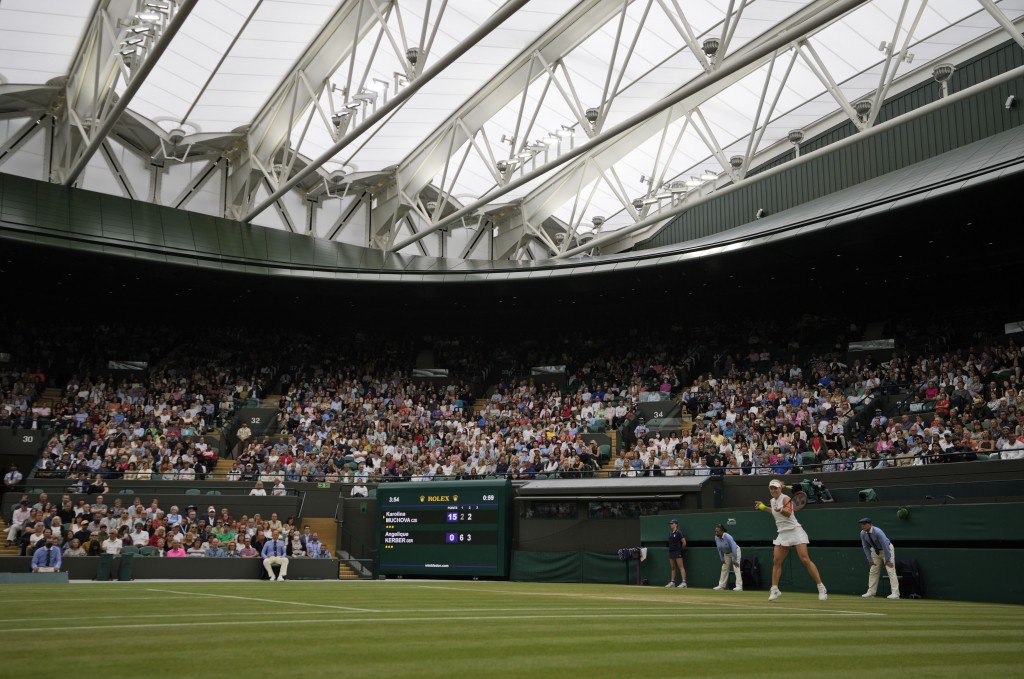 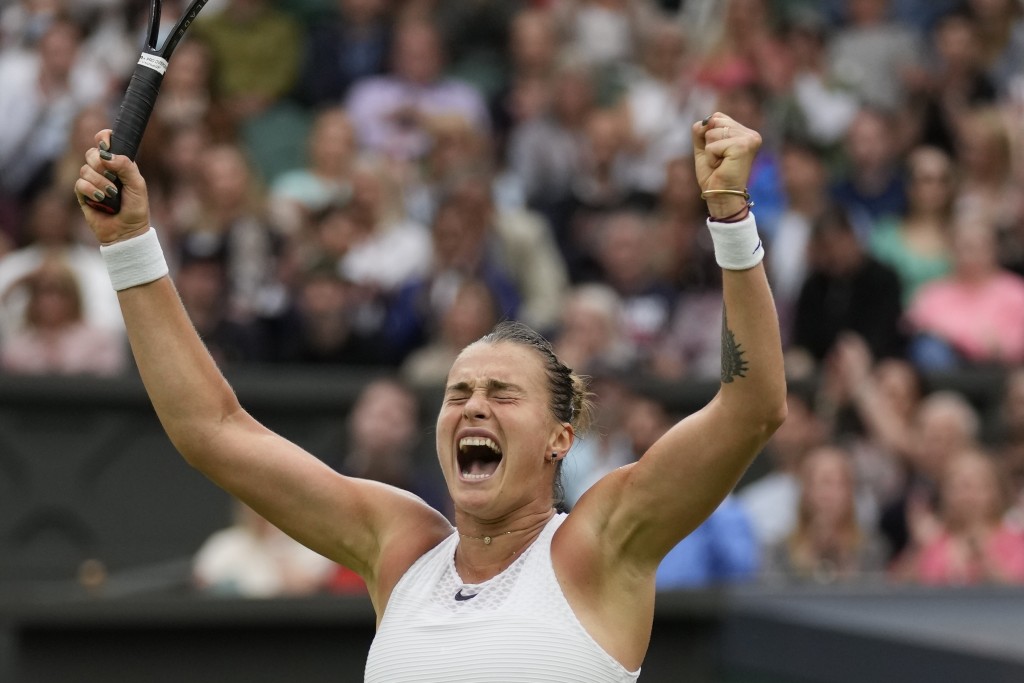 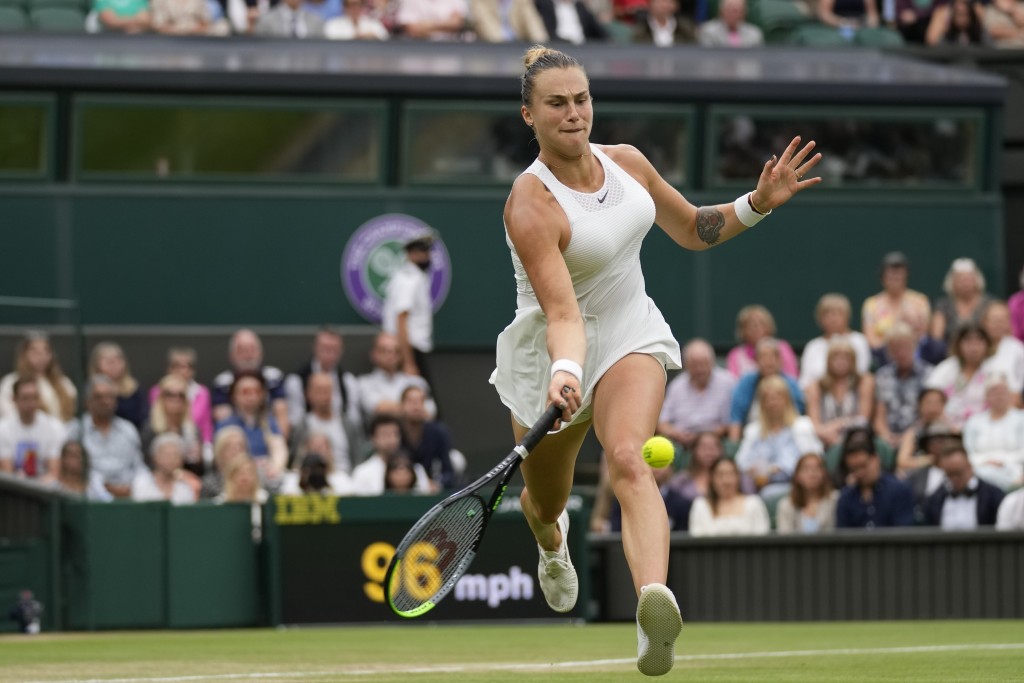 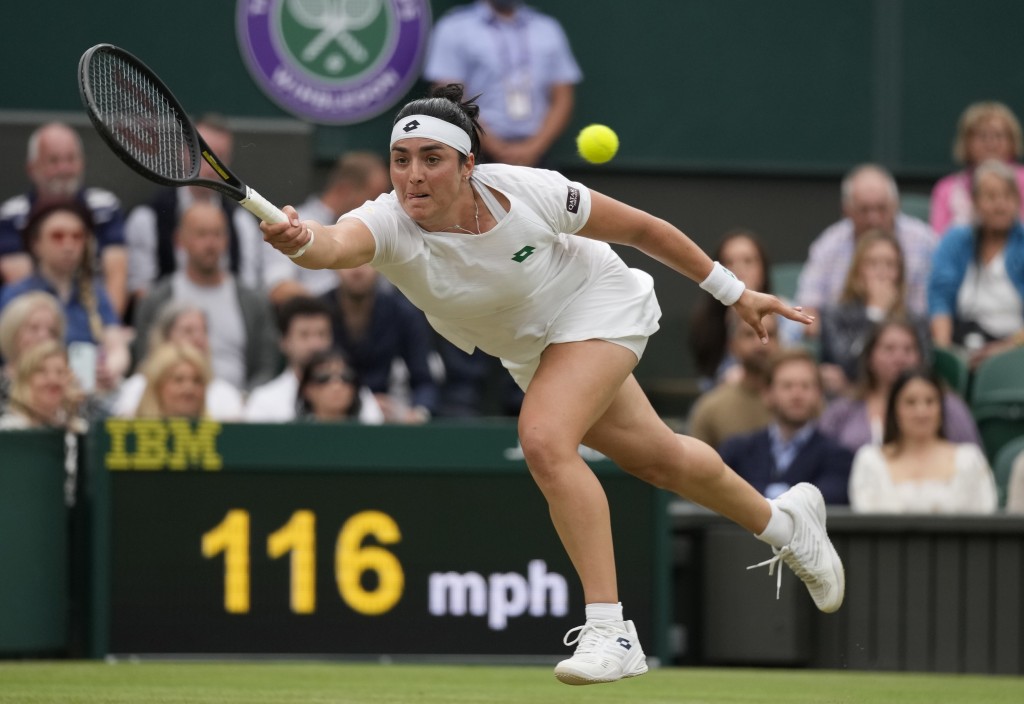 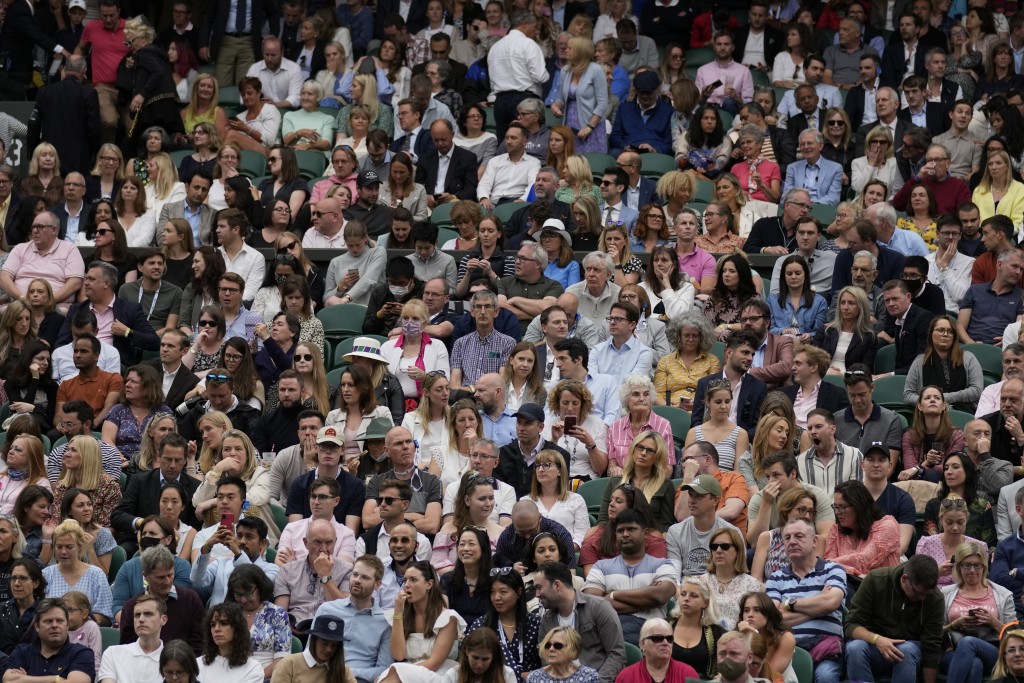 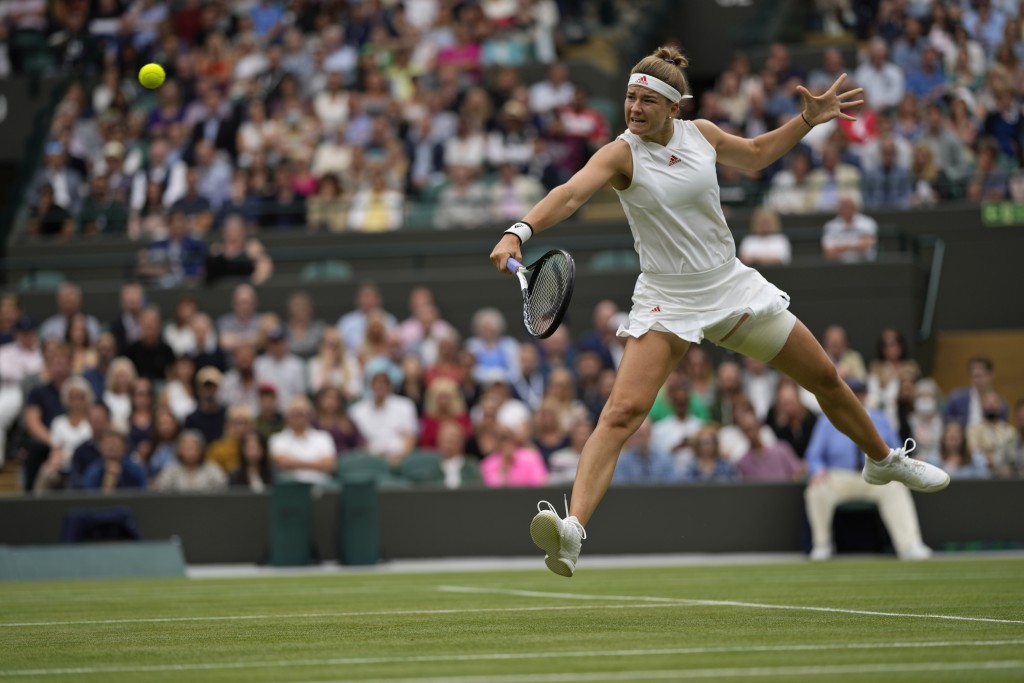 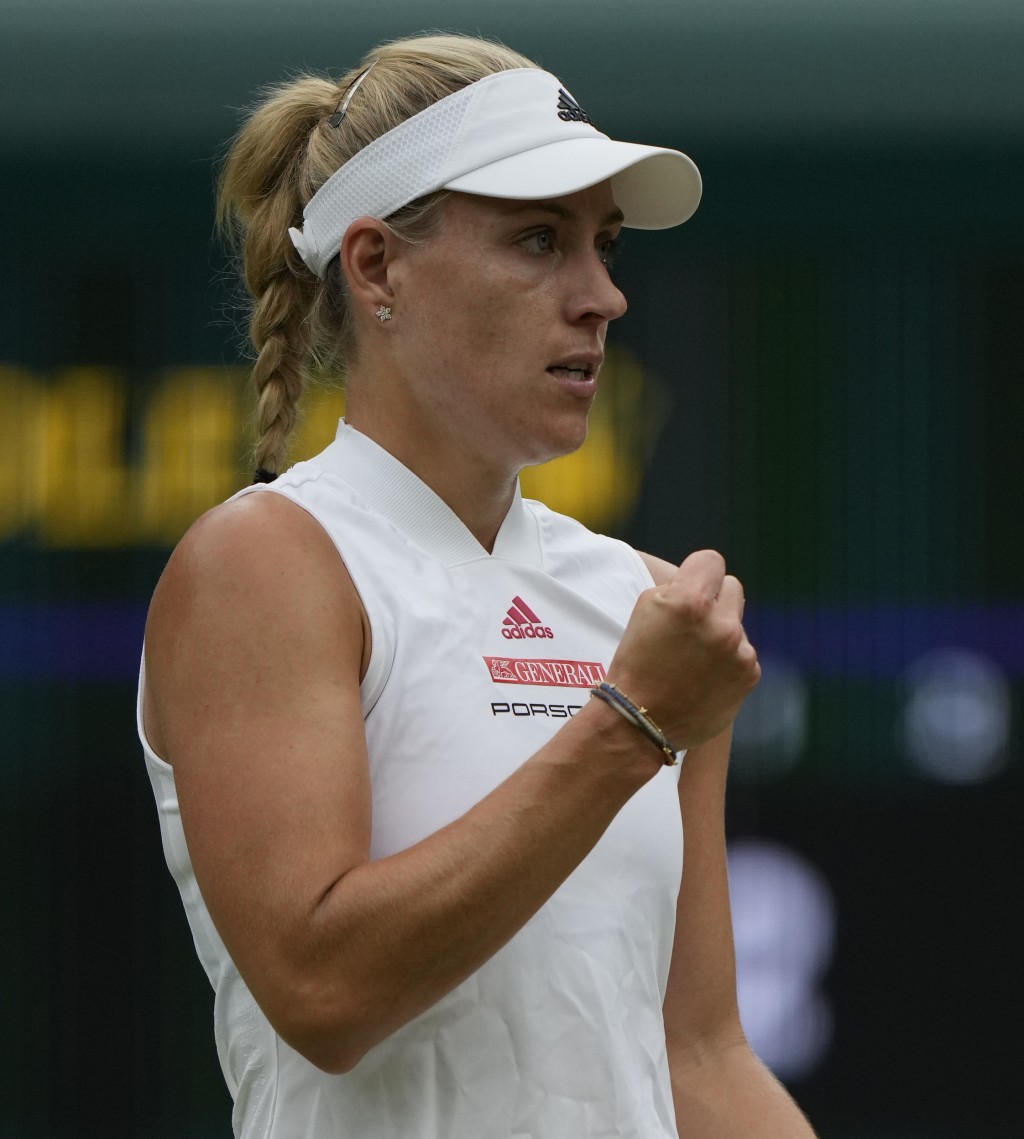 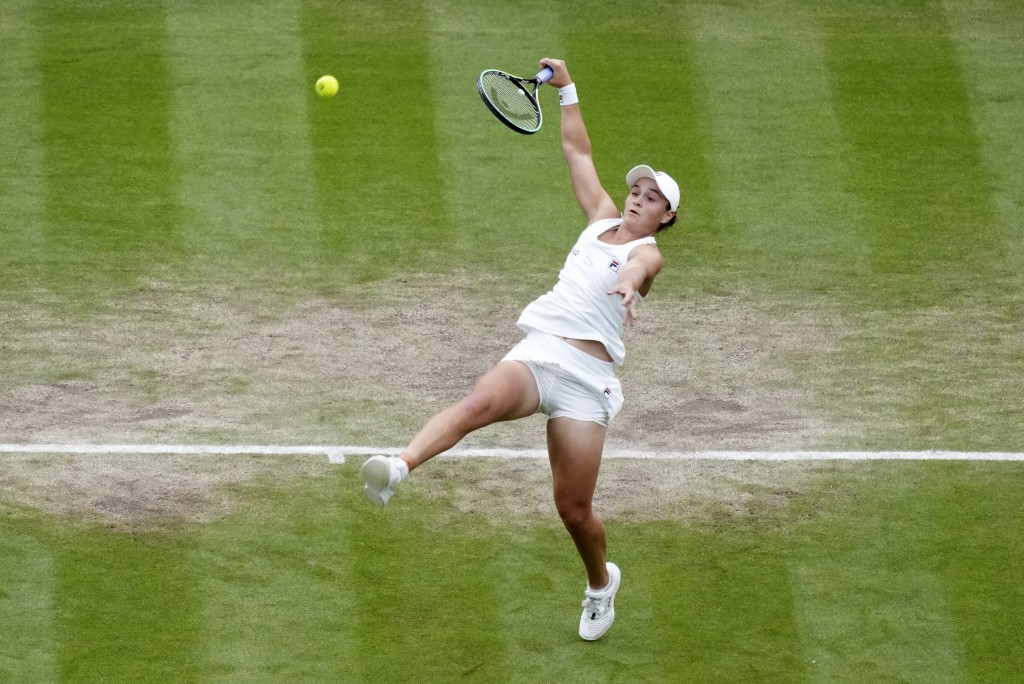 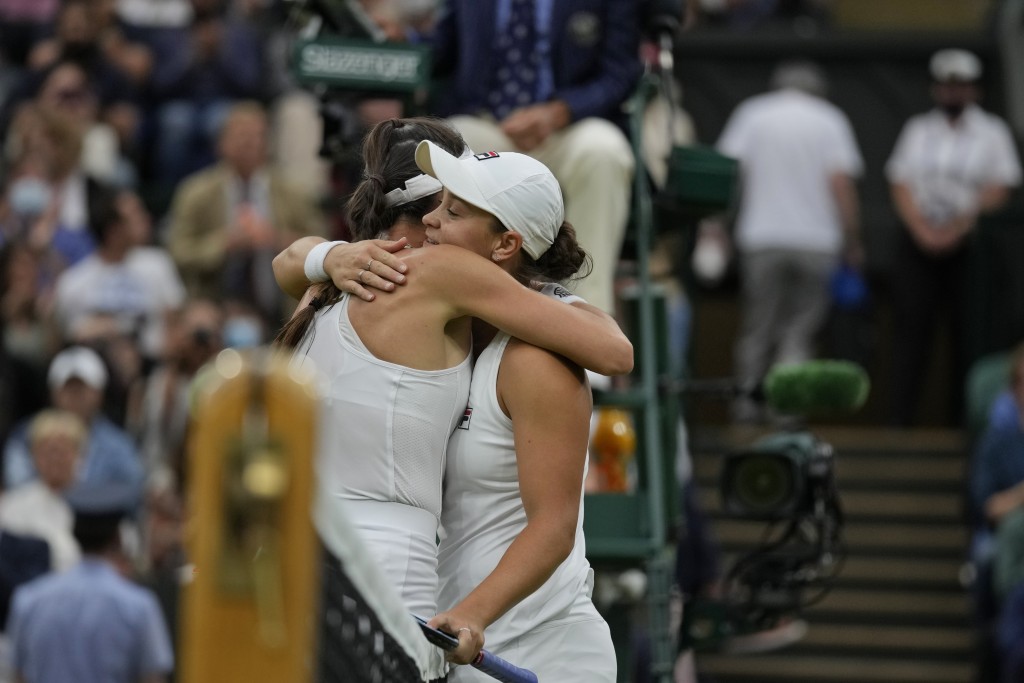 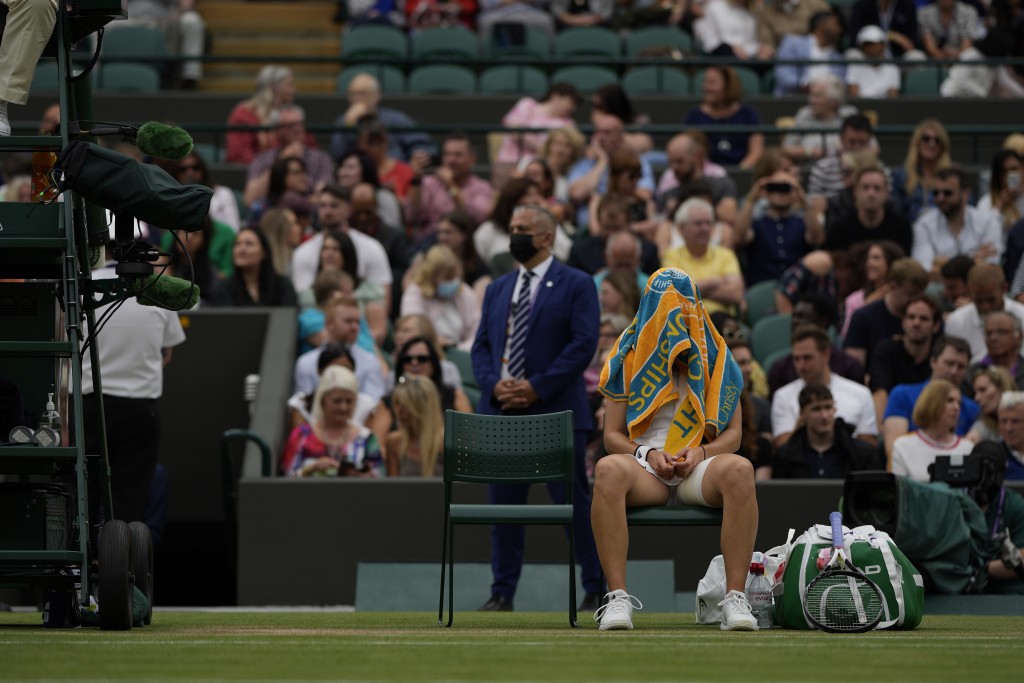 WIMBLEDON, England (AP) — When Angelique Kerber grabbed the opening set of her Wimbledon quarterfinal Tuesday, the full-capacity crowd saluted the accomplishment with cheers that bounced off the closed roof at No. 1 Court.

Kerber's reaction? Just a matter-of-fact, straight-faced stroll to the sideline. No shouts or leaps or fist pumps. Unlike the other women headed to the semifinals at the All England Club, this is not new to her. Not at all. It’s just that it’s been a while.

The owner of three Grand Slam titles, including at Wimbledon in 2018, Kerber moved back into the final four at the grass-court major by using her knee-to-the-turf agility and quick reflexes to beat No. 19 seed Karolina Muchova 6-2, 6-3.

“I remember how I played here,” said Kerber, a 33-year-old left-hander from Germany, who did let loose by shaking her fists when her victory ended. “I know how to play on (a) grass court.”

Next, No. 25 seed Kerber takes on No. 1 Ash Barty, who eliminated 75th-ranked Ajla Tomljanovic 6-1, 6-3 in the first all-Australian major quarterfinal in 40 years.

“It's the ultimate test,” Barty said, looking ahead to Thursday's matchup. “Angie’s obviously had success here before."

Barty won the 2019 French Open, but she had never been to the quarterfinals at the All England Club. Indeed, this was the first time in the Open era, which began in 1968, that the tournament had six first-time women’s quarterfinalists.

Only Kerber and Muchova, who also lost at this stage in 2019, boasted past experience.

The other semifinal is No. 2 seed Aryna Sabalenka against No. 8 Karolina Pliskova.

This was the first day of 100% capacity in the two main stadiums after COVID-19 restrictions placed a 50% cap on attendance when the fortnight began. With rain falling much of the afternoon, the singles matches were played at Centre Court and No. 1 Court with the roofs shut and spectators allowed to be maskless — the All England Club says the arena’s ventilation systems allow them to be considered outdoor venues.

Pliskova — the 2016 U.S. Open runner-up to Kerber — claimed 24 of 26 points on her serve in one stretch, hit eight aces and saved the only three break chances she faced.

“Everything today was working quite well,” said Pliskova, who averaged 106.5 mph on her first serves, 20.5 mph faster than Golubic.

Pliskova has been broken only three times through five matches so far and has not dropped a set.

She also hasn’t played anyone ranked better than 47th yet.

Jabeur’s game is full of novelty and nuance, with drop shots and all manner of angles and spin.

Sabalenka? She is all about power and big cuts at the ball, and even with that constantly aggressive style, she managed to accumulate more winners, 27, than unforced errors, 20.

“She played," Tunisia's Jabeur said, “the match of her life.”

Sabalenka, a 23-year-old from Belarus, hadn't been past the fourth round at any major previously.

But she agreed hers was a “great performance."

“I still have this opportunity to win a Slam,” Sabalenka said. “I will do everything I can to reach my goal.”

Kerber was certainly the best known and most accomplished of the women left in the draw as Tuesday began.

And now she's into her eighth Grand Slam semifinal, with half coming at Wimbledon. The most recent came three years ago, when she upset Serena Williams for the championship.

Kerber extended her current winning streak to 10 matches, including a title at a grass-court tuneup in Germany last month, and her first-round exits on the Australian Open's hard courts in February and French Open's red clay in May seem like forever ago.

“I never stopped to believe in myself (and) how I can play," said Kerber, like Pliskova a former No. 1.

Kerber's game bothered Muchova the same way it troubled 17-year-old American Coco Gauff in the fourth round — with shots steered so quickly, low to the ground and flat.

“She plays good angles. It was a great match from her side,” said Muchova, who draped a towel over her head while sitting during changeovers. “So, definitely, didn’t help me.”

Kerber only compiled 15 winners, but that was enough because she limited Muchova to just two forehand winners herself — compared to a combined 33 unforced or forced errors with that stroke.

Muchova appeared to give herself at least the possibility of turning things around by breaking to lead 2-1 in the second set. But Kerber, so steady if not spectacular, broke right back when Muchova sent a forehand long to cap a 13-stroke exchange.

That was pretty much that.