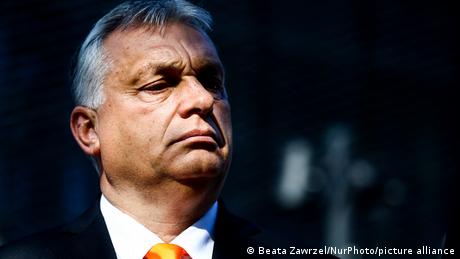 It is the first time a European head of state has appeared on the list.

The group said in Berlin: "Since Viktor Orban and his Fidesz party came to power in 2010, they have brought Hungary's media landscape under their control step by step."

In its listing, RSF noted Orban is the "self-proclaimed champion of 'illiberal democracy,'" adding, "The methods may be subtle or brazen, but they are always efficient."

It added that Orban's "favorite targets" are "independent media holdouts."

The press freedom watchdog noted that the regional press in Hungary has been fully owned by entrepreneurs friendly to Orban since the summer of 2017.

"In the autumn of 2018, almost 500 pro-government media companies were merged into a holding company to centrally coordinate their coverage," the report said.

Hungary is ranked at 92 of 180 countries in this year's RSF World Press Freedom Index.

Who else is among the 'enemies of press freedom'?

In total, 37 heads of government are listed in what RSF has termed its "Predators Gallery."

Two Asian female leaders, Carrie Lam of Hong Kong and Sheika Hasina of Bangladesh, are also counted among the "enemies of press freedom."

Lam, Brazilian President Jair Bolsonaro, and Saudi Crown Prince Mohammed bin Salman are new to the list, which has been published since 2001.

The press freedom group notes bin Salman stands accused of a crime against humanity for the murder of Jamal Khashoggi in the Saudi consulate in Istanbul.