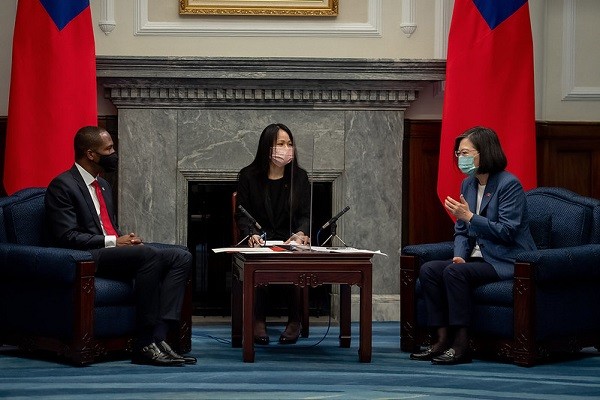 Welcoming Penn on behalf of the Taiwanese government and people, Tsai pointed out that Haiti and Taiwan had marked 65 years as diplomatic allies in April.

She noted that the cooperation between Taipei and Port-au-Prince has spanned the sectors of medicine, public health, education, and agriculture, adding that cooperation on infrastructure projects has also "yielded many results."

The president asked Penn to convey her gratitude to her Haitian counterpart, President Jovenal Moïse, for making the case at the 75th UN General Assembly last year for Taiwan's international participation.

Tsai stated that despite his youth, the 37-year-old diplomat has considerable experience in both the public and private spheres. "His posting to Taiwan shows how highly Haiti values our friendship," she added.

The ambassador has been an active voice in his country's political scene for over a decade.

In 2009, he was tapped to join the team of then-Minister for Women's Rights Jocelyn Lasseague. He has since served as a political consultant for Haiti's Ministry of Justice and Public Security, spokesman for the Haitian Election Commission, and general manager of the public relations company POLITICO Tech.

The Caribbean country is one of Taiwan's 15 diplomatic allies. Remarking on the 65th anniversary of diplomatic relations on April 25, Moïse described the relationship as "never shaken."